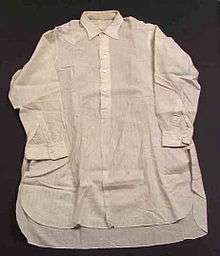 A shirt is a cloth garment for the upper body.

Originally an undergarment worn exclusively by men and women it has become, in American English, a catch-all term for a broad variety of upper-body garments and undergarments. In British English, a shirt is more specifically a garment with a collar, sleeves with cuffs, and a full vertical opening with buttons or snaps (North Americans would call that a "dress shirt", a specific type of "collared shirt"). A shirt can also be worn with a necktie under the shirt collar.

The world's oldest preserved garment, discovered by Flinders Petrie, is a "highly sophisticated" linen shirt from a First Dynasty Egyptian tomb at Tarkan, c. 3000 BC: "the shoulders and sleeves have been finely pleated to give form-fitting trimness while allowing the wearer room to move. The small fringe formed during weaving along one edge of the cloth has been placed by the designer to decorate the neck opening and side seam."[1]

The shirt was an item of men's underwear until the twentieth century.[2] Although the woman's chemise was a closely related garment to the man's, it is the man's garment that became the modern shirt.[3] In the Middle Ages, it was a plain, undyed garment worn next to the skin and under regular garments. In medieval artworks, the shirt is only visible (uncovered) on humble characters, such as shepherds, prisoners, and penitents.[4] In the seventeenth century, men's shirts were allowed to show, with much the same erotic import as visible underwear today.[5] In the eighteenth century, instead of underpants, men "relied on the long tails of shirts ... to serve the function of drawers.[6] Eighteenth-century costume historian Joseph Strutt believed that men who did not wear shirts to bed were indecent.[7] Even as late as 1879, a visible shirt with nothing over it was considered improper.[2]

The shirt sometimes had frills at the neck or cuffs. In the sixteenth century, men's shirts often had embroidery, and sometimes frills or lace at the neck and cuffs and through the eighteenth century long neck frills, or jabots, were fashionable.[8][9] Coloured shirts began to appear in the early nineteenth century, as can be seen in the paintings of George Caleb Bingham. They were considered casual wear, for lower-class workers only, until the twentieth century. For a gentleman, "to wear a sky-blue shirt was unthinkable in 1860 but had become standard by 1920 and, in 1980, constituted the most commonplace event."[10]

European and American women began wearing shirts in 1860, when the Garibaldi shirt, a red shirt as worn by the freedom fighters under Giuseppe Garibaldi, was popularized by Empress Eugénie of France.[11][12] At the end of the nineteenth century, the Century Dictionary described an ordinary shirt as "of cotton, with linen bosom, wristbands and cuffs prepared for stiffening with starch, the collar and wristbands being usually separate and adjustable".

The first documented appearance of the expression “To give the shirt off one’s back,” happened in 1771 as an idiom that indicates extreme desperation or generosity and is still in common usage. In 1827 Hannah Montague, a housewife in upstate New York, invents the detachable collar. Tired of constantly washing her husband’s entire shirt when only the collar needed it, she cut off his collars and devised a way of attaching them to the neckband after washing. It wasn't until the 1930's that collar stays became popular, although these early accessories resembled tie clips more than the small collar stiffeners available today. They connected the collar points to the necktie, keeping them in place [13]

Many terms are used to describe and differentiate types of shirts (and upper-body garments in general) and their construction. The smallest differences may have significance to a cultural or occupational group. Recently, (late twentieth century) it has become common to use tops to carry messages or advertising. Many of these distinctions apply to other upper-body garments, such as coats and sweaters.

Shirts with long sleeves may further be distinguished by the cuffs:

Some combinations are not applicable, e.g. a tube top cannot have a collar.

There are two main categories of fibres used: natural fibre and man-made fibre (synthetics or petroleum based). Some natural fibres are linen, the first used historically, hemp, cotton, the most used, ramie, wool, silk and more recently bamboo or soya. Some synthetic fibres are polyester, tencel, viscose, etc. Polyester mixed with cotton (poly-cotton) is often used. Fabrics for shirts are called shirtings. The four main weaves for shirtings are plain weave, oxford, twill and satin. Broadcloth, poplin and end-on-end are variations of the plain weave. After weaving, finishing can be applied to the fabric.

In the 1920s and 1930s, fascists wore different coloured shirts:

In addition, red shirts have been used to symbolize a variety of different political groups, including Garibaldi's Italian revolutionaries, nineteenth century American street gangs, and socialist militias in Spain and Mexico during the 1930s.

Different colored shirts signified the major opposing sides that featured prominently in the 2008 Thai political crisis, with red having been worn by the supporters of the populist People's Power Party (PPP), and yellow being worn by the supporters of the royalist and anti-Thaksin Shinawatra movement the People's Alliance for Democracy (PAD). Each side is commonly referred to as the 'red shirts' and 'yellow shirts' respectively, though the later opponents of the later Thaksin supporting groups have largely ceased wearing yellow shirts to protest rallies.

In the UK, the Social Credit movement of the thirties wore green shirts.