This article is about publishing colophons. For other uses, see Colophon (disambiguation).

In publishing, a colophon is a brief statement containing information about the publication of a book such as the place of publication, the publisher, and the date of publication. A colophon may also be emblematic or pictorial in nature. Colophons were formerly printed at the ends of books, but in modern works they are usually located at the verso of the title-leaf. 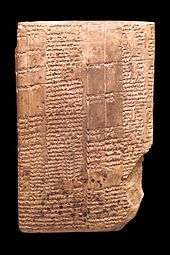 The term colophon derives from the Late Latin colophōn, from the Greek κολοφών (meaning "summit" or "finishing touch").[1] It should not be confused with Colophon, an ancient city in Asia Minor, after which "colophony", or rosin (ronnel), is named.

The term is also applied to clay tablet inscriptions appended by a scribe to the end of an Ancient Near East (e.g., Early/Middle/Late Babylonian, Assyrian, Canaanite) text such as a chapter, book, manuscript, or record. The colophon usually contained facts relative to the text such as associated person(s) (e.g., the scribe, owner, or commissioner of the tablet), literary contents (e.g., a title, "catch phrases" (repeated phrases), or number of lines), and occasion or purpose of writing. Colophons and catch phrases helped the reader organize and identify various tablets, and keep related tablets together. Positionally, colophons on ancient tablets are comparable to a signature line in modern times. Bibliographically, however, they more closely resemble the imprint page in a modern book.

Examples of colophons in ancient literature may be found in the compilation The Ancient Near East: Supplementary Texts and Pictures Relating to the Old Testament (2nd ed., 1969).[2] Colophons are also found in the Pentateuch, where an understanding of this ancient literary convention illuminates passages that are otherwise unclear or incoherent. Examples are Numbers 3:1, where a later (and incorrect) chapter division makes this verse a heading for the following chapter instead of interpreting it properly as a colophon or summary for the preceding two chapters, and Genesis 37:2a, a colophon that concludes the histories (toledot) of Jacob.

An extensive study of the eleven colophons found in the book of Genesis was done by Percy John Wiseman.[3] Wiseman's study of the Genesis colophons, sometimes described as the Wiseman hypothesis, has a detailed examination of the catch phrases mentioned above that were used in literature of the second millennium B.C. and earlier in tying together the various accounts in a series of tablets. 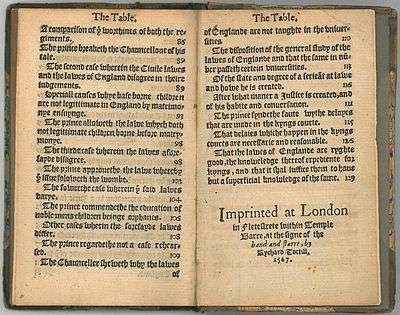 The colophon of John Fortescue's A Learned Commendation of the Politique Lawes of Englande (1567),[4] which appears at the end of the book

In early printed books the colophon, when present, was a brief description of the printing and publication of the book, giving some or all of the following data: the date of publication, the place of publication or printing (sometimes including the address as well as the city name), the name(s) of the printer(s), and the name(s) of the publisher(s), if different. Sometimes additional information, such as the name of a proofreader or editor, or other more-or-less relevant details, might be added. A colophon might also be emblematic or pictorial rather than in words.[1] The normal position for a colophon was after the explicit (the end of the text, often after any index or register). After around 1500 these data were often transferred to the title page, which sometimes existed in parallel with a colophon.

Colophons sometimes contained book curses, as this was the one place in a medieval manuscript where a scribe was free to write what he wished. Such curses tend to be unique to each book.[5]

In Great Britain colophons grew generally less common in the 16th century. The statements of printing which appeared (under the terms of the Unlawful Societies Act 1799)[6] on the verso of the title-leaf and final page of each book printed in Britain in the 19th century are not, strictly speaking, colophons, and are better referred to as "printers' imprints" or "printer statements".

With the development of the private press movement from around 1890, colophons became conventional in private press books, and often included a good deal of additional information on the book, including statements of limitation, data on paper, ink, type and binding, and other technical details. Some such books include a separate "Note about the type", which will identify the names of the primary typefaces used, provide a brief description of the type's history and a brief statement about its most identifiable physical characteristics.

Some commercial publishers took up the use of colophons, and began to include similar details in their books, either at the end of the text (the traditional position) or on the verso of the title-leaf. Such colophons might identify the book's designer, the software used, the printing method, the printing company, the typeface(s) used in the page design and the kind of ink, paper and its cotton content.[7] Book publishers Alfred A. Knopf, the Folio Society and O'Reilly Media are notable for their substantial colophons.