This article is about the drainage basin of the Columbia River. For the desert of the same name, see Columbia Plateau (ecoregion). 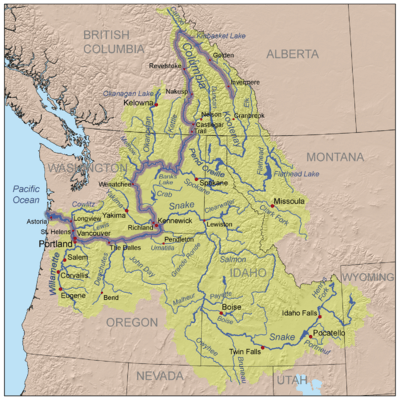 The Columbia Basin is the drainage basin of the Columbia River in the Pacific Northwest region of North America. It covers 668,000 km2 or 258,000 sq mi.[1] In common usage, the term often refers to a smaller area, generally the portion of the drainage basin that lies within eastern Washington.[1]

Usage of the term "Columbia Basin" in British Columbia generally refers only to the immediate basins of the Columbia and Kootenay Rivers and excludes that of the Okanagan, Kettle and Similkameen Rivers.

The Columbia Basin includes the southeastern portion of the Canadian province of British Columbia, most of the U.S. states of Idaho, Oregon, and Washington, the western part of Montana, and very small portions of Nevada, Utah, and Wyoming. The south and southeastern drainage divide borders the interior drainage of the northern Great Basin. To the northeast the region borders the basins of the Saskatchewan River (Hudson Bay) and the MacKenzie River (Beaufort Sea), and to the northwest the basin of the Fraser River. The Columbia Basin extends from the Rocky Mountains in the east through the Cascade Range to the Columbia River's outflow at the Pacific Ocean in the west.

The Columbia River pours more water into the Pacific Ocean than any other river in North or South America. In its 1,270 miles (2,040 km) course to the Pacific Ocean, the Columbia flows through four mountain ranges—the Rockies, Selkirks, Cascades, and coastal mountains—and drains 258,000 square miles (668,000 km2). The mainstem of the Columbia rises in Columbia Lake on the west slope of the Rocky Mountain Range in Canada. Its largest tributary, the Snake, travels 1,038 miles (1,670 km) from its source in Yellowstone National Park in Wyoming before joining the Columbia. When Lewis and Clark explored the region in the early 19th century, huge numbers of fish (salmon) returned to spawn every year. "The multitudes of this fish are almost inconceivable," Clark wrote in the autumn of 1805. At that time, the Columbia and its tributaries provided 12,935 miles (20,817 km) of pristine river habitat.[2]

Residents of the area surrounding the confluence of the Columbia and Snake rivers—a region centering on the Tri-Cities, Washington metropolitan area—use the term "Columbia Basin" to refer to their own, much smaller region. This usage is roughly synonymous with the Columbia Plateau or roughly equivalent to the relatively unforested area bounded by the Cascades, Blue, Wallowa, and Rocky mountain ranges and the Okanagan Highland. This sense of the term Columbia Basin has expanded from its early focus on the land irrigated by Grand Coulee Dam and the Columbia Basin Project to include other irrigation districts such as the Yakima and Walla Walla valleys.[3] At its center is the Pasco Basin, an area roughly double the size of, and fully containing, the Hanford Site.[1]