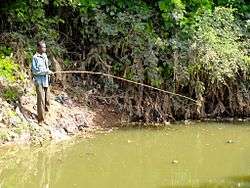 Wild fish are an example of common goods. They are non-excludable, as it is impossible to prevent people from catching fish. They are, however, rivalrous, as the same fish cannot be caught more than once.

Common goods are defined in economics as goods which are rivalrous and non-excludable. Thus, they constitute one of the four main types of the most common typology of goods based on the criteria:

One modern example is climate stability.[1] Another is limited employment in terms of jobs available in an economy, which could be farmed out overseas or populated by cheap migrants. More classic examples of common goods are water and air. Water and air can be polluted: water flows can be tapped beyond sustainability, and air is often used in combustion, whether by motor vehicles, smokers, factories, wood fires. In the production process these resources and others are changed into finished products such as food, shoes, toys, furniture, cars, houses and televisions. Another example of a private exploitation treated as a renewable resource and commonly cited have been trees or timber at critical stages (used for wood and paper), oil (used for plastic, paints, foam, fabric, and often burned to create energy), mined metals (used to create machines, tools, nails, cans, coins), and crops (to become cotton and many kinds of foods). Fish stocks in international waters are also cited often. In this later example (avoiding any issues of the natural rights of the fish), while legal excluded from fishing may not apply, when fish are withdrawn from the water without any limits being imposed, living stocks of fish are likely to be depleted for any later fishermen. To describe situations in which economic users withdraw resources to secure short-term gains without regard for the long-term consequences, the term tragedy of the commons was coined. For example, forest exploitation leads to barren lands, and overfishing leads to a reduction of overall fish stocks, both of which eventually result in diminishing yields to be withdrawn periodically.

Debates about sustainability can be both philosophical and scientific.[2][3][4] However, wise use advocates consider common goods which are an exploitable form of a renewable resource, such as fish stocks, grazing land, etc., to be sustainable in the following two cases: