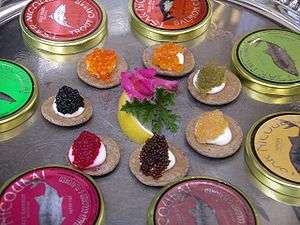 Seven different types of caviar. Total Demand for this seafood is a convex function of household income, making it a superior good.[1]

Superior goods make up a larger proportion of consumption as income rises, and therefore are a type of normal goods in consumer theory. Such a good must possess two economic characteristics: it must be scarce, and, along with that, it must have a high price.[1] The scarcity of the good can be natural or artificial; however, the general population (i.e., consumers) must recognize the good as distinguishably better. Possession of such a good usually signifies "superiority" in resources, and usually is accompanied by prestige.

The prestige-value of some superior goods is so high that a price decline would lower demand; these are the fabled Veblen goods.

The income elasticity of a superior good is above one by definition, because it raises the expenditure share as income rises. A superior good also may be a luxury good that is not purchased at all below a certain level of income. Examples would include smoked salmon and caviar,[1] and most other delicacies. On the other hand, superior goods may have a wide quality distribution, such as wine and holidays; however, though the number of such goods consumed may stay constant even with rising wealth, the level of spending will go up, to secure a better experience.

The choice of the word "superior" to define goods of this type suggests that they are the antonym of "inferior goods", but this is misleading; an inferior good can never be a superior good, but many goods are neither superior nor inferior. If the quantity of an item demanded increases with income, but not by enough to increase the share of the budget spent on it, then it is only a normal good and is not a superior good.

Some texts on microeconomics use the term Superior good as the sole alternative to an inferior good, making "superior goods" and "normal goods" synonymous. Where this is done, a product making up an increasing share of spending under income increases is often called an Ultra-superior good.

This article is issued from Wikipedia - version of the 8/3/2015. The text is available under the Creative Commons Attribution/Share Alike but additional terms may apply for the media files.