Comparison is a feature in the morphology or syntax of some languages, whereby adjectives and adverbs are inflected or modified to indicate the relative degree of the property defined by the adjective or adverb. The comparative expresses a comparison between two (or more) entities or groups of entities in quality, quantity, or degree; the superlative is the form of an adverb or adjective that is the greatest degree of a given descriptor.

The grammatical category associated with comparison of adjectives and adverbs is degree of comparison. [1] The usual degrees of comparison are the positive, which simply denotes a property (as with the English words big and fully); the comparative, which indicates greater degree (as bigger and more fully); and the superlative, which indicates greatest degree (as biggest and most fully).[2] Some languages have forms indicating a very large degree of a particular quality (called elative in Semitic linguistics). Other languages (e.g. English) can express lesser degree, e.g. beautiful, less beautiful, least beautiful.

The comparative is frequently associated with adjectives and adverbs because these words take the -er suffix or modifying word more or less (e.g., faster, more intelligent, less wasteful); it can also, however, appear when no adjective or adverb is present, for instance with nouns (e.g., more men than women). One preposition, near, also has a superlative form, as in Find the restaurant nearest your house.

Formation of comparatives and superlatives

Comparatives and superlatives may be formed morphologically, by inflection, as with the English and German -er and -(e)st forms, or syntactically, as with the English more... and most... and the French plus... and le plus... forms. Common adjectives and adverbs often produce irregular forms, such as better and best (from good) and less and least (from little/few) in English, and meilleur (from bon) and mieux (from the adverb bien) in French.

Most if not all languages have some means of forming the comparative, although these means can vary significantly from one language to the next.

Comparatives are often used with a conjunction or other grammatical means to indicate with what the comparison is being made, as with than in English, als in German, etc. In Russian and Greek (Ancient, Koine and Modern) this can be done by placing the compared noun in the genitive case. With superlatives, the class of things being considered for comparison may be indicated, as in "the best swimmer out of all the girls".

Languages also possess other structures for comparing adjectives and adverbs; English examples include "as... as" and "less/least...".

А few languages apply comparison to nouns and even verbs. One such language is Bulgarian, where expressions like "по̀ човек (po chovek), най човек (nay chovek), по-малко човек (po malko chovek)" (literally more person, most person, less person but normally better kind of a person, best kind of person, not that good kind of a person) and "по̀ обичам (po obicham), най-малко обичам (nay malko obicham)" (I like more, I like the least) are quite usual.[3]

Usage when considering only two things

In many languages, including English, traditional grammar requires the comparative form to be used when exactly two things are being considered, even in constructions where the superlative would be used when considering a larger number. For instance, "May the better man win" would be considered correct if there are only two individuals competing. However, this rule is not always observed in informal usage; the form "May the best man win" will often be used in that situation, as it would if there were three or more competitors involved.[4]

Rhetorical use of unbalanced comparatives

In some contexts, such as advertising or political speeches, absolute and relative comparatives are intentionally employed in a way that invites a comparison, and yet the basis of comparison is not established. This is a common rhetorical device used to create an implication of significance where one may not actually be present. Although such usage is common, it is sometimes considered ungrammatical.[4]

English has two parallel systems of comparison, a morphological one formed using the suffixes -er (the "comparative") and -est (the "superlative"), with some irregular forms; and a syntactic one, formed with the adverbs "more" and "most".

As a general rule, words with one syllable require the suffix (except for the four words: fun, real, right, wrong), words with three or more syllables require "more" or "most", and words with two syllables may use one system or the other; which words use which system is a matter of idiom. Some adjectives, e.g. 'polite', can use either form, with different frequencies according to context.[5]

Morphological comparison uses the suffixes -er (the "comparative") and -est (the "superlative"). These inflections are of Germanic origin and are cognate with the Latin suffixes -ior and -issimus and Ancient Greek -īōn and -istos. They are typically added to shorter words, words of Anglo-Saxon origin, and borrowed words which have been fully assimilated into the English vocabulary. Usually the words which take these inflections have fewer than three syllables.

This system also contains a number of irregular forms, some of which, like "good", "better", and "best", contain suppletive forms. These irregular forms include:

The second system of comparison in English appends the grammatical particles "more" and "most", themselves the irregular comparatives of "many" and "much", to the adjective or adverb being modified. This series can be compared to a system containing the diminutives "less" and "least".

This system is most commonly used with words of French or Latin derivation; with adjectives and adverbs formed with suffixes other than -ly (e.g., "beautiful"); and with longer, technical, or infrequently used words.

Some adjectives, the absolute or ungradable adjectives do not appear to logically allow degrees. Some qualities are either present or absent, such as being Cretaceous or igneous, so it appears illogical to call anything "very Cretaceous", or to characterize something as "more igneous" than something else.

Some grammarians object to the use of the superlative or comparative with words such as full, complete, unique, or empty, which by definition already denote either a totality, an absence, or an absolute.[6] However, such words are routinely and frequently qualified in contemporary speech and writing. This type of usage conveys more of a figurative than a literal meaning, because in a strictly literal sense, something cannot be more or less unique or empty to a greater or lesser degree.

Many prescriptive grammars and style guides include adjectives for inherently superlative qualities to be ungradable. Thus, they reject expressions such as more perfect, most unique, and most parallel as illogical pleonasms: after all, if something is unique, it is one of a kind, so nothing can be "very unique", or "more unique" than something else.

In most Balto-Slavic languages (such as Czech, Polish, Lithuanian and Latvian), the comparative and superlative forms are also declinable adjectives.

In contrast to English, the relative and the superlative are joined into the same degree (the superlative), which can be of two kinds: comparative (e.g. "the most beautiful") and absolute (e.g. "very beautiful").

French: The superlative is created from the comparative by inserting the definitive article (la, le, or les), or the possessive article (mon, ton, son, etc.), before "plus" or "moins" and the adjective determining the noun. For instance: Elle est la plus belle femme → (she is the most beautiful woman); Cette ville est la moins chère de France → (this town is the least expensive in France); C'est sa plus belle robe → (It is her most beautiful dress). It can also be created with the suffixe "-issime" but only with certain words, for example: "C'est un homme richissime" → (That is the most rich man). Its use is often rare and ironic.

Spanish: The comparative superlative, like in French, has the definite article (such as "las" or "el"), or the possessive article ("tus," "nuestra," "su," etc.), followed by the comparative ("más" or "menos"), so that "el meñique es el dedo más pequeño" or "el meñique es el más pequeño de los dedos" is "the pinky is the smallest finger." Irregular comparatives are "mejor" for "bueno" and "peor" for "malo," which can be used as comparative superlatives also by adding the definite article or possessive article, so that "nuestro peor error fue casarnos" is "our worst mistake was to get married."

The absolute superlative is normally formed by modifying the adjective by adding -ísimo, -ísima, -ísimos or -ísimas, depending on the gender or number. Thus, "¡Los chihuahuas son perros pequeñísimos!" is "Chihuahuas are such tiny dogs!" Some irregular superlatives are "máximo" for "grande," "pésimo" for "malo," "ínfimo" for "bajo," "óptimo" for "bueno," "acérrimo" for "acre," "paupérrimo" for "pobre," "celebérrimo" for "célebre."

Scottish Gaelic: When comparing one entity to another in the present or the future tense, the adjective is changed by adding an e to the end and i before the final consonant(s) if the final vowel is broad. Then, the adjective is preceded by "nas" to say "more," and as to say "most." (The word na is used to mean than.) Adjectives that begin with f are lenited. and as use different syntax constructions. For example: Tha mi nas àirde na mo pheathraichean. → I am taller than my sisters. Is mi as àirde. → I am the tallest.

In other tenses, nas is replaced by na bu and as by a bu, both of which lenite the adjective if possible. If the adjective begins with a vowel or an f followed by a vowel, the word bu is reduced to b'. For example:

Welsh is similar to English in many respects. The ending -af is added onto regular adjectives in a similar manner to the English -est, and with (most) long words mwyaf precedes it, as in the English most. Also, many of the most common adjectives are irregular. Unlike English, however, when comparing just two things, the superlative must be used, e.g. of two people - John ydy'r talaf (John is the tallest). 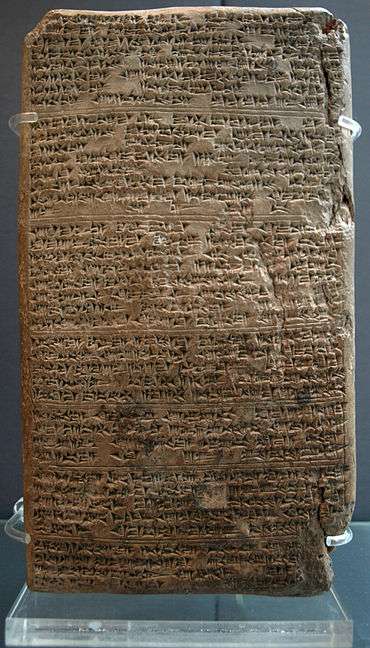 In Akkadian cuneiform, (on a 12 paragraph clay tablet), from the time period of the 1350 BC Amarna letters (a roughly 20-year body of letters), two striking examples of the superlative extend the common grammatical use. The first is the numeral "10," as well as "7 and 7." The second is a verb-spacement adjustment.

The numeral 10 is used for ten times greater in EA 19, Love and Gold, one of King Tushratta's eleven letters to the Pharaoh-(Amenhotep IV-Akhenaton). The following quote using 10, also closes out the small paragraph by the second example of the superlative, where the verb that ends the last sentence is spread across the letter in s-p-a-c-i-n-g, to accentuate the last sentence, and the verb itself (i.e. the relational kingly topic of the paragraph):

".... Now, in keeping with our constant and mutual love, you have made it 10 times greater than the love shown my father. May the gods grant it, and may Teššup, my lord, and Aman make flourish for evermore, just as it is now, this mutual love of ours.[7]:42–46

The actual last paragraph line contains three words: 'may it be', 'flourish', and 'us'. The verb flourish (from napāhu?, to light up, to rise), uses: -e-le-né-ep-pi-, and the spaces. The other two words on the line, are made from two characters, and then one: "...may it be, flourish-our (relations)."