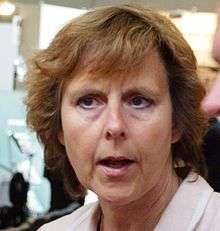 Connie Hedegaard Koksbang (born 15 September 1960) is a Danish politician and public intellectual who was European Commissioner for Climate Action in the (second Barroso) European Commission from 10 February 2010 through 31 October 2014.[1][2][3]

In Denmark, she was a member of the Conservative People's Party (DKF), and was a member of parliament (Folketing) from 10 January 1984 to 3 October 1990. She was also elected a member of the Folketing in the 2005 Danish parliamentary election. Prior to becoming a minister, she worked as a journalist at DR, the Danish national broadcaster.

Connie Hedegaard holds an MA in Literature and History. She has been a member of the Conservative Party and active in government on and off since 1984, when she was elected as the hitherto youngest member of the Folketing, the Danish national parliament, where she sat for six years.[5] In 1990, she left politics to pursue a career in journalism. Over the next 14 years, she worked as a journalist at the newspaper Berlingske Tidende, took the post of Director of DR Radio News, and was the anchor for Deadline, a Danish TV news program.

Diving back into politics in 2004, she became Minister of the Environment. A year later, she became Minister for Nordic Cooperation. After the November 2007 general election, she was chosen as Minister for Climate and Energy. In May 2008, she told Denmark, “Sustainable economic growth is an attainable objective. The Nordic Region has made great progress with solutions based on environmental technology, and some day it will be possible to stockpile energy generated from renewable sources such as windmills, and to run vehicles purely on excess energy.”[6][7]

Hedegaard was also in charge of preparing and hosting the United Nations Climate Change Conference 2009 in Copenhagen.[8]

From 2007, Hedegaard was behind Denmark’s energy policies. In April, she signed an action plan with India on renewable energy.[9] One notable achievement was her role in introducing Denmark’s Energy Policy 2008–2011. The policy made her country the first in the world to commit to an overall energy reduction, not just a reduction in greenhouse gas emissions. It includes the following language.

Taking up her new position at the European Commission on 10 February 2010, Hedegaard stressed the importance of climate change in the 21st century. She hoped that by the end of her five-year term, Europe would be the most climate friendly region in the world. Her priorities would be to implement the European Climate and Energy package and to continue her efforts towards an ambitious international climate agreement.[10]

According to the mandate outlined by President Barroso, her principal responsibilities as Commissioner for Climate Action was to: