The Folketing (Danish: Folketinget, pronounced [ˈfʌlɡ̊ətˢeŋˀð]; lit. the people's thing), also known as the Danish Parliament in English,[1] is the unicameral national parliament (legislature) of the Kingdom of Denmark. Established in 1849, until 1953 the Folketing was the lower house of a bicameral parliament, called the Rigsdag; the upper house was the Landsting. It meets in Christiansborg Palace, on the islet of Slotsholmen in central Copenhagen.

The Folketing passes all laws, approves the cabinet, and supervises the work of the government. It is also responsible for adopting the state's budgets and approving the state's accounts. As set out in the Danish Constitution, the Folketing shares power with the reigning monarch. In practice, however, the monarch's role is limited to signing laws passed by the legislature; this must be done within 30 days of adoption.

The Folketing consists of 179 representatives; 175 from Denmark, 2 from Greenland and a further 2 from the Faroe Islands. General elections must be held every four years, but it is within the powers of the Prime Minister to ask the monarch to call for an election before the term has elapsed. On a vote of no confidence, the Folketing may force a single Minister or the entire government to resign.[2]

Members are democratically elected by proportional representation: 135 by the D'Hondt method and 40 by the Sainte-Laguë method. The Danish political system has traditionally generated coalitions. Most post-war governments have been minority coalitions ruling with the support of non-government parties.[3]

The most recent general election took place on 18 June 2015 and the Folketing reconvened on 6 October. The first sitting of the house was attended by Queen Margrethe II.[4]

From 1849 to 1953 the Folketing was one of the two houses in the bicameral parliament known as the Rigsdag; the other house was known as the Landsting. Since both houses, in principle, had equal power, the terms "upper house" and "lower house" were not generally used. The difference between the houses was voter representation.

The Folketing was elected by common vote among men and consisted mainly of independent farmers, traders, and merchants as well as the educated classes (i.e., the liberal forces of society). From 1866 to 1915 the right of vote for the Landsting was restricted to the wealthiest, and some of its members were appointed by the king, thus it predominantly represented the landed gentry and other conservatives. From 1915 both men and women had the right of vote for both houses, and also the Landsting was elected by common vote, although indirectly and with a higher age limit than for the Folketing. During the next decades, law-making mainly took place in the Folketing and the Landsting came to be regarded as a superfluous rubber stamp. 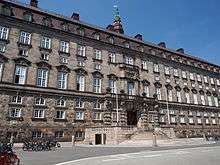 Christiansborg Palace, the location of the Folketing chamber since 1849

In 1953, a revised constitution was adopted by popular vote. Among the changes was the elimination of the Landsting and the introduction of a unicameral parliament, known only as the Folketing. Christiansborg Palace (also known by its nickname Borgen, Danish for the castle) has been the domicile of parliament since 1849. The palace is located in the heart of Copenhagen.

Winning a seat in parliament requires only 2% of the vote. With such a low election threshold, a large number of parties are represented in the chamber, making it all but impossible for one party to win the 90 seats necessary for a majority. No party has achieved this since 1901. All Danish governments since then have been coalitions or one-party minority governments. For this reason, a long-standing provision in the constitution allows a government to take office without getting a vote of confidence and stay in office as long as it does not lose a vote of no confidence. One consequence is that, unlike in most other parliamentary systems, a Danish government can never be sure its legislative agenda will pass, and it must assemble a majority for each individual piece of legislation.

View from the gallery

The 179 members of the folketing are directly elected to four-year terms, subject to calls for early elections. All Danish citizens 18 years or older may vote in legislative elections, which are conducted by secret ballot. Folketing seats are allocated among the various parties using the D'Hondt method of party list proportional representation. A party or electoral alliance must pass the election threshold of 2% of the overall vote to be allocated a seat. Parties select their candidates using a closed list. Thus, voters select the party of their choice, not any specific candidate.

The Danish political system is characterised by a fusion of powers, with the government being drawn from the ranks of the Folketing. Denmark is governed by a Cabinet and a Prime Minister commanding a majority in the Folketing. In order to command a majority and pass laws, the Prime Minister must form alliances with parties outside government, as well as multiple parties within a coalition Cabinet.

During his first term, Lars Løkke Rasmussen, led a centre-right minority government consisting of the Liberal Party (Venstre) and the Conservative People's Party. This coalition government worked with regular parliamentary support from the national conservative Danish People's Party and often gained the necessary 90th seat for majority in the Folketing through negotiations with either the sole MP from the Christian Democrats, Ørum-Jørgensen[6] or another MP outside parties, Christmas Møller, both elected in 2007 as conservative MPs and having defected since then.

Since the 2007 elections, the Liberal Alliance (previously Ny Alliance) have gained momentum in opinion polls, and since early 2010, the governing coalition have not been able to gather a majority in the polls without the support of the Alliance. The continuing rise in the polls is to an extent the result of the internal crisis in the Conservative People's Party over the leadership Lene Espersen[7] and the continuing debate over a lack of "true" liberal/conservative ideology in government policy.[8]

On 13 January 2011, the continuing turmoil within the Conservative group in the Folketing caused Lene Espersen to resign as political leader of the party and focus on her role as Minister of Foreign Affairs.[9] A leadership election between Brian Mikkelsen, the Minister of Economic and Business Affairs and Lars Barfoed, the Justice Minister, was widely expected,[10] but on 14 January the Conservative group in the Folketing unanimously elected Barfoed as their new political leader.[11]

The Social Democrats under the leadership of Helle Thorning-Schmidt have enjoyed continuing majorities in opinion polls since late 2009 and hopes to form a centre-left government coalition consisting of the Socialist People's Party and the Social Liberal Party with parliamentary support from the small Red-Green Alliance.[12][13]

Following the 2015 general election, Thorning-Schmidt has been replaced as Prime Minister by her predecessor Lars Løkke Rasmussen. He leads a government consisting only of Venstre—an extremely unusual situation in Danish politics.

The Speaker is the presiding officer of the Folketing. The Speaker determines which members may speak, and is responsible for maintaining order during debates. The position was created in 1850, and the inaugural holder of the office was Carl Christoffer Georg Andræ. The current Speaker is Pia Kjærsgaard, former leader of the Danish People's Party.[16] The Speaker is nominated by the Prime Minister immediately following a general election and is confirmed by members; the Speaker appoints four deputies.[16]

See also: List of members of the Folketing and Elections in Denmark 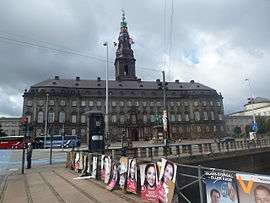 Christiansborg Palace, the seat of the three branches of government: the Folketing, the Prime Minister's Office and the Supreme Court. Here it is surrounded by posters, a typical scene during an election season.