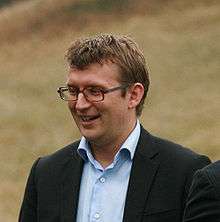 Troels Lund Poulsen (born 30 March 1976) is a Danish politician and has been Minister for Education of Denmark. Prior to that, he became Minister for the Environment following the 2007 Danish parliamentary election. He is member of the parliament for the party Venstre. From September 2006 to November 2007 Troels Lund Poulsen was the spokesman on political affairs for the party.

In late 2011, he became the center of a dispute regarding the disclosure of confidential documents in favor of discrediting the current Danish prime minister, Helle Thorning-Schmidt and her husband Stephen Kinnock due to their tax relations.[1] The affair happened in the 2011 Danish parliamentary election and involved the head of SKAT (The Danish tax agency) Copenhagen (Erling Andersen), the Permanent Secretary of State in the Ministry of Taxes (Peter Loft) and the spindoctor of Troels Lund Poulsen (Peter Arnfeldt).[2]

In the Danish media he is known as "Trolex", because he accepted a Rolex watch as a gift and thereby exploited his political position.