Gallus was said by Ammianus Marcellinus to have been very good looking, making particular note of his soft blond hair.[1]

Gallus was born in Massa Veternensis, Italia, after his father had been recalled from exile. Gallus' father and his elder brother were amongst those killed during the purges that occurred in the imperial family after the death of Constantine I in 337. Gallus himself was one of the only imperial males, outside of the three sons of Constantine I and Fausta, who were not killed; the others being Gallus' younger half-brother, Julian, and their cousin, Nepotian, each of whom was very young at the time.

There is debate over where Gallus spent his youth. One view is that he lived with Julian in Nicomedia under the care of bishop Eusebius of Nicomedia until 340. At which point, Eusebius was made bishop of Constantinople, which necessitated Gallus and Julian to follow him to that city. It is believed that after the death of Eusebius in 341, Constantius then sent Gallus and Julian to continue their studies at the imperial household in Macellum, Cappadocia. An alternative view claims that hints in the sources suggest that Gallus was sent to Ephesus to study, then to a type of exile in Tralles and from there to the imperial household in Macellum. 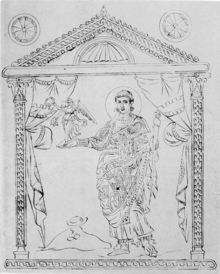 Constantius Gallus in a later copy of the Chronography of 354

Location of Antioch in present-day Turkey

In 350, Magnentius had rebelled and killed the emperor Constans, claiming the purple. Constantius II prepared to move against the usurper, but needed a representative in the East, so he called Gallus at Sirmium, raised him to the rank of caesar (15 March 351), gave him the name Constantius, and strengthened the bonds with his cousin by allowing Gallus to marry his sister Constantina. Gallus and Constantina, who probably shared her brother's aim of controlling the young Caesar, set up residence in Antioch.

During his rule, Gallus had to deal with a Jewish rebellion in Judea/Palestine (see Jewish revolt against Gallus). The rebellion, possibly started before Gallus' elevation to Caesar, was crushed by Gallus' general, Ursicinus, who ordered all the rebels slain.

Gallus was saved from an assassination plot by a woman, who revealed that some members of her household were planning the murder. Some sources, among whom are Joannes Zonaras, claim that this plot had been organized by Magnentius in order to distract Constantius from Magnentius himself.

Some sources (Philostorgius) claim Gallus' generals won a campaign against the Sassanids. Others, basing their views on an almost-peaceful situation between Sassanids and Romans, dismiss this claim. In 354, Gallus sent the comes Orientis, Nebridius, against the Isaurians, who had been raiding the city of Seleucia on the Tigris.

As a consequence of the need to gather food for the troops of a Persian campaign or because of drought, the grain supply in Antioch decreased. In order to counter the higher price of grain, Gallus forced the passage of some laws regardless of the opinion of the Senate, thus alienating the support of the senatorial class of Antioch. Ammianus Marcellinus, a philo-senatorial writer, tells how the anger of the people of Antioch for the famine was diverted by Gallus towards the consularis Syriae Theophilus, who was killed by the mob.

Ammianus reports also that Gallus and Constantina started several trials for magic against wealthy people, ending in the execution of innocents and in the confiscation of their wealth. The same source claims that Gallus walked anonymously in Antioch by night, asking passersby for their opinion on their caesar, while Julian records the great amount of time spent by Gallus at the Hippodrome, probably to obtain popular support.

Doubting his cousin's loyalty, Constantius reduced the troops under Gallus, and sent the Praetorian Prefect Domitianus to Antioch to urge Gallus to go to Italy. Different sources tell different stories, but all agree that Gallus arrested Domitianus and the quaestor Montius Magnus who had come to his aid, and that the two officers were killed.

The arrest of Montius Magnus led to the discovery of what seems to be a plot to elevate an usurper against Gallus. The conspirators had the support of two tribuni fabricarum (officers of the weapons factories) who had promised the weapons for an uprising (Ammianus Marcellinus, 14.7.18), and probably of the troops in Mesopotamia, as well as of the rector of the province of Phoenice. All of those involved in the plot were sentenced to death.

Constantius was informed of the treason trials in Antioch during a campaign against the Alamanni. After concluding a peace treaty with the Germanic tribe, Constantius decided to settle the matter with his cousin.

First he summoned Ursicinus to the West, whom he suspected to have been inciting Gallus in order to create the occasion for a revolt and the usurpation of his own son.

Next, Constantius summoned Gallus and Constantina to Milan. Constantina left first, in order to gain some of her brother's trust, but died at Caeni Gallicani in Bithynia. Gallus, whose bonds to Constantius had been weakened, stayed in Antioch. Constantius tried to lure Gallus, sending the tribunus scutariorum Scudilo to tell Gallus that Constantius wanted to raise him to Augustus. Gallus desiring to finally obtain the rank of Augustus, took Constantius's bait and left Antioch to meet him. Gallus in an exhibition of his presumed soon to be Augustus powers, staged a chariot race in Constantinople's Hippodrome and crowned the victor, an honor reserved only for those that are Augustus. This insolence of Gallus enraged Constantius, further adding to his dislike for the upstart Caesar. In an attempt to further isolate Gallus from any form of military protection, Constantius had the garrisons removed from the towns in Gallus's path.

When Gallus arrived to Poetovio in Noricum, Barbatio, an officer who had been supporting Gallus' dismissal within Constantius' court, surrounded the palace of the caesar and arrested him, stripping Gallus of the imperial robes, but assuring him that no harm would come to him. Gallus was led to Pola, Istria (now Pula, Croatia). Here he was interrogated by some of the highest officials of Constantius' court, including the eunuch praepositus sacri cubiculi Eusebius and the agens in rebus Apodemius. Gallus tried to put the blame of all of his actions on Constantina, but Constantius sentenced him to death; the emperor later changed his mind, and ordered the caesar to be spared, but Eusebius ordered that the news was not to reach the executioners.