For numbers "constructible" in the sense of set theory, see Constructible universe. 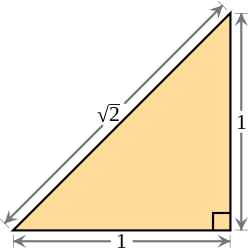 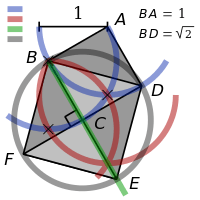 For example, the square root of 2 is constructible: from the length unit, we can construct a line segment of length √2 with straightedge and compass.

In terms of algebra, a number is constructible if and only if it can be written using the four basic arithmetic operations and the extraction of square roots but of no higher-order roots. The set of constructible numbers can be completely characterized in the language of field theory: the constructible numbers form the quadratic closure of the rational numbers: the smallest field extension that is closed under square root and complex conjugation. This has the effect of transforming geometric questions about compass and straightedge constructions into algebra. This transformation leads to the solutions of many famous mathematical problems, which defied centuries of attack.

The geometric definition of a constructible point is as follows. First, for any two distinct points P and Q in the plane, let L(P, Q ) denote the unique line through P and Q, and let C (P, Q ) denote the unique circle with center P, passing through Q. (Note that the order of P and Q matters for the circle.) By convention, L(P, P ) = C (P, P ) = {P }. Then a point Z is constructible from E, F, G and H if either

Now, let A and A′ be any two distinct fixed points in the plane. A point Z is constructible if either

For example, the center point of A and A′ is defined as follows. The circles C (A, A′) and C (A′, A) intersect in two distinct points; these points determine a unique line, and the center is defined to be the intersection of this line with L(A, A′).

Furthermore, K is closed under square roots and complex conjugation. These facts can be used to characterize the field of constructible numbers, because, in essence, the equations defining lines and circles are no worse than quadratic. The characterization is the following: a complex number is constructible if and only if it lies in a field at the top of a finite tower of quadratic extensions, starting with the rational field Q. More precisely, z is constructible if and only if there exists a tower of fields

The algebraic characterization of constructible numbers provides an important necessary condition for constructibility: if z is constructible, then it is algebraic, and its minimal irreducible polynomial has degree a power of 2, or equivalently, the field extension Q(z)/Q has dimension a power of 2. One should note that it is true, (but not obvious to show) that the converse is false — this is not a sufficient condition for constructibility. However, this defect can be remedied by considering the normal closure of Q(z)/Q.

The non-constructibility of certain numbers proves the impossibility of certain problems attempted by the philosophers of ancient Greece. In the following chart, each row represents a specific ancient construction problem. The left column gives the name of the problem. The second column gives an equivalent algebraic formulation of the problem. In other words, the solution to the problem is affirmative if and only if each number in the given set of numbers is constructible. Finally, the last column provides the simplest known counterexample. In other words, the number in the last column is an element of the set in the same row, but is not constructible.