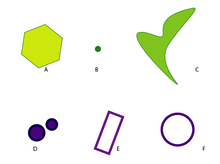 In mathematics, a topological space X is contractible if the identity map on X is null-homotopic, i.e. if it is homotopic to some constant map.[1][2] Intuitively, a contractible space is one that can be continuously shrunk to a point within that space.

The cone on a space X is always contractible. Therefore any space can be embedded in a contractible one (which also illustrates that subspaces of contractible spaces need not be contractible).

Furthermore, X is contractible if and only if there exists a retraction from the cone of X to X.