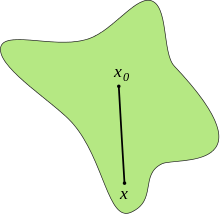 A star domain (equivalently, a star-convex or star-shaped set) is not necessarily convex in the ordinary sense. 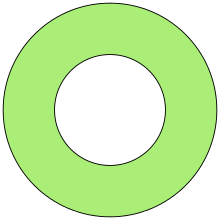 An annulus is not a star domain.

In mathematics, a set S in the Euclidean space Rn is called a star domain (or star-convex set, star-shaped set or radially convex set) if there exists an x0 in S such that for all x in S the line segment from x0 to x is in S. This definition is immediately generalizable to any real or complex vector space.

Intuitively, if one thinks of S as of a region surrounded by a wall, S is a star domain if one can find a vantage point x0 in S from which any point x in S is within line-of-sight.