"Reme" redirects here. For the village in Azerbaijan, see Rəmə.

The Corps of Royal Electrical and Mechanical Engineers (REME; pronounced phonetically as "Reemee" with stress on the first syllable) is a corps of the British Army that maintains the equipment that the British Army utilises.

Prior to REME's formation, maintenance was the responsibility of several different corps:

World War II's increase in quantity and complexity of equipment exposed the flaws in this system. Pursuant to the recommendation of a committee William Beveridge chaired, the Corps of Royal Electrical and Mechanical Engineers was formed on the 1st October 1942.[1]

Such a major re-organisation was too complex to be carried out quickly and completely in the middle of a world war. Therefore the changeover was undertaken in two phases. In Phase I, which was implemented immediately, REME was formed on the existing framework of the RAOC Engineering Branch, strengthened by the transfer of certain technical units and tradesmen from the RE and RASC.

At the same time a number of individual tradesmen were transferred into REME from other corps. The new corps was made responsible for repairing the technical equipment of all arms with certain major exceptions.

REME did not yet undertake:

In 1949, it was decided that "REME Phase II" should be implemented. This decision was published in Army Council Instruction 110 of 1949, and the necessary reorganisation was carried out in the various arms and services in three stages between July 1951 and January 1952. The main changes were:

This organisation was also responsible for arranging and overseeing ship refits.[2] 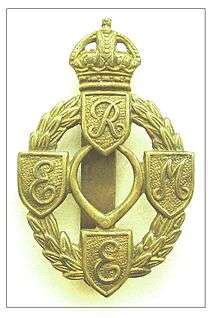 After some interim designs, the badge of the Corps was formalised in June 1943 for use as the cap-badge, collar-badge, and on the buttons. It consisted of an oval Royally Crowned laurel wreath; on the wreath were four small shields at the compass points, each shield bearing one of the letters of "REME".[3] Within the wreath was a pair of calipers.[4] Examples of these early badges can be found at the REME Museum. In 1947 the Horse and Lightning was adopted as the cap badge.[5] The final change occurred in 1953 when the Queen's crown replaced the King's crown.

At the end of the war, the Allies occupied the major German industrial centres to decide their fate. The Volkswagen factory at Wolfsburg became part of the British Zone in June 1945 and No. 30 Workshop Control Unit, REME, assumed control in July. They operated under the overall direction of Colonel Michael McEvoy at Rhine Army Headquarters, Bad Oeynhausen. Uniquely, he had experience of the KdF Wagen in his pre-war career as a motor racing engineer.

Whilst attending the Berlin Motor Show in 1939 he was able to test drive one. After visiting the Volkswagen factory he had the idea of trying to get Volkswagen back into production to provide light transport for the occupying forces. The British Army, Red Cross and essential German services were chronically short of light vehicles. If the factory could provide them, there would be no cost to the British taxpayer and the factory could be saved. To do this a good manager with technical experience would be needed.

Maj. Ivan Hirst was told simply to “take charge of” the Volkswagen plant before arriving in August 1945. He had drains fixed and bomb craters filled in; land in front of the factory was given over to food production.

At first, the wartime Kubelwagen was viewed as a suitable vehicle. Once it became clear it could not be put back into production, the Volkswagen saloon or Kaefer (Beetle) was suggested.

Hirst had an example delivered to Rhine Army headquarters where it was demonstrated by Colonel McEvoy. The positive reaction led to the Military Government placing an order for 20,000 Volkswagens in September 1945.[6]

The Defence School of Electronic and Mechanical Engineering at MoD Lyneham meets most of the training needs of the corps.[7] 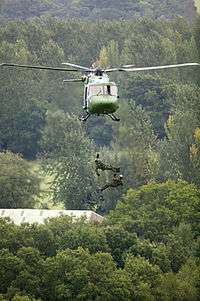 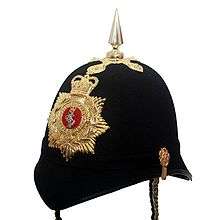 With minor exceptions only, the Corps is now responsible for the examination, modification, repair and recovery of all mechanical, electronic, electrical and optical equipment of the Army beyond the capacity of unit non-technical personnel. REME has its Regimental Headquarters collocated with 8 Training Battalion REME based in MOD Lyneham, in Wiltshire. All trade training and Artificer training of Electro/Mechanical trades of REME and various related training to other units within the British Army and the Navy and Air Force is conducted by 8 Training Battalion REME.

In line with the Army 2020 review there are a total of seven Regular, two Training and six Army Reserve battalions within REME.

List of Directors of Electrical and Mechanical Engineering/Master General REME

The head of REME was officially known as Director of Electrical and Mechanical Engineering (Army) or DEME(A).

In 2012 a new post of Master General REME was created to head the Corps of which Lt Gen Figgures became the first incumbent.