The RAMC does not carry a Regimental Colour or Queen's Colour, although it has a Regimental Flag; nor does it have battle honours, as elements of the Corps have been present in almost every war the army has fought. Because it is not a fighting arm (i.e. it is non-combatant), under the Geneva Conventions, members of the RAMC may only use their weapons for self-defence. For this reason, there are two traditions that the RAMC perform when on parade:

The RAMC, like every other British regiment, has its own distinctive unit insignia. 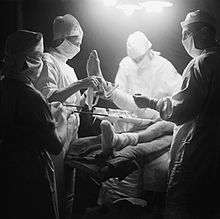 Army surgeons carry out an operation during the Second World War

Medical services in the British armed services go as far back as the formation of the Standing Regular Army after the Restoration of Charles II in 1660. This was the first time a career was provided for a Medical Officer (MO), known as the Regimental Surgeon, both in peacetime and in war. The Army was formed entirely on a regimental basis, and an MO with a Warrant Officer as his Assistant Surgeon was appointed to each regiment, which also provided a hospital. The MO was also for the first time concerned in the continuing health of his troops, and not limited to just battlefield medicine.

This regimental basis of appointment for MOs continued until 1873, when a co-ordinated army medical service was set up. To join, a doctor needed to be qualified and single and aged at least 21, and then undergo a further examination in physiology, surgery, medicine, zoology, botany and physical geography including meteorology, and also to satisfy various other requirements (including having dissected the whole body at least once and having attended 12 midwifery cases); the results were published in three classes by an Army Medical School, which was set up in 1860 at Fort Pitt in Chatham,[1] and moved in 1863 to Netley outside Southampton.[2]

There was much unhappiness in the Army Medical Service in the following years. For medical officers did not actually have military rank but "advantages corresponding to relative military rank" (such as choice of quarters, rates of lodging money, servants, fuel and light, allowances on account of injuries received in action, and pensions and allowances to widows and families). They had inferior pay in India, excessive amounts of Indian and colonial service (being required to serve in India six years at a stretch), and less recognition in honours and awards. They did not have their own identity as did the Army Service Corps, whose officers did have military rank. A number of complaints were published, and the British Medical Journal campaigned loudly. For over two years after 27 July 1887 there were no recruits to the Army Medical Department. A parliamentary committee reported in 1890 highlighting the doctors' injustices. Yet all this was ignored by the Secretary of State for War. The British Medical Association, the Royal College of Physicians and others redoubled their protests.[3] Eventually, in 1898, officers and soldiers providing medical services were incorporated into a new body known by its present name, the Royal Army Medical Corps; its first Colonel-in-Chief was H.R.H. the Duke of Connaught.

The RAMC Memorial for the Boer War at Aldershot in Hampshire

The RAMC began to develop during the Boer War of 1899–1902. The Corps itself lost 743 officers and 6130 soldiers in the war. However, far more of them, and thousands more of the sick and wounded they treated, would have died if it had not been for the civilian doctors working in South Africa as volunteers—such as Sir Frederick Treves, Sir George Makins, Sir Howard Henry Tooth and Professor Alexander Ogston—who, having seen how unprepared to deal with epidemics the RAMC and the Army itself were, decided that a radical reform was needed. Chief among them was Alfred Fripp, who had been chosen by the Imperial Yeomanry Hospital Committee to order all the necessary materials and medical personnel, and oversee the setting-up of a private hospital at Deelfontein to cater, initially, for 520 'sick and wounded.' The contrast between the smooth working of the IYH at Deelfontein with the chaos of the RAMC hospitals, where an enteric epidemic had overwhelmed the staff, led to questions in Parliament, mainly by William Burdett-Coutts. In July 1901 the first meeting of the Committee of Reform took place, with all the aforementioned civilian experts, plus Sir Edwin Cooper Perry, making up half the number; the rest were Army men, and included Alfred Keogh, whom the new Secretary of State for War, Lord Midleton, appointed Chairman of this Committee and the subsequent Advisory Committee. Neither would have met so soon—if at all—but for Fripp's concern to limit unnecessary suffering, and for his ten years' friendship with the new King, Edward VII. Fripp showed him his plans for reform and the King made sure that they were not shelved by his Government. Part of his plan was to move the Netley Hospital and Medical School to a Thames-side site at Millbank, London. Cooper Perry, Fripp's colleague from Guy's Hospital, was instrumental in making this happen, as well as using his formidable talents as an organizer in other services for the Reform Committee. Fripp and Cooper Perry were knighted for their services to the RAMC Committee of Reform in 1903. Fripp was thirty-seven. 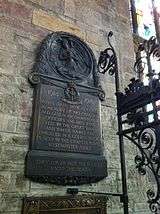 During the First World War, the corps reached its apogee both in size and experience. The two people in charge of the RAMC in the Great War were Arthur Sloggett, the senior RAMC officer seconded to the IYH in Deelfontein who acquiesced in all Fripp's surprising innovations, and Alfred Keogh, whom Fripp recommended to Brodrick as an RAMC man well-regarded when Registrar of No.3 General Hospital in Cape Town. Fripp, Ogston and Perry wrote a joint critical statement about the RAMC's operational shortcomings in 1916 but, given the scale of medical requirements in this War, it was felt that the RAMC had done a fine job in the end.

During Britain's colonial days, the RAMC set up clinics and hospitals in countries wherever British troops could be found. Major-General Sir William Macpherson of the RAMC wrote the official Medical History of the War (HMSO 1922). Its main base was for long the Queen Alexandra Hospital at Millbank, London (now closed).

Before the Second World War, RAMC recruits were required to be at least 5 feet 2 inches tall and could enlist up to 30 years of age. They initially enlisted for seven years with the colours and a further five years with the reserve, or three years and nine years. They trained for six months at the RAMC Depot, Crookham Camp, Aldershot, before proceeding to specialist trade training.[4]

The military medical services are now a tri-service body, with the hospital facilities of Army, Royal Air Force and Royal Navy combined. The main hospital facility is now the Royal Centre for Defence Medicine at Queen Elizabeth Hospital Birmingham, a joint military-National Health Service centre. The former Royal Naval Hospital Haslar in Gosport became the tri-service Royal Hospital Haslar until it was decommissioned in March 2007. The majority of injured service personnel were treated in Selly Oak Hospital, Birmingham prior to the new Queen Elizabeth Hospital's opening. Negative press coverage during the surge of UK military commitments in the years following the second invasion of Iraq[5] has largely given way to an appreciation that the care provided to injured troops has significantly improved.[6][7]

Queen Alexandra Hospital in Portsmouth, Derriford Hospital in Plymouth, Friarage Hospital in Northallerton (near Catterick Garrison) and Frimley Park Hospital (near Aldershot Garrison) also have military hospital units attached to them but they do not treat operational casualties.

The Medical Corps provided non-emergency ambulatory assistance to the Hong Kong Fire Services prior to 1953.

One officer was awarded the George Cross in the Second World War. A young member of the corps, Private Michelle Norris, became the first woman to be awarded the Military Cross following her actions in Iraq on 11 June 2006.[11]

One VC is in existence that is not counted in any official records. In 1856, Queen Victoria laid a Victoria Cross beneath the foundation stone of the Royal Victoria Military Hospital, Netley.[12] When the hospital was demolished in 1966, the VC, known as "The Netley VC", was retrieved and is now on display in the Army Medical Services Museum, Ash Vale, near Aldershot.[12]

Although not serving with the RAMC, Irish born Surgeon John Crimmin VC, CB, CIE, VD is another military medic to win the country's highest award for gallantry. He won his medal in 1889 while serving with The Bombay Medical Service of The Indian Army in the Karen Ni Expedition. John Crimmin is buried in Wells, Somerset. Contrary to other sources the medal is not held by The Army Medical Services Museum.

Trades/careers in the 21st century

Within the military, Medical officers could occupy a number of roles that were dependent on experience, rank and location. Within military documentation, numerous abbreviations were used to identify these roles, of which the following are some of the most common:[13]

Since 1903, the corps has published an academic journal titled the Journal of the Royal Army Medical Corps (JRAMC). Its stated aim is to "publish high quality research, reviews and case reports, as well as other invited articles, which pertain to the practice of military medicine in its broadest sense".[14] Submissions are accepted from serving members of all ranks, as well as academics from outside the military. Initially a monthly publication, it is currently published quarterly by BMJ on behalf of the RAMC Association.[14][15]