The formation of the Royal Tank Regiment followed the invention of the tank. Tanks were first used at the Battle of Flers–Courcelette in September 1916 during the Battle of the Somme in the First World War.[2] At that time the six tank companies were grouped as the Heavy Section of the Machine Gun Corps (MGC). In November 1916 the eight companies then in existence were each expanded to form battalions (still identified by the letters A to H) and designated the Heavy Branch MGC; another seven battalions, I to O, were formed by January 1918, when all the battalion were changed to numbered units. On 28 July 1917 the Heavy Branch was separated from the rest of the Corps by Royal Warrant and given official status as the Tank Corps.[3] The formation of new battalions continued and by December 1918, 26 had been created though there were only 25 battalions equipped with tanks, as the 17th had converted to armoured cars in April 1918. The first commander of the Tank Corps was Hugh Elles. The Corps saw much action at the Battle of Cambrai in November 1917.[3]

After the war, the Tank Corps was trimmed down to a central depot and four battalions: the 2nd, 3rd, 4th and 5th battalions.[4] On 18 October 1923,[5] it was officially given the title Royal making it the Royal Tank Corps (RTC) by Colonel-in-Chief King George V. It was at this time that the motto, "Fear Naught", the black beret, and the unit badge were adopted.[4] In 1933, the 6th Battalion, RTC was formed in Egypt by combining the personnel of the 3rd and 5th Regular Army Armoured Car Companies. In 1934, the 1st (Light) Battalion, RTC was formed in England with personnel drawn from the 2nd, 3rd & 5th Battalions.[4] With the preparations for war in the late 1930s, two more Regular Army Battalions were formed: the 7th in 1937 and the 8th in 1938. In the latter half of 1938, six TA Infantry Battalions were converted to Tank Battalions; with a further six created in 1939 following the "duplication" of the TA.[4]

During the early 1920s, the Tank Corps was augmented by 20 Armoured Car Companies: twelve Regular Army, created using MGC elements; and eight Territorial Army (TA) created by the reduction and conversion of Yeomanry Regiments. Eight of the Regular Army Companies were later converted into independent Light Tank Companies; all twelve Companies had been disbanded by the outbreak of the Second World War. Men of the Royal Tank Regiment in North Africa, 1941. 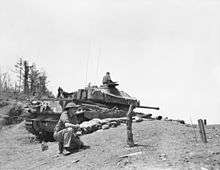 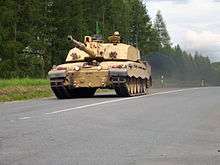 The 2nd Royal Tank Regiment with the Challenger 2 MBT during live-fire training exercises in Germany in 2004.

At the outbreak of war, the regiment consisted of 20 battalions, 8 regular and 12 territorial.

During the course of the war, four "hostilities-only" battalions were formed: the 9th, 10th, 11th and 12th. 11 RTR formed part of 79th Armoured Division (a specialist group operating vehicles known as "Hobart's Funnies"), initially equipped with "Canal Defence Light" tanks, it converted to "Buffalo" (the British service name for the US Landing Vehicle Tracked) not long after D-Day and participated in the assault crossing of the Rhine. Prime Minister Winston Churchill was ferried across the Rhine in a Buffalo from 'C' Squadron, 11RTR.[13]

The Regiment's numerous units took part in countless battles in the Second World War, including the Battle of Dunkirk, El Alamein, Italian Campaign, Burma Campaign and D-Day landings of 6 June 1944. Field Marshal Sir Bernard Law Montgomery would frequently wear the regiment's beret, with his Field Marshal's badge sewn on next to the regimental cap badge, as it was more practical whilst travelling on a tank than either a formal peaked hat or the Australian slouch hat he previously wore.[14]

After service in the Korean War, the RTR was reduced through various amalgamations, firstly, in 1959-60:[15]

The regiment is equipped with Challenger 2 tanks and based at Tidworth and slated to be part of the Reaction Force, coming under 1st Armoured Infantry Brigade.[16][17] Unlike the other Type 56 Challenger 2 Regiments, the RTR has an integrated CBRN reconnaissance squadron operating the Fuchs reconnaissance vehicle. Following amalgamation, the regiment comprises six squadrons:[18] 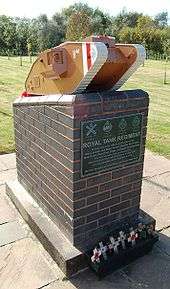 The battle honours are:[19]

The official regimental motto is Fear Naught. The regimental colours are Brown, Red and Green. When it was first formed, the Tank Corps had no distinctive colours. Nothing was done about it until just before the Battle of Cambrai in 1917 when General Elles, wanting some distinguishing mark for his tank, went into a shop to buy material for a flag. Although stocks were small, the General bought some lengths of silk-brown, red and green. The silk was sewn together and was flown from his tank 'Hilda' in which he led the Tank Corps into battle. The colours typified the struggle of the Corps - 'From mud, through blood to the green fields beyond'. This most apt interpretation of the colours was suggested by Colonel Fuller. The flag is flown with the green uppermost.

The Uniform of the Royal Tank Regiment is unique in many ways to the rest of the Royal Armoured Corps and British Army:

Much of the uniform and equipment of soldiers during the First World War was quite impractical for use inside a tank. In particular, the vision apertures in a tank were so small that it was necessary to keep the eyes very close to them in order to get even a limited vision. Thus, any headdress with a peak was entirely unsuitable. In May 1918, General Elles and Colonel Fuller were discussing the future of the Tank Corps and its uniform and General Elles tried on a beret of the 70th Chasseurs Alpins who were billeted nearby. A black beret was selected as it would not show oil stains. No change in uniform was possible during the war, but after a prolonged argument with the War Office, the black beret was approved by King George V on 5 March 1924. The black beret remained the exclusive headdress of the Royal Tank Corps until its practical value was recognised by others and its use extended to the majority of the Royal Armoured Corps in 1940. On the introduction of the blue beret in 1949, the Royal Tank Regiment reclaimed its right to the exclusive use of the black beret, which may not be worn by any other Regiment or Corps with the exception of the Berkshire and Westminster Dragoons Squadrons of The Royal Yeomanry.[22]

The sleeve badge of a First World War Mk 1 tank preceded the formation of the Royal Tank Corps when it was worn by the Heavy Branch of the Machine Gun Corps.[23] Authorised on 7 May 1917, it is still worn today.[24]

During the First World War, walking sticks were often carried by officers. Such sticks came to have a new and more important use with the introduction of tanks which often became 'bogged' on battlefields, particularly in Flanders. Officers of the Tank Corps used these sticks to probe the ground in front of their tanks testing for firmness as they went forward. Often the commanders led their tanks into action on foot. To commemorate this, officers of the Regiment carry ash plant sticks instead of the short cane customary to other arms.[22]

The wearing of black overalls is a custom reserved to the Regiment by Material Regulations for the Army, volume 3, Pamphlet No 4 (Code 13251). It stems from the Royal Review held at Aldershot in the presence of King George V on 13 July 1935 on which occasion black overalls were worn on parade by all ranks of the Royal Tanks Corps. The practice lapsed during the Second World War, but was re-introduced in the 1950s.[22]