Courier is a monospaced slab serif typeface designed to resemble the output from a strike-on typewriter. The typeface was designed by Howard "Bud" Kettler in 1955, and it was later redrawn by Adrian Frutiger for the IBM Selectric Composer series of electric typewriters.

Although the design of the original Courier typeface was commissioned by IBM, the company deliberately chose not to secure legal exclusivity to the typeface and it soon became a standard font used throughout the typewriter industry. Because IBM deliberately chose not to seek any copyright, trademark, or design patent protection, the Courier typeface cannot be trademarked or copyrighted and is completely royalty free.

As a monospaced font, in the 1990s, it found renewed use in the electronic world in situations where columns of characters must be consistently aligned. It has also become an industry standard for all screenplays to be written in 12-point Courier or a close variant. 12-point Courier New was also the U.S. State Department's standard typeface until January 2004, when it was replaced with 14-point Times New Roman. Reasons for the change included the desire for a more "modern" and "legible" font.[1][2][3]

Kettler was once quoted about how the name was chosen. The font was nearly released with the name "Messenger." After giving it some thought, Kettler said, "A letter can be just an ordinary messenger, or it can be the courier, which radiates dignity, prestige, and stability."[2] 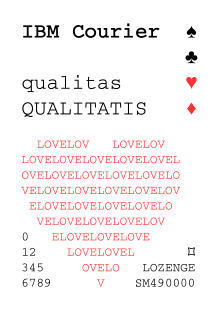 Sample of the original IBM Courier

"Courier New" is a version produced by Monotype. Courier New was "digitized directly from the golf ball of the IBM Selectric"; this process resulted in some very thin outlines, because the typewriter's ball was designed deliberately thinner than the intended character stroke width since these expand as ink soaks into the paper.[5] It is unpopular and many programmers recommend avoiding it: programmer and blogger John Gruber described it as "a wretched variant of Courier; anemic and spindly."[6]

Courier New was introduced with Windows 3.1, which also included raster Courier fonts. The fonts were also sold commercially by Ascender Corporation. The Ascender fonts have 'WGL' at the end of the font name, and cover only the WGL characters.

Courier New is used as the default font for monospace/modern generic font family in MS Windows (since Windows 3.1). It is commonly used as the font for plain text email messages. Version 2.76 or later includes Hebrew and Arabic glyphs, with most of Arabic added on non-italic fonts. The styling of Arabic glyphs is similar to those found in Times New Roman, but is adjusted to be monospaced. Courier New has been updated to version 5.00, which includes over 3100 glyphs, covering over 2700 characters per font.

Because the outlines of Courier New were so thin, a special hack was added for them in ClearType, thickening them in order to make them readable using the new rendering technology.[5]

Dark Courier is a TrueType font from HP that is distributed freely (in the form of a Microsoft Windows-only installer, though the font will work on other systems), for those who feel the appearance of Courier New is too thin. 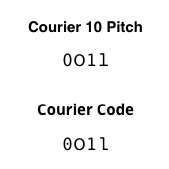 Comparison of the typefaces Courier 10 Pitch and Courier Code. From left to right the characters are: zero, capital O, one, lowercase L.

This is Bitstream's version of the classic typeface, available in Type 1 format. It has been donated to the X Consortium by Bitstream (along with Bitstream Charter) and is thus freely available. It is the default Courier font on most Linux distributions.

Courier Prime matches the metrics of Courier and Courier Final Draft, with some design changes and improvements aimed at greater legibility and beauty. It was designed by Alan Dague-Greene with funding from John August, and released in January 2013 under the SIL Open Font License.[8] The family was extended with sans-serif and code versions in 2016.

URW++ produced a version of Courier called Nimbus Mono L in 1984, and eventually released under the GPL and AFPL (as Type 1 font for Ghostscript) in 1996.[9][10][11] It is one of the Ghostscript fonts, a free alternatives to 35 basic PostScript fonts (which include Courier). It is available in major free and open source operating systems.

Courier is commonly used in ASCII art because it is a monospaced font and is available almost universally. "Solid-style" ASCII art uses the darkness/lightness of each character to portray an object, which can be quantified in pixels (here in pt. 12):

Courier, as a common monospaced font, is often used to signify source code.[16]