For the Arabic script as used to write the Arabic language, see Arabic alphabet.

The Arabic script is a writing system used for writing several languages of Asia and Africa, such as Arabic, dialects of Mandinka, Central Kurdish, Luri, Persian, Urdu, Pashto, and others.[1] Until the 16th century, it was even used to write some texts in Spanish.[2] It is the second-most widely used writing system in the world by the number of countries using it and the third by the number of users, after Latin and Chinese characters.[3]

The Arabic script is written from right to left in a cursive style. In most cases the letters transcribe consonants, or consonants and a few vowels, so most Arabic alphabets are abjads.

The script was first used to write texts in Arabic, most notably the Qurʼān, the holy book of Islam. With the spread of Islam, it came to be used to write languages of many language families, leading to the addition of new letters and other symbols, with some versions, such as Kurdish, Uyghur, and old Bosnian being abugidas or true alphabets. It is also the basis for the tradition of Arabic calligraphy.

Languages written with the Arabic script 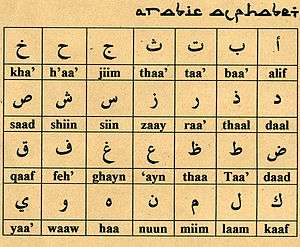 The Arabic script has been adopted for use in a wide variety of languages besides Arabic, including Persian, Malay and Urdu which are not Semitic. Such adaptations may feature altered or new characters to represent phonemes that do not appear in Arabic phonology. For example, the Arabic language lacks a voiceless bilabial plosive (the [p] sound), so many languages add their own letter to represent [p] in the script, though the specific letter used varies from language to language. These modifications tend to fall into groups: all the Indian and Turkic languages written in the Arabic script tend to use the Persian modified letters, whereas the languages of Indonesia tend to imitate those of Jawi. The modified version of the Arabic script originally devised for use with Persian is known as the Perso-Arabic script by scholars.

In the cases of Bosnian, Kurdish, Kashmiri, and Uyghur writing systems, vowels are mandatory. The Arabic script can therefore be used in both abugida and abjad, although it is often strongly, erroneously connected to the latter.

Use of the Arabic script in West African languages, especially in the Sahel, developed with the spread of Islam. To a certain degree the style and usage tends to follow those of the Maghreb (for instance the position of the dots in the letters fāʼ and qāf). Additional diacritics have come into use to facilitate writing of sounds not represented in the Arabic language. The term ʻAjamī, which comes from the Arabic root for "foreign," has been applied to Arabic-based orthographies of African languages.

An Arabic alphabet is currently used for the following languages:

Speakers of languages that were previously unwritten used Arabic script as a basis to design writing systems for their mother languages. This choice could be influenced by Arabic being their second language, the language of scripture of their faith, or the only written language they came in contact with. Additionally, since most education was once religious, choice of script was determined by the writer's religion; which meant that Muslims would use Arabic script to write whatever language they spoke. This led to Arabic script being the most widely used script during the Middle Ages.

In the 20th century, the Arabic script was generally replaced by the Latin alphabet in the Balkans, parts of Sub-Saharan Africa, and Southeast Asia, while in the Soviet Union, after a brief period of Latinisation,[32] use of Cyrillic was mandated. Turkey changed to the Latin alphabet in 1928 as part of an internal Westernizing revolution. After the collapse of the Soviet Union in 1991, many of the Turkic languages of the ex-USSR attempted to follow Turkey's lead and convert to a Turkish-style Latin alphabet. However, renewed use of the Arabic alphabet has occurred to a limited extent in Tajikistan, whose language's close resemblance to Persian allows direct use of publications from Iran.[33]

As of Unicode 9.0, the following ranges encode Arabic characters: