Crime films are a genre of film that focus on crime. The stylistic approach to a crime film varies from realistic portrayals of real-life criminal figures, to the far-fetched evil doings of imaginary arch-villains. 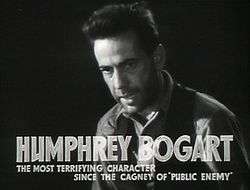 Humphrey Bogart in The Petrified Forest (1936)

Films dealing with crime and its detection are often based on plays rather than novels. Agatha Christie's stage play Witness for the Prosecution (1953; based on her own short story, published in 1933) was adapted for the big screen by director Billy Wilder in 1957. The film starred Marlene Dietrich and Charles Laughton and is a classic example of a "courtroom drama". In a courtroom drama, a charge is brought against one of the main characters, who says that they are innocent. Another major part is played by the lawyer (in England a barrister) representing the defendant in court and battling with the public prosecutor. He or she may enlist the services of a private investigator to find out what really happened and who the real perpetrator is. However, in most cases it is not clear at all whether the accused is guilty of the crime or not—this is how suspense is created.

Often, the private investigator storms into the courtroom at the very last minute in order to bring a new and crucial piece of information to the attention of the court. This type of literature lends itself to the literary genre of drama focused more on dialogue (the opening and closing statements, the witnesses' testimonies, etc.) and little or no necessity for a shift in scenery. The auditorium of the theatre becomes an extension of the courtroom. When a courtroom drama is filmed, the traditional device employed by screenwriters and directors is the frequent use of flashbacks, in which the crime and everything that led up to it is narrated and reconstructed from different angles.

In Witness for the Prosecution, Leonard Vole, a young American living in England, is accused of murdering a middle-aged lady he met in the street while shopping. His wife (played by Marlene Dietrich) hires the best lawyer available (Charles Laughton) because she is convinced, or rather she knows, that her husband is innocent. Another classic courtroom drama is U.S. playwright Reginald Rose's Twelve Angry Men (1954), which is set in the jury deliberation room of a New York Court of Law. Eleven members of the jury, aiming at a unanimous verdict of "guilty", try to get it over with as quickly as possible. And they would really succeed in achieving their common aim if it were not for the eighth juror (played by Henry Fonda in the 1957 movie adaptation), who, on second thoughts, considers it his duty to convince his colleagues that the defendant may be innocent after all, and who, by doing so, triggers a lot of discussion, confusion, and anger.

The popularity of TV brought about the emergence of TV series featuring detectives, investigators, special agents, lawyers, and the police. In Britain, The Avengers (1960s) about the adventures of gentleman agent John Steed and his partner, Emma Peel, achieved cult status. U.S. TV stations produced series such as 77 Sunset Strip (1958–1963); The Streets of San Francisco (1972–1977), starring Karl Malden and a young Michael Douglas; Kojak (1973–1978), with Telly Savalas playing the lollipop-addicted police lieutenant; Switch (1975–1978), with Eddie Albert playing the retired bunco cop to Robert Wagner's role as a former con man; Charlie's Angels (1976–1981); Murder, She Wrote (starting in 1984), about the adventures of Cabot Cove-based mystery writer Jessica Fletcher, played by Angela Lansbury. In Germany, Derrick became a household word. Breaking Bad character Walter White is a methamphetamine drug manufacturer, this offered a different approach whereby the protagonist is the criminal instead of being the detective.

Crime films may fall under several different subgenres. These include: