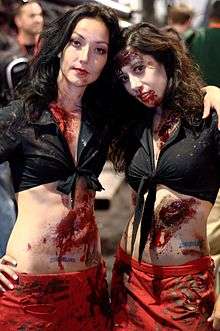 Comedy horror is a literary and film genre that combines elements of comedy and horror fiction. Comedy horror has been described as able to be categorized under three types: "black comedy, parody and spoof."[1] The genre almost inevitably crosses over with the black comedy genre. Comedy horror will often use satire on horror cliches as its main source of humour or take a story in a different perspective, such as The Cabin in the Woods and Tucker & Dale vs. Evil.

Author Bruce G. Hallenbeck cites the short story "The Legend of Sleepy Hollow" by Washington Irving as "the first great comedy horror story".[2] The story made readers "laugh one moment and scream the next", and its premise was based on mischief typically found during the holiday Halloween.[2]

Horror and comedy have been associated with each other since the early days of horror novels. Shortly after the publication of Frankenstein, comedic parodies appeared. Edgar Allan Poe put humor and horror on the same continuum, and many nineteenth century authors used black humor in their horror stories. Contemporary author Robert Bloch called them "opposite sides of the same coin".[3]

In comedy horror film, gallows humor is a common element. While comedy horror films provide scares for audiences, they also provide something that dramatic horror films do not: "the permission to laugh at your fears, to whistle past the cinematic graveyard and feel secure in the knowledge that the monsters can't get you".[2]

In the era of silent film, the source material for early comedy horror films came from stage performances instead of literature. One example, The Ghost Breaker (1914), was based on a 1909 play, though the film's horror elements were more interesting to the audience than the comedy elements. In the United States following the trauma of World War I, film audiences sought to see horror on screen but tempered with humor. The "pioneering" comedy horror film was One Exciting Night (1922), written, directed, and produced by D. W. Griffith, who noticed the stage success of the genre and foresaw a cinematic translation. While the film included blackface performances, Griffith also included footage of a hurricane for a climactic storm. As an early experiment, the various genres were not well-balanced with horror and comedy, and later films improved the balance and took more sophisticated approaches.[4] Charles Bramesco of Vulture.com identifies Abbott and Costello Meet Frankenstein as the first commercially successful comedy horror film. Its success legitimized the genre and established it as commercially viable.[5]