The Croatian Navy (Croatian: Hrvatska ratna mornarica) is a branch of the Croatian Armed Forces. It was formed in 1991 from what Croatian forces managed to capture from the Yugoslav Navy during the Breakup of Yugoslavia and Croatian War of Independence. In addition to mobile coastal missile launchers, today it operates 29 vessels, divided into Navy Flotilla for traditional naval duties and the Croatian Coast Guard. Five missile boats form Croatian fleet's main offensive capability.

Since the ninth century, the Duchy of Croatia (later Kingdom) engaged in naval battles, struggling to maintain control over the eastern Adriatic coast and Adriatic merchant routes. Commemorating the first recorded Croat naval victory, when the subjects of Croatian duke Branimir defeated the Venetian naval expedition on September 18, 887, the Croatian Navy Day is celebrated yearly on September 18.[2] Croatian fleet was particularly active under duke Domagoj and king Petar Krešimir IV. Royal Croatian-Dalmatian navy with 12-15 galleys existed under Louis I in central Dalmatia in the 14th century. Afterwards Venetian Republic established control over most of Croatian coast until 1797. Modern foundations of Croatian Navy can be traced back to Austro-Hungarian Navy (1797-1918) and Yugoslav Navy (1918-1941, 1942-1991) when Croatia was a constituent part of these states. 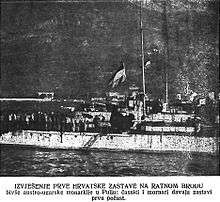 First Croatian flag ever hoisted on a naval ship, Pula, October 31st, 1918, with the crews saluting the flag.

When Croatia was a part of Austria-Hungary, its Adriatic coast was essentially the only access to sea this Central European state had. A Habsburg arsenal and a naval shipyard were established in Kraljevica in 1729, while naval bases, schools, shipyards, headquarters and a naval academy were later set up in Pula and Rijeka. Navy's emblem included Croatian coat of arms. Many highly ranked officers came from Croatia: grand admiral Maximilian Njegovan, ship-of-the-line captain Janko Vuković Podkapelski and others. In 1885, 44.9% of sailors and NCOs and 10.3% of naval officers were ethnically Croatian,[Note] while in 1910 those shares dropped to 29.8% and 9.8%, respectively.[3] At the end of October 1918, while Austria-Hungary was falling apart and the war was drawing to an end, emperor Charles handed the Navy over to the Zagreb People's Council, which promoted Vuković to the rank of the rear admiral and appointed him as a fleet commander. Croatian flag was hoisted on all ships in Pula (including, most notably, the flagship SMS Viribus Unitis) and some in Kotor, but the Entente navies soon captured nearly all vessels and divided them among themselves.

Croatian officers and sailors continued to man the new Royal Yugoslav Navy (1918-1941) until its demise during the Axis invasion of Yugoslavia. During World War II Croatian partisans formed a guerilla Partisan Navy consisting of makeshift vessels in 1942, resisting Italian (and later German) occupation of the Adriatic. In the later phases of the war, they cooperated closely with the Royal Navy. After the war, Socialist Yugoslav Navy, sprung up from the partisan navy, had Split as its HQ and mainly used shipyards in Šibenik, Split, Kraljevica, Rijeka and Pula. 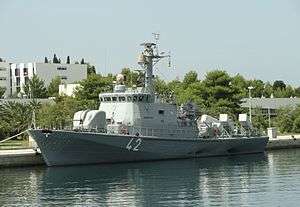 In 2004 Croatia joined the NATO and the Navy was restructured in the process. In addition to that, in 2007 it was reorganized by dividing the personnel and vessels with newly founded Coast Guard, which remained a part of the Navy. Two former Helsinki class missile boats, FNS Oulu and FNS Kotka, were acquired from Finland. They were renamed Vukovar and Dubrovnik respectively, and entered service in December, 2008. They were acquired along with a considerable amount of spare parts (most notably three MTU engines - to be installed on Kralj class vessels) due to a severe shortage of vessels at present. The price of these ships was €9 million and is considered rather symbolic, mostly because it was a part of the offset deal for the previous Croatian acquisition of Patria AMV armoured vehicles. The ships reached their full operational capability in June, 2009. The 2015 Strategic Defence Review envisages an overhaul and upgrade suitable for 'interception duties' to be completed in 2020. A revised out-of-service date is not known.

The Končar class missile boat Šibenik has been overhauled with new turbine engines and radars and is due to remain in service until 2018-2020. The Kralj class vessels were planned to be extensively modernized at a price of €20 million, but as a result of the recent acquisition of Helsinki class boats RTOP-11 has completed a basic overhaul and engine upgrade worth around €5 million. RTOP-12 will also be upgraded to this standard.

The RBS-15 missile system was due to be scrapped but this decision was reversed in 2014 and an upgrade to 20 units will be completed by 2018. Successful live firing of the upgraded missiles was conducted from a mobile launcher and from RTOP-12 during 2015 (the first missile firing exercise by the Croatian Navy since 1994)[4] and again from RTOP-42 during 2016.[5] 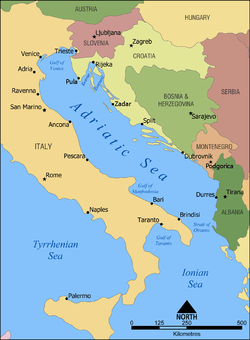 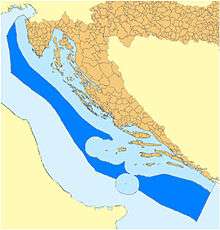 The following commands were created to carry out the mission of the Croatian Navy:[6]

Navy Command in Split was reshuffled into Navy Staff in 2013.[7] Navy Staff is led by a Ship-of-the-Line Captain, who apart from being the chief of Navy Staff also serves as a deputy commander of the Navy. This position is currently held by SotL Capt. Milan Blažević. A Command company is attached to the Navy Staff. 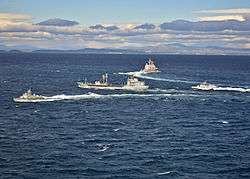 Navy flotilla handles all tasks regarding anti-ship and anti-submarine warfare as well as minelaying and mine countermeasures, anti-terrorist activities and VIP/residential transport. Flotilla is administratively based in Lora naval base in Split. Current commander is ship-of-the-line captain Damir Dojkić.[8] Today it is accordingly divided into three squadrons: 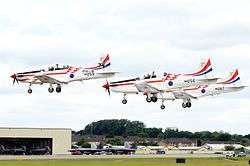 Four Air Force Mil Mi-8MTV-1 helicopters (based at Divulje airfield near Split) and two Pilatus PC-9 planes (based at Zemunik Air Base) are operationally attached to the Coast Guard for maritime SAR and navy support and maritime patrol duties, respectively.

The Split naval base's task is to manage the Lora Naval Base in northern part of Split, including "St. Nicholas" naval barracks, and to provide logistic support for the ships and vessels in Pula (Naval Detachment North) and Ploče (Naval Detachment South). It also manages Naval Training Center in Split and a medical center specifically designed to treat maritime disease, such as decompression sickness. 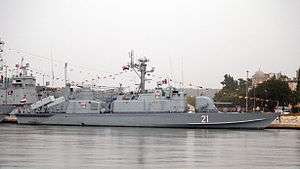 Croatian Navy operates mostly those vessels that were captured from disintegrating Yugoslav Navy during the Croatian War of Independence in 1991. Most of those have been extensively overhauled or modernized (such as Šibenik (RTOP-21), extensively overhauled in 1991 to match the Kralj class), especially after the navy introduced RBS-15B missiles in its service instead of Soviet P-20s that used to be standard Yugoslav equipment. However, out of five missile boats, main combatant vessels, only Šibenik served under Yugoslav flag. Some ships were captured laid or unfinished in the docks and were finished by Croatians (such as Kralj Petar Krešimir IV (RTOP-11) in 1992). Kralj Dmitar Zvonimir (RTOP-12) (commissioned in 2001) as Krešimir's improved design and Cetina-class minelayer-landing ships were built and commissioned in Croatia (1993 and 1995, respectively). Two Helsinki-class missile boats RTOP-41 Vukovar and RTOP-42 Dubrovnik (built in 1985/6) were purchased from Finland in 2008, while a small minehunter LM-51 Korčula was built in 2006.

Krešimir underwent an extensive overhaul and engine replacement in 2014 while Zvonimir, being built during international arms embargo against former Yugoslav countries in the 1990s and thus featuring a mix of Russian and western equipment, also underwent an overhaul in 2015.

Navy also operates several armed landing crafts, while one school ship (BŠ-72 Andrija Mohorovičić) built in 1972 and one salvage ship (BS-73 Faust Vrančić) built in 1976 are a part of the Coast Guard. Croatian forces also operate about 20 other auxiliary vessels and crafts.

Coast Guard's backbone are four Mirna class patrol boats built during the early 1980s. Their radar equipment was modernized in 2007 and stern anti-aircraft guns have been replaced with a hoist with semi-rigid-hulled inflatable boats in 2009-2012 to help in their intercepting duties. These aging patrol boats will be replaced in 2016-9 with 5 OOB-39 project ships currently under construction in Brodosplit shipyard, which is the first major modernization of Croatian Navy in a while. Construction of the first out of the projected 5 vessels was scheduled to start in 2007, however the international tender for the construction of 5 vessels was published only on April 24, 2013. The tender called for the acquisition of a total of 5 inshore patrol boats which are to be 43.5 meters long, with a displacement of roughly 220 tons and a maximum sustained speed of at least 28 knots.[11][12] They will be armed with a 30mm Typhoon Weapon System stabilized remote weapon station and two 12.7mm heavy machine guns along with a MANPADS launcher. The order was placed with Brodosplit in April 2015 and the keel of the first ship was laid in September of the same year. As projected, the first vessel is to enter service in the beginning of 2017, the second and third in 2017, the fourth in 2018 and the last one in 2019. Units are projected to cost around 10 million euros, respectively.[11]

Previously reported plans for the purchase of 2-4 offshore patrol vessels (OPV) or corvettes have been cancelled due to budgetary constraints but the 2015 strategic defence review envisages the procurement of a second-hand OPV by 2024. Politicians and military figures continue to discuss construction of a domestic-build OPVs or surface combatants in the post-2020 time period but this is an unfunded project. Navy commander, rear admiral Stipanović, stated in October 2016 that the introduction of a new missile system (replacing the existing RBS-15) will be planned accordingly and executed together with construction of new OPVs.[13]

Coastal and other equipment

After a distinct Croatian Navy was founded in 1991, naval education went through various reforms and changes. Currently officers to be commissioned into the Croatian Navy receive their undergraduate education at Croatian Military Academy in Zagreb, which also hosts staff colleges and war colleges. A specific naval education and training centre is set up in Lora naval base in Split. Croatian Military Academy and Split University as of 2016 are in the process of opening a new undergraduate 4-year naval program in Split which is to have two main course tracks: naval engineering and seamanship.[14][13]

^ Official Austro-Hungarian statistics at the time counted personnel according to the language, at the time labeled as "Serbocroatian", thus encompassing all Croats and Serbs from the state. The vast majority of such naval personnel came from Adriatic regions of Croatia, where Serbs have been a negligible minority.