The D Sixth Avenue Express is a rapid transit service in the B Division of the New York City Subway. Its route emblem, or "bullet", is colored bright orange since it uses the IND Sixth Avenue Line in Manhattan.[1] The D operates at all times between 205th Street in Norwood, Bronx, and Stillwell Avenue in Coney Island, Brooklyn via Grand Concourse in the Bronx, Central Park West / Sixth Avenue in Manhattan, the north side of the Manhattan Bridge, and Fourth Avenue / West End in Brooklyn. The D runs express in Manhattan and makes all stops on the BMT West End Line in Brooklyn at all times. The D also makes all stops in the Bronx except when it runs express in the peak direction during rush hours. The D runs express on Fourth Avenue at all times except nights when it serves all stops.

A poster showing the temporary DD service that resulted from a water main break. 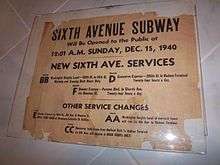 D service was increased on October 24, 1949 in order to offset the loss off CC service.[3]

On December 29, 1951, peak direction express service in the Bronx was discontinued.

On October 30, 1954, a connection between the IND South Brooklyn Line and BMT Culver Line opened. D service was rerouted via these two lines to Coney Island – Stillwell Avenue with limited rush hour trains to Church Avenue.[4]

Between 1957 and 1959, limited rush hour trains ran express and/or local to Euclid Avenue.

From December 4 to December 27, 1962, a special service labeled DD was provided due to a water main break. It ran local from 205th Street, Bronx to 59th Street – Columbus Circle, then continued as a local down the Eighth Avenue Line to West Fourth Street, where it switched to the Sixth Avenue Line and continued on its normal route to Coney Island – Stillwell Avenue via the Culver Line.[5]

On November 26, 1967, the Chrystie Street Connection opened, adding express service on the Sixth Avenue Line and connecting it with the north tracks of the Manhattan Bridge. D service was switched over to BMT Brighton Line via this new connector. It became the express service weekdays to Brighton Beach and the local to Stillwell Avenue at other times. In Manhattan, it ran express from West 4th Street to 34th Street rush hours only (the B used the express tracks to relay when it terminated at West 4th Street at other times).[6] It would become the full-time Sixth Avenue Express when non-rush hours B service was extended to 57th Street – Sixth Avenue.

When the north tracks of the Manhattan Bridge closed on April 13, 1986 due to construction, the D service was divided and ran in two sections, one between Norwood-205th Street in the Bronx and 34th Street – Herald Square (the Orange D) while the other ran from 57th Street – Seventh Avenue on the BMT Broadway Line, then express along the Broadway Line to Canal Street, then over the south tracks of the Manhattan Bridge into Brooklyn, and then along the Brighton Line to Stillwell Avenue (the Yellow D). At this time, D/Q skip-stop service ran in Brooklyn on weekdays.

On December 11, 1988, the north tracks of the Manhattan Bridge reopened and the two sections of the D joined together running via Sixth Avenue Express. The D now ran as the full-time Brighton Local to Stillwell Avenue.[7]

After September 11, 2001, C service was suspended. On weekends, the D ran local on the Eighth Avenue Line north of 59th Street to fill in the gap in service caused by the suspension.

On February 22, 2004, full service on the Manhattan Bridge was restored and D trains were extended via the north tracks of the bridge to Brooklyn, replacing the W as the Fourth Avenue Express (late nights local) and West End Local to Coney Island – Stillwell Avenue.[9][10][11] The D was moved to the West End Line instead of returning to the Brighton Line, which it had run on since 1967, in order to avoid running two separate (B and D) shortened services outside of weekdays. Moving the D to the West End Line meant it could now provide 24-hour service to both the Concourse Line in the Bronx and West End Line in Brooklyn. This eliminated the need to run late-night and/or weekend shuttles on either the West End or Concourse lines.[12]

From May 24, 2004 to Fall 2004, construction on the IND Concourse Line, required the suspension of D express service in the Bronx.[13]

The following table shows the lines used by the D, with shaded boxes indicating the route at the specified times:

For a more detailed station listing, see the articles on the lines listed above.