Sixth Avenue – officially Avenue of the Americas, although this name is seldom used by New Yorkers[2][3][4] – is a major thoroughfare in New York City's borough of Manhattan, on which traffic runs northbound, or "uptown". It is commercial for much of its length.

Sixth Avenue begins four blocks below Canal Street, at Franklin Street in TriBeCa, where the northbound Church Street divides into Sixth Avenue to the left and the local continuation of Church Street to the right, which then ends at Canal Street. From this beginning, Sixth Avenue traverses SoHo and Greenwich Village, roughly divides Chelsea from the Flatiron District and NoMad, passes through the Garment District and skirts the edge of the Theater District while passing through Midtown Manhattan. 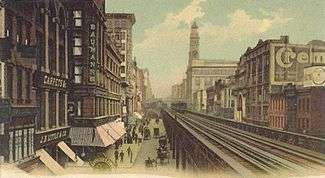 Looking north from 14th Street in 1905, with the Sixth Avenue El on the right 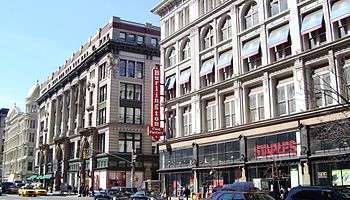 The historic Ladies' Mile shopping district that thrived along Sixth Avenue left behind some of the largest retail spaces in the city. Beginning in the 1990s, the buildings began to be reused after being dormant for decades.

Sixth Avenue was laid out in the Commissioners' Plan of 1811. As originally designed, Sixth Avenue's southern terminus was at Carmine Street in Greenwich Village. In the early and mid 1800s it passed by the popular roadhouse and tavern Old Grapevine at the corner of 11th street, which in the early 1800s was the northern edge of the city.[6] The IRT Sixth Avenue Line elevated railway (the "El") was constructed on Sixth Avenue in 1878, darkening the street and reducing its real-estate value.

Proposals to extend the street south from Carmine Street, to allow easier access to lower Manhattan, were discussed by the city's Board of Aldermen as early as the mid-1860s.[7] The southern extension was carried out in the mid-1920s, to ease traffic in the Holland Tunnel, facilitate construction of the IND Eighth Avenue Line and to connect with Church Street near its northern end, forming a continuous four-lane through-route for traffic from Lower Manhattan. Construction of the extension resulted in considerable dislocation to existing residents. One historian said that "ten thousand people were displaced, most of them Italian immigrants who knew no other home in America".[8] According to the WPA Guide to New York City, the extension resulted in blank side walls facing the "uninspiring thoroughfare" and small leftover spaces.[9] Dozens of buildings, including the original Church of Our Lady of Pompeii, were demolished.

In late 1887, the Harlem portion of what was then considered Sixth Avenue was renamed Lenox Avenue[10] for philanthropist James Lenox; it was later co-named Malcolm X Boulevard, in honor of the slain civil rights leader, a century later.[11][12]

By the mid-20th century, a coalition of commercial establishments and building owners along Sixth Avenue campaigned to have the El removed. The El was closed on December 4, 1938 and came down in stages, beginning in Greenwich Village in 1938–39; the Sixth Avenue subway replaced it a couple of years later.[9]

Demolition of the Sixth Avenue elevated railway, meanwhile, resulted in accelerated commercial development of the avenue in Midtown. Beginning in the 1960s, the avenue was entirely rebuilt above 42nd Street as an all-but-uninterrupted avenue of corporate headquarters housed in glass slab towers of International Modernist style. Among the buildings constructed was the CBS Building at 52nd Street, by Eero Saarinen (1965), dubbed "Black Rock" from its dark granite piers that run from base to crown without a break; this designated landmark is Saarinen's only skyscraper.

On March 10, 1957, Sixth Avenue was reconfigured to carry one-way traffic north of its intersection with Broadway in Herald Square.[13] The rest of the avenue followed on November 10, 1963.[14]

In the mid-1970s, the city "spruced up" the street, including the addition of patterned brick crosswalks, repainting of streetlamps, and new pedestrian plazas. Special lighting, rare throughout the rest of the city, was also installed.[15] 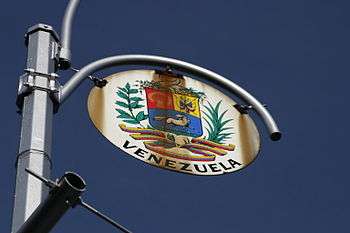 The avenue's official name was changed to Avenue of the Americas in 1945 by the City Council, at the behest of Mayor Fiorello La Guardia,[16] who signed the bill into law on October 2, 1945.[17] The intent was to honor "Pan-American ideals and principles"[18] and the nations of Central and South America, and to encourage those countries to build consulates along the avenue.[19] It was felt at the time that the name would provide greater grandeur to a shabby street,[20] and to promote trade with the Western Hemisphere.[21]

After the name change, round signs were attached to streetlights on the avenue, showing the national seals of the nations honored. However, New Yorkers seldom used the avenue's newer name,[4] and the street has been labelled as both "Avenue of the Americas" and "Sixth Avenue" in recent years. Most of the old round signs with country emblems were gone by the late 1990s, and the ones remaining were showing signs of age.[21] 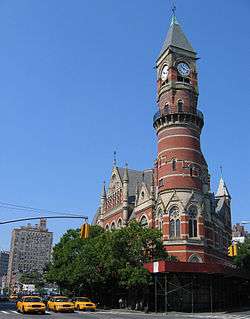 Sights along Sixth Avenue include Juan Pablo Duarte Square;[22] with the polychrome High Victorian Gothic Jefferson Market Courthouse, currently occupied by the Jefferson Market Library;[23] the surviving stretch of grand department stores of 1880 to 1900 in the Ladies' Mile Historic District that runs from 18th Street to 23rd Street;[24] the former wholesale flower district; Herald Square at 34th Street,[25] site of Macy's department store;[26] Bryant Park from 40th to 42nd Streets;[27] and the corporate stretch above 42nd Street, which includes the Bank of America Tower, W. R. Grace Building, International Center of Photography, Rockefeller Center — including the Time-Life Building, News Corp. Building, Exxon Building and McGraw-Hill Building, as well as Radio City Music Hall. The Steinway Hall of New York was moved to 1130 Sixth Avenue in October 2014.[28] A new Steinway Hall is planned to open on 1155 Sixth Avenue in 2015.[29]

Sixth Avenue is the site of the annual Village Halloween Parade in Greenwich Village[30] and the Dominican Day Parade in Midtown.

The avenue is referenced both in the name and in the lyrics of "6th Avenue Heartache" by The Wallflowers.[31]