For other uses, see Daikon (disambiguation).

Daikon (大根, literally "big root"), also known by many other names depending on context, is a mild-flavored winter radish (Raphanus sativus) usually characterized by fast-growing leaves and a long, white, napiform root. Originally native to Southeast or continental East Asia,[8] daikon is harvested and consumed throughout the region (as well as in South Asia).

In culinary contexts, "daikon" or "daikon radish" (from its Japanese name) is the most common in all forms of English, although historical ties to South Asia permit mooli (from its Hindi name and also in Urdu) as a general synonym in British English.[9] The generic terms white radish, winter radish, Oriental radish,[11] long white radish, and other terms are also used. Other synonyms usually vary by region or describe regional varieties of the vegetable. When it is necessary to distinguish the usual Japanese form from others, it is sometimes known as Japanese radish[12] or "true daikon".[13] The vegetable's Mandarin names are still uncommon in English; in most forms of Chinese cuisine, it is usually known as Chinese white radish,[12] although in Cantonese and Malaysian cuisine, it is encountered as lobak or lo pak, which are southern Chinese dialect pronunciations of the general Chinese term for radish (萝卜). In the cuisines of Hokkien-speaking areas such as Singapore, it is also known as chai tow or chai tau, and in South Asia as mooli. In any of these, it may also simply be referred to as "radish", with the regional variety implied by context. In English-speaking countries, it is also sometimes marketed as icicle radish.

In mainland China and Singapore, the calque white carrot or misnomer carrot is sometimes used, owing to the similarity of the vegetables' names in Mandarin and Hokkien. This variant gave the title to a popular guidebook on Singaporean street food, There's No Carrot in Carrot Cake, which refers to chai tow kway, a kind of cake made from daikon.[14]

In North America, it is primarily grown not for food, but as a fallow crop, with the roots left unharvested to prevent soil compaction and the leaves (if harvested) used as animal fodder.[3]

The official general name used by the United States Department of Agriculture is oilseed radish, but this is only used in nonculinary contexts. Other English terms employed when daikon is being used as animal feed or as a soil ripper are forage radish, fodder radish, and tillage radish.[3][15]

The most common variety in Japan (aokubi-daikon) produces an elongated root in the shape of a giant white carrot about 20 to 35 cm (8 to 14 in) long and 5 to 10 cm (2 to 4 in) in diameter. Most Chinese and Indian forms are roughly similar.

The turnip-shaped giant white radish or Sakurajima radish is cultivated around Kagoshima in Japan and grows as large as 50 cm (20 in) in diameter and 45 kg (100 lb) in mass.[16]

A number of nonwhite varieties occur. The Cantonese lobak, lo pak, etc. sometimes refer to the usual Chinese form, but is also applied to a form of daikon with light green coloration of the top area of the root around the leaves. The Korean radish, also called mu, is similarly colored, but with a rounder, more potato-like shape.[17] Both are often spicier than the long white radishes. The heirloom watermelon radish is another Chinese variety of daikon with a dull green exterior, but a bright rose or fuchsia-colored center. Its Chinese name (t 心里美蘿蔔, s 心里美萝卜, xīnlǐměi luóbó) is sometimes irregularly romanized as the shinrimei radish and sometimes translated as the beauty heart, beautiful heart inside, or roseheart radish.

Tillage radish leaves behind a cavity in the soil when the large tap root decays, making it easier for the following years crops, such as potatoes, to bore deeper into the soil. Potatoes grown in a rotation with tillage radish do not experience growth restrictions associated with having a shallow hardpan, as the tillage radish can break the hardpan, and makes transfer of water, and other important nutrients, much easier for the rooting system. [18]

Nutrient retention is another important feature of tillage radish. The large tap root is designed to retain macro- and micro-nutrients, that would otherwise have the potential to be lost to leaching during the time when the field would otherwise be left empty. The nutrients from the root become readily available for the following years' crop upon the decay of the radish, which can boost yields, and reduce fertilizer costs.[19]

Dr. Robert Coffin, a potato industry consultant on Prince Edward Island, suggests that growing tillage radish could help boost potato yields, because of the effect that the large tap root that grows 6-10 inches has on mitigating the soil compaction. This makes it much easier for potatoes to grow to their full potential, and not be held back because of compaction issues in the soil.[20] 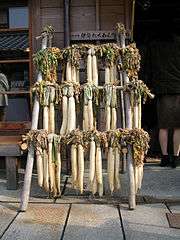 The Chinese and Indian varieties tolerate higher temperatures than the Japanese one. These varieties grow well at lower elevations in East Africa. If moisture is abundant, it can grow quickly; otherwise, the flesh becomes overly tough and pungent.[21] The variety Long White Icicle is available as seed in Britain, and will grow very successfully in Southern England, producing roots resembling a parsnip by midsummer in good garden soil in an average year.

The roots can be stored for some weeks without the leaves if lifted and kept in a cool, dry place. If left in the ground, the texture tends to become woody, but the storage life of untreated whole roots is not long.

Certain varieties of daikon can be grown as a winter cover crop and green manure. These varieties are often named "tillage radish" because it makes a huge, penetrating root which effectively performs deep cultivation. They bring nutrients lower in the soil profile up into the higher reaches, and are good nutrient scavengers, so they are good partners with legumes instead of grasses; if harsh winters occur, the root will decompose while in the soil, in the spring releasing early nitrogen stores.

In Japanese cuisine, many types of pickles are made with daikon, including takuan and bettarazuke. Daikon is also frequently used grated and mixed into ponzu, a soy sauce and citrus juice condiment. Simmered dishes are also popular such as oden. Daikon that has been shredded and dried (a common method of preserving food in Japan) is called kiriboshi-daikon (literally, "cut-dried daikon"). Daikon radish sprouts (kaiware-daikon) are used for salad or garnishing sashimi. Daikon leaf is frequently eaten as a green vegetable. Pickling and stir frying are common. The daikon leaf is part of the Festival of Seven Herbs, called suzushiro.

In Chinese cuisine, turnip cake and chai tow kway are made with daikon. The variety called mooli has a high water content, and some cookbooks recommend salting (or sweetening, depending on the region and context) and draining it before it is cooked. Sometimes, mooli is used to carve elaborate garnishes.[22] More commonly, daikon is referred as bailuobo (白蘿蔔) in Mandarin or lobak in Cantonese. Bailuobo is used in a variety of dishes for its unique and mild flavour after being boiled and cooked. For soups, bailuobo can be seen in bailuobo-paigu soup (白蘿蔔排骨湯), bailuobo-fanqie soup (白蘿蔔番茄湯), etc. Delicacies such as "shredded bailuobo" (白蘿蔔絲) and "cut bailuobo" (白蘿蔔塊) are popular domestic dishes too. Similar to Japanese cuisine, there are many types of pickles (in Mandarin Chinese: 咸菜 xian cai/榨菜 zha cai) made with bailuobo, for example "sour-sweet cut bailuobo" (酸甜白蘿蔔塊), "Spicy bailuobo" (麻辣白蘿蔔), "bailuobo zhacai" (白蘿蔔榨菜), etc.

In Korean cuisine, a variety is used to make kkakdugi, nabak kimchi, Dongchimi, and muguk soup. The younger version of the radish is used with the leaves in chonggak kimchi. This variety of daikon is shorter, stouter, and has a pale green color extending from the top, to roughly halfway down the root. The flesh is denser than the Japanese variety and the leaves are smooth in texture, which makes them better for pickling. The leaves of a mature plant are often too tough to be eaten raw, so are shade-dried to be used in soups, or boiled and seasoned into potherbs.

In the Philippines, the sour stew sinigang may include daikon.

In Pakistani cuisine, the young leaves of the daikon plant are boiled and flash fried with a mixture of heated oil, garlic, ginger, red chili, and a variety of spices. The radish is eaten as a fresh salad often seasoned with either salt and pepper or chaat masala.

In North India, daikon is a popular ingredient used to make sabzi, stuffed paranthas, pakodas, salads, pickles and as garnish. The plant's leaves are used to make dal and kadhi, among other dishes. In South India, daikon is the principal ingredient in a variety of sambar, in which roundels of the radish are boiled with onions, tamarind pulp, lentils, and a special spice powder.[24] When cooked, it can release a very strong odor. This soup, called mullangi sambar (Tamil: முள்ளங்கி சாம்பார் Kannada: ಮೂಲಂಗಿ ಸಾಂಬಾರ್; literally, "radish sambar") is very popular and mixed with cooked rice to make a good meal.

Daikon is very low in food energy. A 100-gram serving contains only 76 kilojoules or 18 Calories (5 Cal/oz), but provides 27% of the RDA for vitamin C. Daikon also contains the active enzyme myrosinase.