A kitchen market bazaar in Bangladesh, displaying a wide range of vegetables and fruits grown in the country's fertile plains

Bangladeshi cuisine (Bengali: বাংলাদেশের রান্না) is the national cuisine of Bangladesh. It is dominated by Bengali cuisine and has been shaped by the diverse history and riverine geography of Bangladesh. The country has a tropical monsoon climate.

Rice is the main staple food of Bangladesh and is served with a wide range of curries. Sublime Bangladeshi dishes exhibit strong aromatic flavors; and often include eggs, potatoes, tomatoes and aubergines. A variety of spices and herbs, along with mustard oil and ghee, is used in Bangladeshi cooking. The main breads are naan, paratha, roti, bakarkhani and luchi. Dal is the second most important staple food which is served with rice/porota/luchi. Fish is a staple in Bangladeshi cuisine, especially freshwater fish, which is a distinctive feature of the country's gastronomy. Major fish dishes include (ilish), pabda (butterfish), rui (rohu), pangash (pangas catfish), chitol (clown knifefish), magur (walking catfish), bhetki (barramundi) and tilapia. Meat consumption includes beef, lamb, venison, chicken, duck, squab and koel. Vegetable dishes, either mashed (bhurta), boiled (sabji), or leaf-based (saag), are widely served. Lobsters and shrimps are also often prevalent.

Gourmet pulao is served during feasts and festivals. Different types of Bengali biryani and pulao include Kachi (mutton), Tehari (beef), Ilish and Murg (chicken). Different types of kebabs include shikh, reshmi, shashlik, tikka and shami. The country is home to a huge spread of Bengali desserts and confectioneries, ranging from pan-fried or steamed rice cakes (pitha) to halwa and sweets made from fruits and sweetened cheese. Tea is widely consumed as the national beverage and offered to guests as a gesture of welcome. Popular snacks include samosas, pakoras,jhalmuri(puffed rice mixed with various spices), pitha(rice cakes),rolls etc.. The phuchka and "chotpoti" are major street foods. The Chittagong Hill Tracts in southeastern Bangladesh features bamboo shoot cuisine. Bangladesh is also the world's fifth-largest producer of tropical fruits.

Ancient Bengali diets included rice, fish, honey, dairy and vegetables. The region was an administrative and commercial bastion in South Asia during early Hindu and Buddhist kingdoms; and later Muslim sultanates. Mughlai cuisine developed in Bengal after the establishment of the province of Mughal Bengal in 1576, as part of the Mughal Empire. The city of Dhaka played an important role in influencing Bengali food with Mughal elements. The British Empire ruled the region for nearly two hundred years between the 18th and 20th centuries, during which the Bengal Renaissance shaped the emergence of modern Bengali cuisine. During the British Raj, Calcutta influenced many Bengali dishes. In the southeast, Arakan cuisine from Burma influenced dishes in Chittagong, particularly dried fish.

The Partition of Bengal in 1947 resulted in the separation of West Bengal from the Muslim-majority East, causing many shifts in demographics and culinary styles. Today, as opposed to the largely vegetarian cuisine in West Bengal, there is a greater emphasis on meat in Bangladesh.

Bangladeshi cuisine incorporates a large number of cosmopolitan influences, a legacy of the region's historic trade links with the Arab world, Persia, Portugal, the United Kingdom, and Burma. The Portuguese in Dhaka developed cheese. The British introduced tea.

Islamic dietary laws are prevalent across Bangladesh. Halal foods are food items that Muslims are allowed to eat and drink under Islamic dietary guidelines. The criteria specifies both what foods are allowed, and how the food must be prepared. The foods addressed are mostly types of meat allowed in Islam.

Bangladeshi people follow certain rules and regulations while eating. It includes warm hospitality and way of serving as well. This is known as Bengali Keta. The culture also defines the way to invite people in weddings and for the dinner as well. The gifts are given on different occasions. The Bengali Keta includes the way of serving the utensils in a proper manner.[1]

In Bangladeshi cuisine, some foods are popular across the entire region, while others are specific to a particular area.

The western areas mainly include the Khulna and Jessore areas and is very close to the West Bengal of India (the second highest region of Bengalis in the world). The cuisine of these areas are known as authentic Bengali recipes. Mug dal with hilsha fish head, dalna, chachari, luchi-payesh, hilsha with mustard, etc. are very popular in both the east and west parts of Bengal.

The northern part of Bangladesh has strong influences from Eastern Indian states, such as Assam and Manipur. The main characteristic of this food is that it is mainly sweet and has a lot of uses of banana throats, raw papaya fruit, raw mango, urad lentils and grilled or smoked vegetables.

The capital Dhaka and its territory region make up the central region, where fresh water fish are much more popular. Due to different ruling periods, the cuisine of this region is versatile. The Old Dhaka area is famous for the Nawab Awadhi cuisine. In Old Dhaka, kebabs, naans, bakharkhani, kachchi and pakki biriyani, haleem, mutton bhuni kichuri, and specialty mutton tehari are examples of dishes that became popular in other parts of the country.

The staples of Sylheti people are mainly rice and fish. Their choice and method of cooking is distinctly different to non-Sylhetis. Traditional foods include sour dishes, such as tengha (or tok) cooked with vegetables, including amra, defal, olives (belfoi), dewwaa, amshi, mango choti (aam choti), kul (boroi), hatkhora (or shatkora), ada zamir (ada lembu), and any other sour lemon-like tasty vegetable. The 360 disciples mentioned earlier brought their distinct cultures and cooking styles. These included many types of meat dishes, including chicken.

The Southern region of Bangladesh includes the tribal areas that have their own style of cooking methods and ideas. Other than that, the most southern part of this region is mainly influenced by the Arakan cuisine of Burma. Dried fish (shutki), bamboo shoots, sea fish, and many more are the specialties. They use lots of spicy flavors and coconuts in their food preparations. 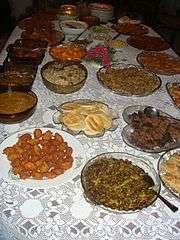 Chittagong and Southern Regions: Ziafat or Mezban feasts are popular throughout the area, where characteristic "heavy" dishes—dishes rich in animal fat and dairy—are featured. Saltwater fish and seafood are quite prevalent in these areas. Shutki (dried fish) is more available in this region than in other parts of the country. Bangladesh's Southern region is also popular worldwide for its fisheries industries with over 100 types of fishes exported every day from this region.

Barisal and Khulna: Piper chaba is a flowering vine in the family Piperaceae. It is called "Chui Jhal" in Bangladesh. Chui Jhal is originally the twig of a Piper chaba. It is a very expensive spice in Bangladesh, has great medicinal value, and tastes somewhat like horseradish. People in Khulna, Bagerhat, and Shatkhira cut down the stem, roots, peel the skin and cut it into small pieces and cook them with meat and fishes, especially with mutton. They love the spicy pungent flavor of spice all year round. A wide range of sweet water fishes are available in this region, which are highly famous all over the country.

Mustard oil and vegetable oil are the primary cooking mediums in Bangladeshi cuisine, although sunflower oil and peanut oil are also used. However, depending on the type of food, clarified butter (ghee) is often used for its aromatic flavors.

The use of spices for both meat and vegetable dishes is quite extensive and includes many combinations. The combination of whole spices, fried and added at the start or finish of cooking as a flavoring is special to each dish. Whole black mustard seeds and freshly ground mustard paste are also a typical combination. A pungent mustard sauce called kashundi is sauce for snacks or sometimes makes a base ingredient for fish dishes and vegetable dishes popular in Bangladesh. 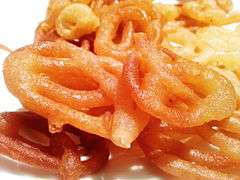 Jilapi, generally consumed as a sweetmeat, is one of the most popular starters at parties. 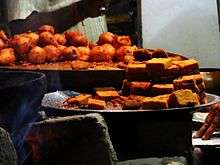 Bengali fritters (tele bhaja) made with vegetables and besan 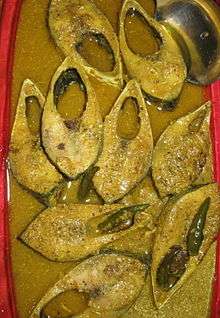 Smoked hilsa with mustard gravy is a popular dish with the country's national fish.

The following is a list of characteristic Bangladeshi recipe styles. Each entry is a class of recipes, producing different dishes depending on the choice of ingredients. There are tastes to which the Bangladeshi palate cater to. These include:

Each dish is to be eaten separately with a small amount of rice or ruti, so that individual flavors can be enjoyed. The typical Bangladeshi fare includes certain sequences of food. Two sequences are commonly followed, one for ceremonial dinners, such as a wedding, and the other for day-to-day sequence. Both sequences have regional variations, and sometimes there are significant differences in a particular course in Bangladesh.

Ceremonial occasions, such as weddings, use to have elaborate serving rituals, but professional catering and buffet-style dining can be seen now. The traditions have not disappeared; large family occasions and the more lavish ceremonial feasts will still have the same traditional rituals. 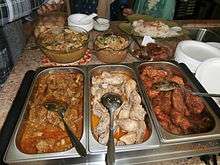 Various Bangladeshi meat dishes, consisting of curries made from beef, mutton and chicken

On special occasions, such as weddings or other similar ceremonies, Bangladeshi people serve guests with Biryani, which is very popular in the cities and urban areas, and Borhani, which is a spicy drink that is known to aid digestion.

In Bengali cuisine, Chutney is mainly served at the end of a meal. It is a sweet & sour thickened curry usually made with local seasonal fruits, such as raw mango, jujube, Bengal quince, etc. with pãch poron (five mix spices) and sugar.

Bengalis take pride on their desserts. Bengalis are the pioneers of making and inventing a variety of sweets in the Indian Subcontinent (pre-partition period). Most of these sweets have been created by a Ghosh (a dessert maker or dairy product seller cast). 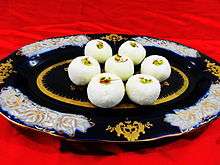 Sandesh, created with milk and sugar

The last item before the sweets is Doi (baked yogurt).[3] It is generally of two varieties, either natural flavour and taste or Mishti Doi (sweet yogurt), typically sweetened with charred sugar. This brings about a brown colour and a distinct flavour. Bangladeshi cuisine has a rich tradition of sweets. The most common sweets and desserts include: 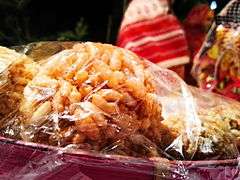