Dakhla (Arabic: الداخلة‎‎; Berber: ⴻⴷⴷⴰⵅⵍⴰ, Ed-Daḵla; Spanish: Villa Cisneros, Dajla, Ed-Dakhla) is a city in Western Sahara under Moroccan control. It is the capital of the Moroccan administrative region Dakhla-Oued Ed-Dahab. It has a population of 106,277[1] and is built on a narrow peninsula of the Atlantic Coast (es:Península de Río de Oro) about 550 km south of Laayoune. 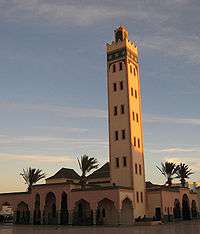 The area has been inhabited by Berbers since ancient times. Oulad Dlim is an Arab tribe of Himyari from Yemen that settled in the Sahara in the twelfth century. Dakhla was expanded or possibly founded by Spanish settlers during the expansion of their empire. The Spanish interest in the desert coast of Western Africa's Sahara arose as the result of fishing carried out from the nearby Canary Islands by Spanish fishers and as a result of the Barbary pirates menace.

Spanish fishers were seal fur traders and hunters, fishers and whalers along the Saharan coast from Dakhla to Cabo Blanco from 1500 to the present, engaging in whaling for Humpback whales and their calves, mostly around Cape Verde, and the Guinea gulf in Annobon, São Tomé and Príncipe islands through 1940. These fishing activities had a negative impact on wildlife, causing the disappearance or endangering of many species, particularly marine mammals and birds.[2][3]

The Spaniards established whaling stations with some cod fishing and trading. In 1881, a dock was anchored off the coast of the Río de Oro Peninsula to support the work of the Canarian fishing fleet. 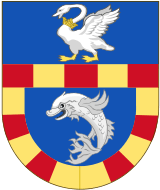 Seal of Villa Cisneros (nowadays Dakhla) during the Spanish colonization.

However, it was not until 1884 that Spain formally founded the watering place as Villa Cisneros, in the settlement dated in 1502 by papal bull. It was included in the enclaves conceded to the Spanish to the east of the Azores islands. In 1884, the settlement was promoted by the Spanish Society of Africanists[4] and funded by the government of Canovas del Castillo. The military and Spanish Arabist Emilio Bonelli recognized the coast between Cape Bojador and Cabo Blanco, founding three settlements in the Saharan coast: one in Villa Cisneros in honor of cardinal Francisco Jiménez de Cisneros, another in Cabo Blanco for seal hunting, which gave the name of Medina Gatell, and another in Angra de Cintra with the name of Puerto Badia, in honor of the Arabist and adventurer Domingo Badia. Bonelli got the native inhabitants of the peninsula de Río de Oro signed an agreement which placing them under the protection of Spain. Thanks to the presence of the three seatlements in December that year The Spanish government put in communication of the colonial powers assembled at the Berlin conference, which was adjudged possession of the territory lying between Cape Bojador and Blanco.

During the colonial period, Spanish authorities made Dakhla the capital of the province of Río de Oro, one of the two regions of what was known as Spanish Sahara. They built a military fortress and a modern Catholic church, both of which remain points of interest for visitors to the city, until the demolition of the fort by the Moroccans in 2004. A prison camp also existed at the fort during the Spanish Civil War, at which writers such as Pedro García Cabrera were imprisoned.

During the 1960s the Franco dictatorship also built Dakhla Airport, one of the three paved airports in Western Sahara. It was from Dakhla, then known as Villa Cisneros, that on January 12, 1976, General Gomez de Salazar became the last Spanish soldier to depart what until that moment had been the colony of the Spanish Sahara; faced with Moroccan and Mauritanian pressure, Spanish authorities decided to peacefully give up the territory instead of undertaking a fight they believed they could win, but which would have cost many lives on all sides. Between 1975 and 1979, Dakhla was the provincial capital of the Mauritanian province of Tiris al-Gharbiyya, as Mauritania annexed the southern portion of Western Sahara. Dakhla Airport is used as a civilian airport and by Royal Air Maroc. The 3 km. long runway can accommodate a Boeing 737 or smaller aircraft. The passenger terminal covers 670 m2 and is capable of handling up to 55,000 passenger/year.

Dakhla was occupied by Spain from the late 19th century until 1975, when power was then relinquished to a joint administration between Morocco and Mauritania.[5] There was a United Nations-sponsored ceasefire in 1991, but as recently as 2006, the majority of UN member states have refused to recognise Moroccan sovereignty in the area.[5]

Windsurfer and the Dragon Island in the background.

The main economic activity of the city is fishing and tourism. In recent years the town has become a centre for aquatic sports, such as kitesurfing, windsurfing and surf casting[5][6] and is known as a centre for watersports.[7]

Golfo de Cintra and the World Heritage of the Banc d'Arguin National Park are located in the south.

It is believed that oil reserves lie off the coastline of Dakhla, which has been a key reason for the territorial disputes.[5] US firm Kosmos Energy and its UK counterpart Cairn Energy began the hunt for black gold in Western Sahara in early 2015 without the permission of the native population.[5][8]

Oyster farming by hand is a traditional practice in Dakhla.[5] Oysters are first sold to people and businesses in Dakhla, then to restaurants in cities like Marrakech or Casablanca, and then any left are sold to Europe.[5] In April 2015, VICE reported that oysters had recently begun to be exported to high-end European restaurants.[5]

Dakhla has a mild arid climate (BWn) according to the Köppen climate classification. Dakhla receives an average 33 millimetres (1.3 in) of precipitation per year. The temperature averages around 17.4 °C (63.3 °F) during January, Dakhla's coldest month and around 23.0 °C (73.4 °F) during September, its warmest month. The temperature seems to be moderated by the Canary Current.

Like most areas in Western Sahara, Dakhla and vicinity areas are very poor in vegetation and are mostly covered by the Sahara Desert. Unlike on land however, sea waters are or had been very rich in sea life due to the highly productive Current System of Canary flowing offshore and the renown Nouadhibou upwelling which is located nearby as well. These environmental factors provides blessed conditions for local fisheries, and resulting in strong local biodiversity especially for birds. Among this, there has been a UNESCO proposal to create the "Dakhla National Park".[12]

The calm, sheltered water of the Dakhla Bay was once an ideal habitat for various forms of marine life, including marine mammals. Most of the local animals such as Mediterranean monk seals and whales (mostly North Atlantic right whales) have disappeared due to histories of slaughter and exploitation like in Cintra Bay. Atlantic gray whales were likely to be seen along the coast before extinction.[17]

On the other hand, monk seals are showing slow but certain recoveries and Ras Nouadhibou holds the world's most notable colony for this species.[18] Nowadays, very small, remnant groups of bottlenose dolphins and Atlantic humpback dolphins are the only marine mammals still seen regularly in Dakhla Bay while there are occasional visits by some other species including orcas[19] while cetaceans like minke,[20] or sei, pilot whales, beaked whales, and dolphins are more common in offshore waters in today's Western Sahara.[21][22][23]

Larger fish like groupers, seabasses or croakers inhabit along the coasts. Dakhla and Cintra Bay areas are considered to be spawning grounds for local sardines.[25]