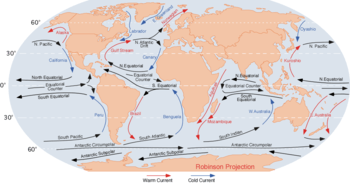 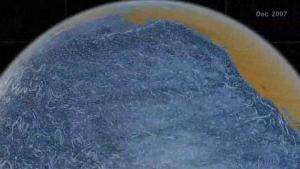 Distinctive white lines trace the flow of surface currents around the world. 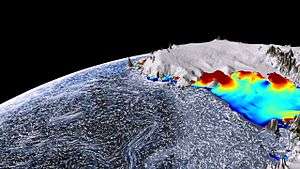 Animation of circulation around ice shelves of Antarctica.

An ocean current is a continuous, directed movement of seawater generated by forces acting upon this mean flow, such as breaking waves, wind, the Coriolis effect, cabbeling, temperature and salinity differences, while tides are caused by the gravitational pull of the Sun and Moon. Depth contours, shoreline configurations, and interactions with other currents influence a current's direction and strength.

Ocean currents flow for great distances, and together, create the global conveyor belt which plays a dominant role in determining the climate of many of the Earth’s regions. More specifically, ocean currents influence the temperature of the regions through which they travel. For example, warm currents traveling along more temperate coasts increase the temperature of the area by warming the sea breezes that blow over them. Perhaps the most striking example is the Gulf Stream, which makes northwest Europe much more temperate than any other region at the same latitude. Another example is Lima, Peru where the climate is cooler (sub-tropical) than the tropical latitudes in which the area is located, due to the effect of the Humboldt Current. 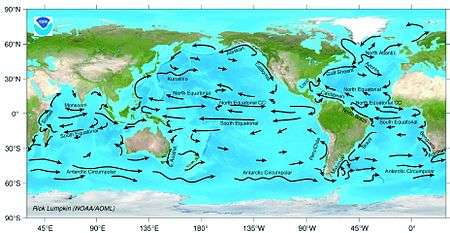 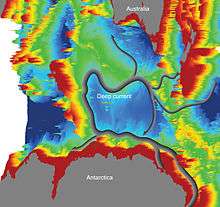 The bathymetry of the Kerguelen Plateau in the Southern Ocean governs the course of the new current part of the global network of ocean currents (Source:CSIRO)

Surface oceanic currents are sometimes wind driven and develop their typical clockwise spirals in the northern hemisphere and counter-clockwise rotation in the southern hemisphere because of imposed wind stresses. In wind driven currents, the Ekman spiral effect results in the currents flowing at an angle to the driving winds. The areas of surface ocean currents move somewhat with the seasons; this is most notable in equatorial currents.

Deep ocean basins generally have a non-symmetric surface current, in that the eastern equatorward-flowing branch is broad and diffuse whereas the western poleward flowing branch is very narrow. These western boundary currents (of which the Gulf Stream is an example) are a consequence of the rotation of the Earth.

Deep ocean currents are driven by density and temperature gradients. Thermohaline circulation is also known as the ocean's conveyor belt (which refers to deep ocean density driven ocean basin currents). These currents, called submarine rivers, flow under the surface of the ocean and are hidden from immediate detection. Where significant vertical movement of ocean currents is observed, this is known as upwelling and downwelling. Deep ocean currents are currently being researched using a fleet of underwater robots called Argo.

The South Equatorial Currents of the Atlantic and Pacific straddle the equator. Though the Coriolis effect is weak near the equator (and absent at the equator), water moving in the currents on either side of the equator is deflected slightly poleward and replaced by deeper water. Thus, equatorial upwelling occurs in these westward flowing equatorial surface currents. Upwelling is an important process because this water from within and below the pycnocline is often rich in the nutrients needed by marine organisms for growth. By contrast, generally poor conditions for growth prevail in most of the open tropical ocean because strong layering isolates deep, nutrient rich water from the sunlit ocean surface.

Surface currents make up only 8% of all water in the ocean, are generally restricted to the upper 400 m (1,300 ft) of ocean water, and are separated from lower regions by varying temperatures and salinity which affect the density of the water, which in turn, defines each oceanic region. Because the movement of deep water in ocean basins is caused by density driven forces and gravity, deep waters sink into deep ocean basins at high latitudes where the temperatures are cold enough to cause the density to increase.

Surface currents are found on the surface of an ocean, and are driven by large scale wind currents. They are directly affected by the wind—the Coriolis effect plays a role in their behaviors.[1] 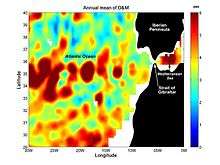 Coupling data collected by NASA/JPL by several different satellite-borne sensors, researchers have been able to "break through" the ocean's surface to detect "Meddies" -- super-salty warm-water eddies that originate in the Mediterranean Sea and then sink more than a half-mile underwater in the Atlantic Ocean. The Meddies are shown in red in this scientific figure.

Horizontal and vertical currents also exist below the pycnocline in the ocean's deeper waters. The movement of water due to differences in density as a function of water temperature and salinity is called thermohaline circulation. Ripple marks in sediments, scour lines, and the erosion of rocky outcrops on deep-ocean floors are evidence that relatively strong, localized bottom currents exist. Some of these currents may move as rapidly as 60 centimeters (24 inches) per second.

These currents are strongly influenced by bottom topography, since dense, bottom water must forcefully flow around seafloor projections. Thus, they are sometimes called contour currents. Bottom currents generally move equator-ward at or near the western boundaries of ocean basins (below the western boundary surface currents). The deep-water masses are not capable of moving water at speeds comparable to that of wind-driven surface currents. Water in some of these currents may move only 1 to 2 meters per day. Even at that slow speed, the Coriolis effect modifies their pattern of flow.

Antarctic Bottom Water is the most distinctive of the deep-water masses. It is characterized by a salinity of 34.65‰, a temperature of -0.5 °C (30 °F), and a density of 1.0279 grams per cubic centimeter. This water is noted for its extreme density (the densest in the world ocean), for the great amount of it produced near Antarctic coasts, and for its ability to migrate north along the seafloor. Most Antarctic Bottom Water forms near the Antarctic coast south of South America during winter. Salt is concentrated in pockets between crystals of pure water and then squeezed out of the freezing mass to form a frigid brine. Between 20 million and 50 million cubic meters of this brine form every second. The water's great density causes it to sink toward the continental shelf, where it mixes with nearly equal parts of water from the southern Antarctic Circumpolar Current. The mixture settles along the edge of Antarctica's continental shelf, descends along the slope, and spreads along the deep-sea bed, creeping north in slow sheets. Antarctic Bottom Water flows many times as slowly as the water in surface currents: in the Pacific it may take a thousand years to reach the equator. Antarctic Bottom Water also flows into the Atlantic Ocean basin, where it flows north at a faster rate than in the Pacific. Antarctic Bottom Water has been identified as high as 40° N on the Atlantic floor.

A small amount of dense bottom water also forms in the northern polar ocean. Although, the topography of the Arctic Ocean basin prevents most of the bottom water from escaping, with the exception of deep channels formed in the submarine ridges between Scotland, Iceland, and Greenland. These channels allow the cold, dense water formed in the Arctic to flow into the North Atlantic to form North Atlantic Deep Water. North Atlantic Deep Water forms when the relatively warm and salty North Atlantic Ocean cools as cold winds from northern Canada sweep over it. Exposed to the chilled air, water at the latitude of Iceland releases heat, cools from 10 °C to 2 °C, and sinks. Gulf Stream water that sinks in the north is replaced by warm water flowing clockwise along the U.S. east coast in the North Atlantic gyre.

Knowledge of surface ocean currents is essential in reducing costs of shipping, since traveling with them reduces fuel costs. In the wind powered sailing-ship era, knowledge was even more essential. A good example of this is the Agulhas Current, which long prevented Portuguese sailors from reaching India. In recent times, around-the-world sailing competitors make good use of surface currents to build and maintain speed. Ocean currents are also very important in the dispersal of many life forms. An example is the life-cycle of the European Eel.

Ocean currents are important in the study of marine debris, and vice versa. These currents also affect temperatures throughout the world. For example, the ocean current that brings warm water up the north Atlantic to northwest Europe also cumulatively and slowly blocks ice from forming along the seashores, which would also block ships from entering and exiting inland waterways and seaports, hence ocean currents play a decisive role in influencing the climates of regions through which they flow. Cold ocean water currents flowing from polar and sub-polar regions bring in a lot of plankton that are crucial to the continued survival of several key sea creature species in marine ecosystems. Since plankton are the food of fish, abundant fish populations often live where these currents prevail.

Ocean currents can also be used for marine power generation, with areas off of Japan, Florida and Hawaii being considered for test projects.

The OSCAR Near-realtime global ocean surface currents website from which users can create customized graphics and download the data. A section of the website provides validation studies in the form of graphics comparing OSCAR data with moored buoys and global drifters.

OSCAR data is used extensively in climate studies. maps and descriptions or annotations of climatic anomalies have been published in the monthly Climate Diagnostic Bulletin since 2001 and are routinely used to monitor ENSO and to test weather prediction models. OSCAR currents are routinely used to evaluate the surface currents in Global Circulation Models (GCMs), for example in NCEP Global Ocean Data Assimilation System (GODAS) and European Centre for Medium-Range Weather Forecasts (ECMWF).[2]