Eibner attended The Woodlands High School, and helped them win the 2006 5A state championship as a junior, with teammate Kyle Drabek. As a senior, Eibner was named 15-5A first-team all-district outfielder. Despite being drafted by the Houston Astros in the fourth round of the 2007 Major League Baseball draft, Eibner did not sign and attended the University of Arkansas. 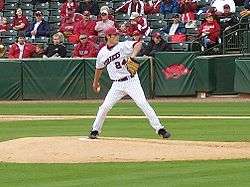 Eibner pitching for the Arkansas Razorbacks in 2009

As a freshman, Eibner lead the team in RBI and had three game-winning hits. For his efforts, Eibner was named to Baseball America's Freshman All-American team in 2008.[1] The following season, Eibner was named SEC Pitcher of the Week for his complete-game one-hit shutout win against the #1 Georgia Bulldogs.[2] Eibner struggled significantly at the plate, with his average dropping to .231 and striking out 60 times. However, when the 2009 Arkansas Razorbacks baseball team reached the College World Series, Eibner hit "one of the most memorable home runs in program history" when he tied an elimination game vs Virginia in the top of the ninth with a two-run home run.[3] Eibner returned for his junior season with the Razorbacks, hitting .333 with 22 home runs. On the mound, Eibner went 3-5 in 58 innings for the Razorbacks in the regular season. In the 2010 Tempe, Arizona Super Regional, Eibner hit a game-tying home run with the Razorbacks down to their final strike, extending the game to extra innings where the Razorbacks lost in the 12th.[4] Following the 2010 season, Eibner became the fourth Razorback to be named both a freshman All-American and All-American, including teammate Zack Cox.[5] He was also a John Olerud Award Semifinalist, Second Team All-SEC, and ABCA/Rawlings First Team All-South Region player.[6]

The Kansas City Royals selected Eibner in the second round of the 2010 MLB draft.[7] In 2013, Eibner played for the Northwest Arkansas Naturals of the Class AA Texas League.[1] The Royals added him to their 40-man roster after the 2015 season.[8][9]

The Royals promoted Eibner to the major leagues on May 26, 2016. He made his debut the following night at Kansas City's Kauffman Stadium, going 1-for-3 and scoring a run while striking out twice in the Royals' 7-5 win over the Chicago White Sox.[10] Facing off against the White Sox on May 28, 2016, the Royals were trailing 1-7 in the 9th inning, but Eibner completed the rally with a walk-off single to win it for the Royals 8-7.