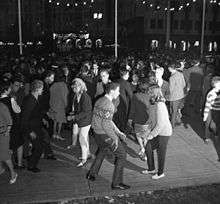 Fad dances are dances which are characterized by a short burst of popularity, while novelty dances typically have a longer-lasting popularity based on their being characteristically humorous or humor-invoking, as well as the sense of uniqueness which they have.

Dance crazes have been a part of social dancing for some time. In the Renaissance and after, European monarchs and nobles played host to a long succession of dance fashions, many of which spread into wider society. The minuet, the allemande, the schottische, the mazurka and the waltz had their day - though in many cases such dances endured for decades or even centuries before passing out of general use. By the time of Bach the suite of dances had evolved into a standardized cyclical musical form that formed the basis for the various movements of Baroque and early Classical instrumental works.

In the 20th century the advent of records caused novelty dances to arise and disappear much more frequently, spurred by printed media, radio, movies, television and the internet. In the early 1920s there was a string of dance crazes including the jitterbug and the Charleston. The tango swept the world in the late 1910s and early 1920s and was soon appropriated to the standard dance repertoire, the first in a series of 20th century Latin music dance crazes that included the merengue, the samba, the mambo, the rumba and the cha-cha-cha, many of which became standardized styles of western social dance and exerted influence on western popular music. Jazz, for example, was profoundly altered by Latin music from the 1940s on.

As the pop music market exploded in the late 1950s successive dance fads were commercialized and exploited. From the 1950s to the 1970s new dance fads appeared almost every week. Many were popularized (or commercialized) versions of new styles or steps created by African-American dancers who frequented the clubs and discothèques in major U.S. cities like New York, Philadelphia and Detroit. Among these were the Madison, "The Swim", the "Mashed Potato", "The Twist", "The Frug" (pronounced 'froog'), "The Watusi", "The Shake" and "The Hitchhike". Following the Foxtrot, '60s dance crazes had animal names, including "The Pony", "The Dog" and "The Chicken" (not to be confused with the later Chicken Dance).

In 1965 the Mexican-American group Cannibal and the Headhunters had a hit with the 1962 Chris Kenner song Land of a Thousand Dances which included the names of sixteen such dances. One list of Fad Dances compiled in 1971 named over ninety dances.[1] Standardized versions of dance moves were published in dance and teen magazines, often choreographed to popular songs. Songs such as "The Loco-Motion" were specifically written with the intention of creating a new dance and many more pop hits, such as "Mashed Potato Time" by Dee Dee Sharp, were written to exploit recent successful novelties.

In the early 1970s the disco spawned a succession of dance fads including the Bump, The Hustle, and the YMCA. This continued in the 1980s with the popular song "Walk like an Egyptian", in the 1990s with the "Macarena", in the 2000s with "The Ketchup Song" and in the 2010s with "Gangnam Style". Contemporary sources for dance crazes include music videos and movies.

There are fad dances which are meant to be danced individually as solo, others are partner dances, and yet others are danced in groups. Some of them were of freestyle type, i.e., there were no particular step patterns and they were distinguished by the style of the dance movement (Twist, Shake, Swim, Pony, Hitchhike). Only some have survived to the present day, sometimes only as the name of a step (Suzie Q, Shimmy) or of a style (Mashed Potato) in a recognized dance. Fad dances are in fashion at the time of their popularity. They come to be associated with a specific time period, and can evoke particular forms of nostalgia when revived.