Folk dance in an Assyrian party.

Assyrian Folk Dances are dances that are performed throughout the world by Assyrians, mostly on occasions such as weddings, community parties and other jubilant events.

Assyrian folk dances are mainly made up of circle dances that are performed in a line, which may be straight, curved, or both. Most of the dances allow unlimited number of participants, with the exception of the Sabre Dance, which require three at most. Assyrian dances would vary from weak to strong, depending on the mood and tempo of a song.

All Assyrians dances, with the exception of the Sabre Dance, are done in a connected circle. Most Assyrian line dances are itinerant dances and move laterally. In an open floor space, the lines assume open circular shapes where they tend to curve and acquire spiral shapes as determined by floor space availability.[3]

There are only five ways of moving the body; Step, leap, run, hop and jump. The legs are also used to stamp, stomp and kick. The arms are used predominantly and they'd usually move independently of the legs. Arm gestures include bouncing, swinging forward and back, moving side-to-side, lifting above the head and clapping.

In many dances, the torso, along with the shoulders and arms, bounce up and down rhythmically. Stomps and stamps are also executed in Assyrian folk dances. Knee bends, deep squats and leg extensions are a regular occurrence in Assyrian dance.[4]

The connections include, hand-to-hand, hand to shoulder, and hand to hip, with hand-to-hand being the most popular. The hand-to-hand type has three connections; The "W", the "V" and the "T". The "W" arm hold is the most common where the arms are raised into the "W" position (or, at least, it appears to look like the letter W). The "T" dance is where hands are placed on other participants's shoulders. This is the least common dance of the three.[5] 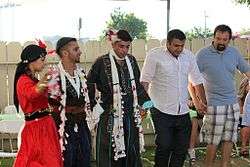 Traditional clothing may be worn in the folk dance.

These Assyrian folk dances aren't as common, but they're still practiced in marginal communities: