"Do the Bartman" is a song from the 1990 Simpsons album The Simpsons Sing the Blues. It was performed by The Simpsons cast member Nancy Cartwright (the voice of Bart Simpson), with backing vocals from Michael Jackson, alongside additional vocals from Dan Castellaneta (voice of Homer Simpson). It was produced and written by American recording artist Bryan Loren, and released as a single on November 20, 1990. The song was referenced in the 2005 episode, The Heartbroke Kid, when Homer tells Bart to "do the Bartman" to prevent a heart attack caused by his overeating.

Even though it received a lot of radio airplay in the United States, "Do the Bartman" was never officially released as a single in the United States. It topped the charts in Australia, Ireland, New Zealand, Norway, and the United Kingdom. Additionally, it reached the top 10 in Sweden and the Netherlands, and was certified gold in the United Kingdom. A music video, which was directed by Brad Bird, was released for the song in 1991. The video became a hit on the American network MTV and received a nomination at the 1991 MTV Video Music Awards. 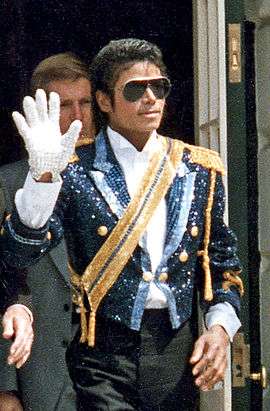 Michael Jackson provided back up vocals for "Do the Bartman".

The album The Simpsons Sing the Blues was released in September 1990. The first single from it was the rap song "Do the Bartman", performed by Bart Simpson's voice actor Nancy Cartwright and released on November 20, 1990.[2] Rumors began spreading in the summer of 1990 that Michael Jackson would write a song for Bart on the album. This song was reported early on to be "Do the Bartman", but executive producer James L. Brooks issued a press release in September 1990 apologizing for the misunderstanding and stating that song was actually written by one of Jackson's friends, Bryan Loren.[3]

However, The Simpsons creator Matt Groening later stated during an appearance at the 1998 World Animation Celebration convention in Pasadena, California that "Do the Bartman" was actually co-written and co-produced by Jackson,[2][4][5] but he could not receive credit for it because he was under contract to another record label.[6] Groening told a crowd at the convention that had gathered for a "The Simpsons tribute" that it had "always [been] amazing to me that no one ever found out that Michael Jackson wrote that song. [...] He was a big fan of the show."[7]

Jackson was a fan of The Simpsons, especially Bart,[8] and had called the producers one night offering to write Bart a number one single and do a guest spot on the show, which is how "Do the Bartman" came about.[9] Jackson eventually guest-starred in the episode "Stark Raving Dad" (season three, 1991) under the pseudonym John Jay Smith.[10] He also wrote a song for that episode called "Happy Birthday Lisa", which was later included in the album Songs in the Key of Springfield.[11] Bryan Loren has stated that Jackson had provided background vocals for "Do the Bartman".[12][5]

In July 2015, when Bryan Loren was selling the publishing and songwriting rights for the song, Loren stated that "despite Matt Groening's repeated confessions, I am the sole writer of the song".[5] Loren stated that Jackson's contributions included back up vocals, providing the title "Do the Bartman" and that Jackson insisted his own name to be mentioned in the lyrics.[5]

Critical reviews of the song were mostly positive. Ken Tucker of Entertainment Weekly described it as "not bad," and commented that Bart's high voice "echoes the beats nicely."[13] The Daily Vault's Benny Balneg liked that the song disengaged itself from the album's "blues tag" and incorporated more "contemporary elements" into its sound.[14] He added that he thought the song had a "catchy beat" and an "infectious chorus."[14] The Long Beach Press-Telegram's Patricia Smith called "Do the Bartman" a "surprisingly funky tune."[15] Monika Bartyzel of Cinematical, however, thought the song was a "cheesy number."[16]

"Do the Bartman" and its music video have become study material for sociology courses at the University of California Berkeley, where it is used to "examine issues of the production and reception of cultural objects, in this case, a satirical cartoon show", and to figure out what it is "trying to tell audiences about aspects primarily of American society, and, to a lesser extent, about other societies."[17]

While the song was never officially released as a single in the United States, it did top the charts in Australia, Ireland, New Zealand, Norway, and the United Kingdom. In the latter country, the song spent three weeks at the top of the UK Singles Chart, and became Britain's seventh best-selling song of 1991.[18] "Do The Bartman" has shipped at least 400,000 units in the United Kingdom and was certified gold by the British Phonographic Industry on February 1, 1991.[19][20] The song's success in the United Kingdom was remarkable, given that at that time The Simpsons was airing only on British satellite television station Sky One. It would be five years before it was first on terrestrial television in Britain, airing on BBC One and later BBC Two.[21][22]

In March 1991, "Do the Bartman" became the first single to reach number one in Australia that was not available on 7 inch vinyl.[26]

The music video features the typical plot of Bart rebelling against authority when he decides to put his own spin on a rigidly choreographed dance presentation at Springfield Elementary School. The music video for "Do the Bartman" was directed by Brad Bird, with dance choreography by Michael Chambers. Nobody from the staff of The Simpsons wanted to direct it because they were busy doing the show, but Bird finally agreed to do it after having been asked four times. He had a very short amount of time to finish the video because it was supposed to coincide with the release of The Simpsons Sing the Blues.[4]

The entire music video was storyboarded in only two days in the United States. Bird then got on a plane to Budapest, Hungary, where the video was animated by Varga Studio. They thought the video was going to be animated as simply as the original The Simpsons shorts, shown on The Tracey Ullman Show, so when Bird told them that it was going to be done in full animation with no repeated scenes, they "went into deep shock".[4] The animators added the wraparound at the beginning to set Bart against the crowd and put the video in "some sort of context."[4]

The video was nominated for Best Special Effects at the 1991 MTV Video Music Awards.[27][28] It was the number one music video on rotation on American MTV network between January and March 1991.[29] Following the death of Michael Jackson on June 25, 2009, the music video was broadcast by the Fox network on June 28, 2009—ahead of a rerun of the episode "Wedding for Disaster"—and featured a title card paying tribute to Jackson.[30]