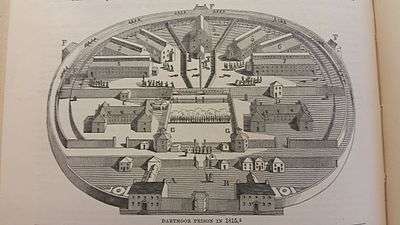 HM Prison Dartmoor is a Category C men's prison, located in Princetown, high on Dartmoor in the English county of Devon. Its high granite walls dominate this area of the moor. The prison is owned by the Duchy of Cornwall, and is operated by Her Majesty's Prison Service.

In 1805, Great Britain was at war with Napoleonic France; a conflict during which thousands of prisoners were taken and confined in prison "hulks" or derelict ships. This was considered unsafe, partially due to the proximity of the Royal Naval dockyard at Devonport (then called Plymouth Dock), and as living conditions were appalling in the extreme, a prisoner of war depot was planned in the remote isolation of Dartmoor. Construction started in 1806, taking three years to complete. In 1809 the first French prisoners arrived, and were joined by American POWs taken in the War of 1812. At one time the prison population numbered almost 6,000. Many prisoners died and were buried on the moor. Both French and American wars were concluded in 1815, and repatriations began. The prison then lay empty until 1850, when it was largely rebuilt and commissioned as a convict gaol. With the establishment of the prison farm in about 1852, all the prisoners' remains were exhumed and re-interred in two cemeteries behind the prison.

Designed by Daniel Asher Alexander and constructed originally between 1806 and 1809 by local labour, to hold prisoners of the Napoleonic Wars, it was also used to hold American prisoners from the War of 1812. Although the war ended with the Treaty of Ghent in December 1814, many American prisoners of war still remained in Dartmoor.

From the spring of 1813 until March 1815 about 6,500 American sailors were imprisoned at Dartmoor. These were naval prisoners, and impressed American seamen discharged from British vessels. Whilst the British were in charge of the prison, the prisoners created their own governance and culture. They had courts which meted out punishments, there was an in-prison market, a theatre and a gambling room. About 1,000 of the prisoners were black Americans.[2][3]

After the prisoners heard of the Peace of Ghent, they expected immediate release, but the British government refused to let them go on parole or take any steps until the treaty was ratified by the United States Senate, 17 February 1815. It took several weeks for the American agent to secure ships for their transportation home, and the men grew very impatient. On 4 April, a food contractor attempted to work off some damaged hardtack on them in place of soft bread and was forced to yield by their insurrection. The commandant, Captain T. G. Shortland, suspected them of a design to break out of the gaol. This was the reverse of the truth in general, as they would lose their chance of going on the ships, but a few had made threats of the sort, and the commandant was very uneasy.[3]

About 6:00 pm of the 6th, Shortland discovered a hole from one of the five prisons to the barrack yard near the gun racks. Some prisoners were outside the fence, noisily pelting each other with turf, and many more were near the breach (and the gambling tables), though the signal for return to prisons had sounded. Shortland was convinced of a plot, and rang the alarm bell to collect the officers and have the men ready. This precaution brought back a crowd just going to quarters. Just then a prisoner broke a gate chain with an iron bar and a number of the prisoners pressed through to the prison market square. After attempts at persuasion, Shortland ordered a charge which drove some of the prisoners in. Those near the gate, however, hooted at and taunted the soldiery, who fired a volley over their heads. The crowd yelled louder and threw stones, and the soldiers, probably without orders, fired a direct volley which killed and wounded a large number. Then they continued firing at the prisoners, many of whom were now struggling to get back inside the blocks.[3]

Finally the captain, a lieutenant and the hospital surgeon (the other officers being at dinner) succeeded in stopping the shooting and caring for the wounded – about 60, 30 seriously, besides seven killed outright. The affair was examined by a joint commission, Charles King for the United States and F. S. Larpent for Great Britain, which exonerated Shortland, justified the initial shooting and blamed the subsequent deaths on unknown culprits. The British government provided for the families of the killed, pensioned the disabled and promoted Shortland.[3]

A memorial has been erected to the 271 POWs (mostly seamen) who are buried in the prison grounds.

Dartmoor was reopened in 1851 as a civilian prison, but was closed again in 1917, when it was converted into a Home Office Work Centre for certain conscientious objectors granted release from prison; cells were unlocked, inmates wore their own clothes, and could visit the village in their off-duty time. It was reopened as a prison in 1920, and then contained some of Britain's most serious offenders. 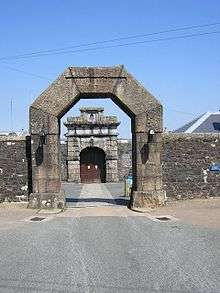 On 24 January 1932, there was a major disturbance at the prison. The cause of the riots is generally attributed to the food, not generally but just on specific days when it was suspected it had been tampered with prior to the disturbance.[4] There had also been other instances of disobedience prior to this, according to the official Du Parcq report into the incident such as a model prisoner attacking a popular guard with a razor blade and rough treatment of a prisoner being removed to solitary.[5] At the parade later that day, 50 prisoners refused orders, and the rest were marched back to their cells but refused to enter. At this point, the prison governor and his staff fled to an unused part of the prison and secured themselves in there. The prisoners then released those held in solitary. There was extensive damage to property and a prisoner was shot by one of the staff but no prison staff were injured.[6] According to Fitzgerald (1977) "Reinforcements arrived, and within fifteen minutes these 'vicious brutes', who for some two hours had terrorized well-armed prison staff, and effectively controlled the prison, had surrendered and been locked up again".[7]

In 2001 a Board of Visitors report condemned sanitation at Dartmoor as well as highlighting a list of urgent repairs needed at the prison.[9] A year later Dartmoor was converted to a Category C prison for less violent offenders.

In 2002 the Prison Reform Trust warned that Dartmoor Prison may be breaching the Human Rights Act 1998 due to severe overcrowding at the jail.[10] A year later, however, the Chief Inspector of Prisons declared that Dartmoor had made substantial improvements to its management and regime.[11] In March 2008 staff at the prison passed a vote of no confidence in the governor Serena Watts, claiming they felt bullied by managers and unsafe.[12]

Previous governor Tony Corcoran is now governor of HMP Haverigg, taking up the post in early 2013.

Dartmoor still has a misplaced reputation for being a high-security prison that is escape-proof. Now a Category C prison, Dartmoor houses mainly non-violent offenders and white-collar criminals. It also holds sex offenders and offers sex offender treatment programmes intended to make the offender realise their behaviour is unacceptable.[13] Some subsequently volunteer for behaviour changing treatment with medication under a scheme being piloted at HMP Whatton which has had encouraging results.[13]

The 'Dartmoor Jailbreak' is a yearly event, in which members of the public 'escape' from the prison and must travel as far as possible in 4 days, without directly paying for transport, raising money for charity.[14]

In September 2013 it was announced that discussions would commence with the Duchy of Cornwall about the long-term future of HMP Dartmoor.[15] In January 2014 it was stated on the BBC news website that the notice period with the Duchy for closing is 10 years.[16] In November 2015 the Ministry of Justice confirmed that, as part of a major program to replace older prisons, it would not renew its lease on the prison.[17]

The Dartmoor Prison Museum, located in the old dairy buildings, focuses on the history of HMP Dartmoor. Exhibits include the prison's role in housing prisoners of war from the Napoleonic Wars and the War of 1812, manacles and weapons, memorabilia, clothing and uniforms, famous prisoners, and the changed focus of the prison. It also sells (2015) garden ornaments and other items made in the prison concrete and carpentry shops by prisoners engaged in educational courses.

There are also displays and information on less well known aspects of the prison such as the incarceration of conscientious objectors during world war one. 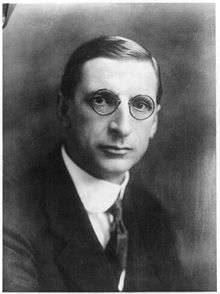