As a child actress, Garner had her first film role in 1938. She won the Academy Juvenile Award for her work in A Tree Grows in Brooklyn (1945).(Whether the award was given specifically for her work in that film is debatable. The Official Academy Awards Database lists the award as "outstanding child actress of 1945," without mentioning a specific film.[1] The Inside Oscar reference book about Academy Awards refers to "Peggy Ann Garner of A Tree Grows in Brooklyn and Junior Miss" in citing the award.)[2]

Featured roles in such films as Black Widow (1954) did not help to establish her in mature film roles, although she progressed to theatrical work and she made quite a few acting appearances on television as an adult. 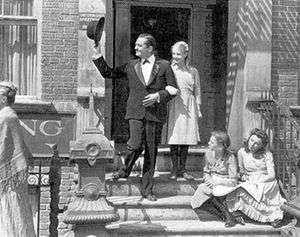 Born in Canton, Ohio, Peggy Ann Garner was the daughter of William H. Garner,[3] an attorney,[4] and Virginia Craig Garner.[5] She was pushed by her mother into the limelight[4] and entered in talent quests while still a child. Her parents divorced February 26, 1947.[5]

Garner was a model for still photographers for two years before she began working in films.[6]

In 1949, Garner starred in Peg O' My Heart at the Famous Artists Playhouse in Fayetteville, New York.[3] In 1954, she toured with a troupe in several states, performing in The Moon Is Blue.[7] Garner headlined the national tour of the William Inge hit Broadway play "Bus Stop" beginning in 1955. She starred opposite Albert Salmi, who later became her husband. Garner also appeared opposite Dick York in the touring production.

Garner's Broadway credits include Home Is the Hero, First Lady, The Royal Family, and The Man.[8]

By 1938, Garner had made her first film appearance, and over the next few years she appeared in several more films, including Jane Eyre (1943) and The Keys of the Kingdom (1944). She reached the height of her success at the age of 13 in A Tree Grows in Brooklyn (1945), winning an Academy Juvenile Award largely for this performance. In the same year she showed she could handle comedy by giving a fine performance in Junior Miss (1945).[9]

Like many child performers, Garner was unable to make a successful transition into adult film roles.

In 1950, Garner starred as Esther Smith in the radio comedy Meet Me in St. Louis. The program ran two months on NBC.[10]

In the summer of 1960, a 1958 episode of General Electric Theater, 'The Unfamiliar,' was repeated as an episode of Producer's Choice,[12] and she was cast as Julie in the episode "Stopover" of David McLean's NBC western series, Tate. In 1960 and again in 1962, she was cast in the episodes "Once Around the Circuit" and "Build My Gallows Low", respectively, of the ABC series, Adventures in Paradise, with Gardner McKay.

After Garner's film career ended, she ventured into stage acting and had some success but also worked as a real estate agent[13] and fleet car executive between acting jobs in order to support herself. In 1978, she surprised film audiences after a decade away from any feature film when she appeared as the pregnant aunt of the bride 'Candice Ruteledge' in the critically acclaimed ensemble Robert Altman film, A Wedding (1978). (Garner had worked with Altman before; he directed a 1961 episode of Bonanza, "The Rival", in which she appeared as a girl being courted by Hoss Cartwright and she appeared in an episode of Combat! (Off Limits in 1963) also directed by Altman .) Her final screen performance was a small part in a 1980 made-for-television feature This Year's Blonde.

Garner died from pancreatic cancer in 1984 at the age of 52. Garner's mother outlived both her only child and her only grandchild.