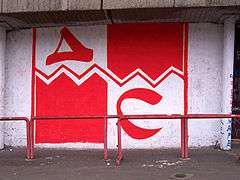 Delije (Serbian Cyrillic: Делије) is an umbrella name referring to the supporters of various sports clubs that compete under the Red Star Belgrade Sports Society banner. The name is derived from the Serbian word delija, meaning "brave, hero".

Though Red Star Sports Society has clubs in over twenty sports, Delije mostly focus on football (FK Crvena zvezda) and basketball (KK Crvena zvezda). The name Delije first began to be used by hardcore Red Star supporters during the late 1980s, with official inauguration taking place on 7 January 1989. Up to that point, the die-hard fans were scattered amongst about eight groups that shared the north stand at the Red Star Stadium (known colloquially as Marakana), most prominent of which were the Red Devils, Ultras and Zulu Warriors.

Delije organizational structure is fairly decentralized with many subgroups present at the stadium's north stand - the gathering point of the club's most loyal and passionate fans. At any given time, one or two subgroups assert themselves as the most prominent through dedication, regular attendance, willingness to fight, etc. and as a result get to hang their banners on the most visible parts of the stand, their leaders get to lead the chants, etc. Currently, the subgroup Belgrade Boys (known by the acronym BBRS) enjoys the greatest clout while other Belgrade subgroups such as Ultra Boys, Brigate and Heroes, also wield a lot of influence. Since Red Star enjoys a lot of support outside of Belgrade as well, various organized groups exist in cities across Serbia, Montenegro, and Republika Srpska as well as in Serbian diaspora. The most organized and numerous of those include Nišlije (from Niš), NSCZ (from Novi Sad), Kopre Nedri (groupings of various subgroups from numerous cities in Republika Srpska), Čačani (from Čačak), Delije Šabac (from Šabac), Armija 5 (grouping of various subgroups from Smederevo, Požarevac and several neighbouring towns), Delije Kruševac (from Kruševac), Barani (from Bar in Montenegro), Delije Kumanovo (from Kumanovo in Macedonia), Orthodox Boys (from Slovenia), Ultra klan (grouping of various subgroups from Serbian diaspora).

As a sign of appreciation, during the late 1990s, Red Star painted the word Delije in block letters across the north stand. Since the mid-1980s the supporters maintain friendly relations with Olympiacos CFP ultras - a friendship based on common Orthodox faith and same club colours. Since the mid-2000s FC Spartak Moscow fans are also included in this friendship.

Since the very founding of Red Star Belgrade, there was a section of members-friends of the Sports Club Red Star, which had about 100 faithful supporters encouraging the red-whites which started to follow the club on all away matches in the newly formed Yugoslav First League. The section was mostly made of young men from the affluent parts of the city - Senjak, Topčidersko Brdo, Dedinje, Knez Mihailova Street, but amongst the first Red Star supporters there were also children of workers, which would eventually form the "first team" of supporters and leaders in the future. All of these young men had something special, because they represented the very soul of Belgrade.

During the 1950s, a separation between spectators and pure supporters finally became evident, mostly because supporters began to bring rattles, bells and a few flags to the stadium. With the arrival of Dragoslav Šekularac to Red Star many things changed. The fans saw their reflection on the field, because Šekularac had class as well as talent. Supporters especially appreciated Šeki's battling spirit, which was a magnet for new red-white fans young and old.

In the 1980s the North side was split between two big supporters groups, the "Ultras" and the "Red Devils". The Ultras followed Italian influence which consisted of long and melodic songs, fireworks, and choreography. The Red Devils based their group on Serbian habits, which were often mixed with English habits such as heavy drinking, and constantly fighting rivals. Ultras and Red Devils leaders were not aware that they had become idols to the younger generation, which was very numerous at the stadium. These two groups regularly caused unrest, which brought them into conflict with the communist police. Because of many incidents people belonging to these two groups were regularly arrested.

During the mid-1980s, Ultras and Red Devils were strengthened by a new group, the "Zulu Warriors". These three groups became the body of the North Stand. However, there were also many other groups with much less influence, such as Winners, Red and White Angels, Brigate, Red Star Army, Red Star Clan, and the Eagles.

The late 1980s came with strong nationalism, and Red Star supporters, in the spirit of their tradition declared themselves as extreme Serbian nationalists. They would often chant Serbian songs, and carry Serbian flags. At the moment when politics was already deeply inside stadiums a big meeting of all North groups was held with only one goal that no other names except Red Star, Belgrade and Serbia should be spoken at the games. That rule is obligated to be followed even today, although fans use every opportunity to express their political opinion.

Soon afterward fans got their own room for meetings, and membership cards were also made. This is when most of these groups joined together. In 1989 the Delije were formed and they stated that the intent of the group was to be a modern European group, which became true in a very short while. 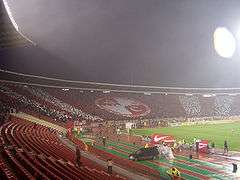 Delije Sever during the 137th Eternal Derby in November 2009.

During the 1990s the best and the worst came to Red Star and Delije. Yugoslavia slowly deteriorated, nationalism had taken over across the whole of the Balkans, and a war was proclaimed unavoidable by many. On May 13, 1990 an estimated 3,000 of the Delije traveled to Zagreb's Maksimir to see Red Star take on Dinamo Zagreb. Always an intense rivalry, the fact that this particular match took place just weeks after Croatia had held its first multi-party elections in about 50 years (which, incidentally, was won by the parties favouring Croatian independence) only served to increase the tension between the two. The ensuing riot was one of the most violent events in sports history, and many believe that the riot was the first sign of the war to come. It has served as a prime example of what politics can do when mixed with sport.

The Delije however would shortly be rewarded with the best Yugoslav football team ever assembled. During their run in the 1990–91 European Cup the Delije followed Red Star wherever they played. They traveled all over Europe, defeating Grasshopper Zürich, Glasgow Rangers, Dynamo Dresden and German giants Bayern Munich along the way to Bari (the host of the final), where they faced Marseille. The 1991 Red Star team gave the fans something that many Delije could only have dreamt about until then; the European Cup trophy, defeating the French side 5-3 on penalties, with Prosinečki, Binić, Belodedić, Mihajlović and Pančev scoring. This same team even went on to become world champions, by defeating Colo-Colo of Chile 3-0 in the Intercontinental Cup.

Members of the Delije provided the base for the Serb Volunteer Guard, a paramilitary unit led by Željko Ražnatović "Arkan" that participated in the Yugoslav wars. "Arkan's Tigers" made a dramatic appearance on the north stand during the Belgrade derby game of 22 March 1992, played between Red Star and Partizan, where they held up road signs saying: '20 miles to Vukovar'; '10 miles to Vukovar'; 'Welcome to Vukovar'. More signs followed, each named for a Croatian town that had fallen to the Serbian army. Arkan was at that time the director of the Red Star supporters' association.[1]

After the war in Yugoslavia and the NATO bombings during the Kosovo crisis crippled the economy and ruined sport in the country. The league is now considered poor at best. The Delije can still be seen in action when Red Star is competing in a European tournament or when they lock horns with Partizan. After a long series of struggles and armed conflicts in Bosnia and Croatia, which took five years in all, Red Star was allowed to take part in a first European competition after five years of ban in European cups. The first international game after the civil war ended was a friendly match with Olympiacos (4–1) at Marakana. A large flag with "Welcome Orthodox Brothers" was set along the east stand as a welcome gesture to Greek fans and players. Today there is a solid friendship between the two supporting groups, and they have an ultra-union group, Orthodox Brothers. FC Spartak Moscow fans also joined the group, so seeing fans of all the three clubs at one stand supporting the same team - especially at away European matches.