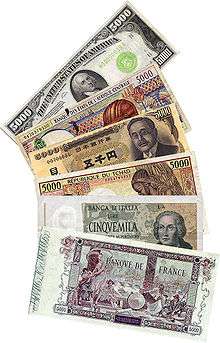 Banknotes of 5000 denomination in different currencies including Franc, Yen, Lire, and Dollar

Denomination is a proper description of a currency amount, usually for coins or banknotes. Denominations may also be used with other means of payment like gift cards. For example, five euros is the denomination of a five euro note.

In a currency, there is usually a main unit (base), and a subunit that is a fraction of the main unit. In some countries, there are multiple levels of subunits. In the former Ottoman Empire, 1 lira = 100 kuruş = 4000 para = 12000 akçe. Today, only a few places have more than one subunit, notably Chinese speaking regions: the mainland China (renminbi), the Hong Kong (dollar), and Republic of China's (New Taiwan dollar). In addition, the Jordanian dinar is divided into 10 dirham, 100 qirsh/piastres, or 1000 fils. Many countries where Western European languages are spoken currently have their main units divided into 100 subunits. Some currencies that previously had subunits no longer do, because inflation has rendered the subunit useless. A prominent example is the Japanese yen, which was formerly divided into 100 sen or 1000 rin. Both subunits were demonetized at the end of 1953.[1]

Occasionally, a super unit is used as a multiple of the main unit. Examples include Korean won = 5 yang in 1893, Iranian toman 10 rials (used informally today). In the Ottoman Empire, lira and kuruş were super units at some point before becoming the main unit.

A decimal currency is a currency where the ratio between the main unit and the subunit is an integral power of 10. Non-decimal currencies are now rare but had some advantages in daily life transactions. For example, 1 South German Gulden = 60 Kreuzer. 60 can be divided into 2, 3, 4, 5, 6, 10, 12, 15, 20 or 30 parts that are still integers, making pricing easy. This advantage (in an age without mechanical or electronic calculators) and the lack of widespread accurate weighing apparatus (meaning an item might sometimes simply be divided in 2,4,6 etc.) coupled with tradition were the reasons why non-decimal currencies were used.

In theory, two countries currently use non-decimal currency: Mauritania (1 ouguiya = 5 khoums) and Madagascar (1 ariary = 5 iraimbilanja). In practice, however, the value of the main unit in each case is so low (less than 1/1000 of a United States dollar) that the sub-unit is not of any practical use and is rarely seen in circulation. In the case of the iraimbilanja, this is a carryover of the Madagascar's previous currency, the Malagasy franc, which had the ariary as a super unit worth 5 francs, and iraimbilanja was an alternate term for the franc. The last major countries to use non-decimal currencies in practice were the United Kingdom (until 1971), Ireland (1971), Malta (1972) and Nigeria (1973).

It is common to name a unit with a unit of weight, such as pound, lira, and baht. In most cases, these currencies were originally defined as that amount of some precious metal. Another choice of name is some form of derivative of the political entity. The Afghan afghani and European euro fall into this category. Sometimes the name is simply the name of the metal of which the coins were or are made, such as Polish złoty (“golden”) and Vietnamese đồng (“copper”), or its geographical origin, e.g. Joachimsthaler (see Dollar).