The Hong Kong dollar (Chinese: 港元; Jyutping: gong2 jyun4; lit. "Harbour Money"; sign: $, HK$; code: HKD) is the currency of Hong Kong. It is the thirteenth most traded currency in the world.[2] The Hong Kong dollar is subdivided into 100 cents. It is also used in nearby Macau, where the official currency, the Macau pataca, is of similar value.[3]

To express prices in spoken Cantonese, for example $7.80, the phrase is 七個八 (Jyutping: cat1 go3 baat3; literally: "seven units and eight [tenths]"); in financial terms, where integer values in cents exist, e.g., $6.75, the phrase is 六個七毫半 (Jyutping: luk6 go3 cat1 hou4 bun3; literally: "six and seven ten cents half"; fives in cents is normally expressed as “half”, unless followed by another five, such as 55 cents when preceded by a dollar value); $7.08 is 七蚊零八仙 (Jyutping: cat1 man1 ling4 baat3 sin1; literally: "seven dollars zero eight cents").

In Hong Kong, the following are slang terms used to refer to various amounts of money:

Some of these terms are also used by overseas Chinese to refer their local currency.

A slang term in English sometimes used for the Hong Kong dollar is "Honkie".[4] 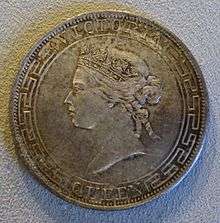 When Hong Kong was established as a free trading port in 1841,[5] there was no local currency in everyday circulation. Foreign currencies such as Indian rupees, Spanish and Mexican 8 reales, and Chinese cash coins circulated. Since 1825, it had been the policy of the British government to introduce sterling silver coinage to all of its colonies, and to this end, in 1845, the Spanish and Mexican 8 reales coins were set at a legal tender value of 4 shillings 2 pence sterling. But just as in the case of the British North American colonies, the attempts to introduce the sterling coinage failed to overcome the strong local adherence to the silver Spanish dollar system.

By 1858, London gave up all attempts to influence the currency situation in Canada, and, by the 1860s, it came to the same realisation in Hong Kong: that there was no point in trying to displace an already existing currency system. In 1863, the Royal Mint in London began issuing special subsidiary coinage for use in Hong Kong within the dollar system. In 1866, a local mint was established at Sugar Street in Causeway Bay on Hong Kong Island for the purpose of minting Hong Kong silver dollar and half dollar coins of the same value and similar likeness to their Mexican counterparts.

The Chinese did not however receive these new Hong Kong dollars well, and in 1868 the Hong Kong Mint was closed down with a loss of $440,000. The machinery at the Hong Kong mint was sold first to Jardine Matheson and in turn to the Japanese and used to make the first Yen coins in 1870. In the 1860s, banknotes of the new British colonial banks, the Hong Kong and Shanghai Banking Corporation and the Chartered Bank of India, Australia and China, denominated in dollars, also began to circulate in both Hong Kong and the wider region.

In 1873, the international silver crisis resulted in a devaluation of silver against gold-based currencies. Since the silver dollars in the USA and Canada were attached to a gold exchange standard, this meant that the silver dollars circulating along the China coast dropped in value as compared to the US dollar and the Canadian dollar.

By 1895, the circumstances had changed to the extent that there was now a dearth of Mexican dollars and the authorities in both Hong Kong and the Straits Settlements were putting pressure on the authorities in London to take measures to have a regular supply of silver dollar coins. London eventually acquiesced and legislation was enacted in attempts to regulate the coinage. New British trade dollars were coined at the mints in Calcutta and Bombay for use in both Hong Kong and the Straits Settlements.

In 1906, the Straits Settlements issued their own silver dollar coin and attached it to a gold sterling exchange standard at a fixed value of 2 shillings and 4 pence. This was the point of departure as between the Hong Kong unit and the Straits unit.

By 1935, only Hong Kong and China remained on the silver standard. In that year, Hong Kong, shortly after China, abandoned silver and introduced a crawling peg to sterling of £1 = $15.36 to $16.45. It was from this point in time that the concept of a Hong Kong dollar as a distinct unit of currency came into existence.

The One-Dollar Currency Note Ordinance of that year led to the introduction of one-dollar notes by the government and the government acknowledged the Hong Kong dollar as the local monetary unit. It was not until 1937 that the legal tender of Hong Kong was finally unified. In 1939, the dollar was put on a fixed peg of $16 = £1 ($1 = 1s 3d). 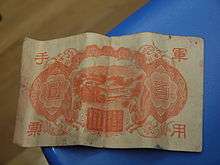 During the Japanese occupation, Japanese military yen were the only means of everyday exchange in Hong Kong. When the yen was first introduced on 26 December 1941, the exchange rate was ¥1 yen = $2. However, in August 1942, the rate was changed to 4 to 1. The yen became the only legal tender on 1 June 1943. The issue of local currency was resumed by the Hong Kong government and the authorised local banks after liberation, with the pre-war rate of $16 = £1 being restored. The yen was exchanged at a rate of ¥100 = $1. On 6 September 1945, all yen notes were declared void.

As of 18 May 2005, in addition to the lower guaranteed limit, a new upper guaranteed limit was set for the Hong Kong dollar at HK$7.75 to the American dollar. The lower limit has been lowered from 7.80 to 7.85 (by 100 pips per week from 23 May to 20 June 2005).[6] The Hong Kong Monetary Authority indicated this move is to narrow the gap between the interest rates in Hong Kong and those of the United States. A further aim of allowing the Hong Kong dollar to trade in a range is to avoid the HK dollar being used as a proxy for speculative bets on a renminbi revaluation.

The Basic Law of Hong Kong and the Sino-British Joint Declaration provides that Hong Kong retains full autonomy with respect to currency issuance. Currency in Hong Kong is issued by the government and three local banks under the supervision of the territory's de facto central bank, the Hong Kong Monetary Authority. Bank notes are printed by Hong Kong Note Printing Limited.

A bank can issue a Hong Kong dollar only if it has the equivalent exchange in US dollars on deposit. The currency board system ensures that Hong Kong's entire monetary base is backed with US dollars at the linked exchange rate. The resources for the backing are kept in Hong Kong's exchange fund, which is among the largest official reserves in the world. Hong Kong also has huge deposits of US dollars, with official foreign currency reserves of US$361 billion as of March 2016.[7]

Because the redesign was highly sensitive with regard to political and economic reasons, the designing process of the new coins could not be entrusted to an artist but was undertaken by Joseph Yam, Chief Executive of the Hong Kong Monetary Authority, himself who found in the bauhinia the requested "politically neutral design" and did a secret scissors and paste job.[8]

In 1997, to commemorate Hong Kong's transfer of sovereignty from Britain to the PRC, the government issued a new commemorative coin set which depicted Chinese cultural themes and Hong Kong's landmarks and 19 and 97 on each side of the designs.

The issue of Hong Kong dollar notes is governed today by the Hong Kong Monetary Authority (HKMA), the governmental currency board of Hong Kong. Under licence from the HKMA, three commercial banks issue their own banknotes for general circulation in the region. They are Hongkong and Shanghai Banking Corporation Limited; the Standard Chartered Bank (Hong Kong) Limited; and the Bank of China (Hong Kong) Limited. Notes are also issued by the HKMA itself. In most countries of the world the issue of banknotes is handled exclusively by a single central bank or government. The arrangements in Hong Kong are unusual but not unique; a comparable system is used in the United Kingdom, where seven banks issue banknotes.

In 1845, the first private bank, the Oriental Bank, was founded. However, banknotes were not produced until the 1860s, when the Oriental Bank, the Chartered Bank of India, Australia and China and the Hong Kong and Shanghai Banking Company began issuing notes. Denominations issued in the 1860s and 1870s included 1, 5, 10, 25, 50, 100 and 500 dollars. These notes were not accepted by the Treasury for payment of government dues and taxes, although they were accepted for use by merchants. 25 dollar notes did not survive beyond the end of the 19th century, whilst the 1-dollar notes (only produced by the HSBC) were issued until 1935.

Under the Currency Ordinance of 1935, banknotes in denominations of 5 dollars and above issued by the three authorised local banks, the Mercantile Bank of India Limited, the Chartered Bank of India, Australia and China and the Hong Kong and Shanghai Banking Corporation, were all declared legal tender. The government took over production of 1 dollar notes. In 1941, the government introduced notes for 1, 5 and 10 cents due to the difficulty of transporting coins to Hong Kong caused by the Second World War (a ship carrying 1941 1-cent coins was sunk, making this unissued coin very rare). Just before the Japanese occupation, an emergency issue of 1 dollar notes was made consisting of overprinted Bank of China 5 yuan notes.

After a less-than-successful trial from 1994 to 2002 to move the 10-dollar denomination from the banknote format (issued by the banks) to the coin format (Government-issued), 10 dollar banknotes are currently the only denomination issued by the HKMA, having acquired the note printing plant at Tai Po from the De La Rue Group of the UK on behalf of the Government. The older 10-dollar banknotes are, although rare and being phased out, still circulating.

A commemorative polymer ten dollar note was issued in July 2007 to commemorate the 10th anniversary of Hong Kong's return to China.[9] The new notes will circulate along with other issues for a trial period of two years, though the initial batch released was largely snapped up by collectors.[10][11]

The primary monetary policy objective of the Hong Kong Monetary Authority is to maintain exchange rate stability within the framework of the linked exchange rate system through sound management of the Exchange Fund, monetary operations and other means deemed necessary.

The important underpinnings of the linked exchange rate system include the strong official reserves of Hong Kong, a sound and robust banking system, fiscal prudence and a flexible economic structure.