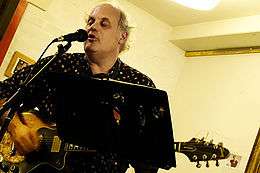 Eugene Chadbourne (born January 4, 1954) is an American improvisor, guitarist and banjoist. Highly eclectic and unconventional, Chadbourne's most formative influence is free jazz.[1] He has also been a reviewer for AllMusic and a contributor to Maximum RocknRoll.

Chadbourne was born in Mount Vernon, New York. He started out playing rock and roll guitar, but quickly grew bored with the form's conventions. He then studied other genres, including blues, country, bluegrass, free jazz, and noise—eventually synthesizing all those heterogeneous influences into a unique style of his own. He was also influenced early on by the experimental stylings of Captain Beefheart and The Mothers of Invention.

He fled to Canada from 1972-1977 to avoid service in the Vietnam War.[2] While there, he produced and hosted a radio program on Radio Radio 104.5 Cable FM in Calgary, Alberta. His show was notorious for obscure and remarkable music. Radio Radio is now the last quasi-pirate station in Canada. Around 1975, he founded Parachute Records to release some of his material.[2]

He returned to the United States and has resided in Greensboro, North Carolina since 1981.[3]

A notable solo album, Songs (Intakt 026: 1993), features politically oriented originals, such as "Knock on the Door" and "Hello Ceausescu", and covers, such as Nick Drake's "Thoughts of Mary Jane", and Floyd Tillman's "This Cold War With You".

Chadbourne invented an instrument known as the electric rake, made by attaching an electric guitar pickup to an ordinary lawn rake.[4] He plays a duet of electric rake and classical piano with Bob Wiseman on Wiseman's 1991 Presented By Lake Michigan Soda. He also played the instrument on the Sun Ra tribute album.