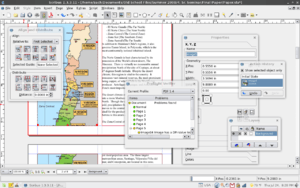 Desktop publishing (abbreviated DTP) is the creation of documents using page layout skills on a personal computer. Desktop publishing software can generate layouts and produce typographic quality text and images comparable to traditional typography and printing. This technology allows individuals, businesses, and other organizations to self-publish a wide range of printed matter. Desktop publishing is also the main reference for digital typography. When used skillfully, desktop publishing allows the user to produce a wide variety of materials, from menus to magazines and books, without the expense of commercial printing.

Desktop publishing combines a personal computer and WYSIWYG page layout software to create publication documents on a computer for either large scale publishing or small scale local multifunction peripheral output and distribution. Desktop publishing methods provide more control over design, layout, and typography than word processing. However, word processing software has evolved to include some, though by no means all, capabilities previously available only with professional printing or desktop publishing.

The same DTP skills and software used for common paper and book publishing are sometimes used to create graphics for point of sale displays, promotional items, trade show exhibits, retail package designs and outdoor signs. Although what is classified as "DTP software" is usually limited to print and PDF publications, DTP skills aren't limited to print. The content produced by desktop publishers may also be exported and used for electronic media. The job descriptions that include "DTP", such as DTP artist, often require skills using software for producing e-books, web content, and web pages, which may involve web design or user interface design for any graphical user interface.

Desktop publishing began in 1983 with a program developed by James Davise at a community newspaper in Philadelphia.[1] The program Type Processor One ran on a PC using a graphics card for a WYSIWYG display and was offered commercially by Best info in 1984.[2] (Desktop typesetting with only limited page makeup facilities had arrived in 1978–9 with the introduction of TeX, and was extended in the early 1980s by LaTeX.) The DTP market exploded in 1985 with the introduction in January of the Apple LaserWriter printer, and later in July with the introduction of PageMaker software from Aldus, which rapidly became the DTP industry standard software. Later on, Adobe PageMaker overtook Microsoft Word in professional DTP in 1985. The term "desktop publishing" is attributed to Aldus Corporation founder Paul Brainerd,[3] who sought a marketing catch-phrase to describe the small size and relative affordability of this suite of products, in contrast to the expensive commercial phototypesetting equipment of the day.

Before the advent of desktop publishing, the only option available to most people for producing typed documents (as opposed to handwritten documents) was a typewriter, which offered only a handful of typefaces (usually fixed-width) and one or two font sizes. Indeed, one popular desktop publishing book was entitled The Mac is not a typewriter.[4] The ability was revolutionary to create WYSIWYG page layouts on screen and then print pages containing text and graphical elements at crisp 300 dpi resolution for both the typesetting industry and the personal computer industry. Newspapers and other print publications made the move to DTP-based programs from older layout systems such as Atex and other programs in the early 1980s. By the standards of the 2010s, early 1980s desktop publishing was a primitive affair. Users of the PageMaker-LaserWriter-Macintosh 512K system endured frequent software crashes,[5] cramped display on the Mac's tiny 512 x 342 1-bit monochrome screen, the inability to control letter-spacing, kerning,[6] and other typographic features, and discrepancies between the screen display and printed output. However, it was a revolutionary combination at the time, and was received with considerable acclaim.

Behind-the-scenes technologies developed by Adobe Systems set the foundation for professional desktop publishing applications. The LaserWriter and LaserWriter Plus printers included high quality, scalable Adobe PostScript fonts built into their ROM memory. The LaserWriter's PostScript capability allowed publication designers to proof files on a local printer, then print the same file at DTP service bureaus using optical resolution 600+ ppi PostScript printers such as those from Linotronic. Later, the Macintosh II was released which was much more suitable for desktop publishing because of its greater expandability, support for large color multi-monitor displays, and its SCSI storage interface which allowed fast high-capacity hard drives to be attached to the system. Macintosh-based systems continued to dominate the market into 1986, when the GEM-based Ventura Publisher was introduced for MS-DOS computers. PageMaker's pasteboard metaphor closely simulated the process of creating layouts manually, but Ventura Publisher automated the layout process through its use of tags and style sheets and automatically generated indices and other body matter. This made it suitable for manuals and other long-format documents.

Desktop publishing moved into the home market in 1986 with Professional Page for the Amiga, Publishing Partner (now PageStream) for the Atari ST, GST's Timeworks Publisher on the PC and Atari ST, and Calamus for the Atari TT030. Software was published even for 8-bit computers like the Apple II and Commodore 64: Home Publisher, The Newsroom, and geoPublish. During its early years, desktop publishing acquired a bad reputation as a result of untrained users who created poorly organized, unprofessional-looking "ransom note effect" layouts; similar criticism was leveled again against early World Wide Web publishers a decade later. However, some desktop publishers who mastered the programs were able to realize truly professional results. Desktop publishing skills were considered of primary importance in career advancement in the 1980s, but increased accessibility to more user-friendly DTP software has made DTP a secondary skill to art direction, graphic design, multimedia development, marketing communications, and administrative careers. DTP skill levels range from what may be learned in a few hours (e.g., learning how to put clip art in a word processor) to what requires a college education. The discipline of DTP skills range from technical skills such as prepress production and programming to creative skills such as communication design and graphic image development.

There are two types of pages in desktop publishing, electronic pages and virtual paper pages to be printed on physical paper pages. All computerized documents are technically electronic, which are limited in size only by computer memory or computer data storage space. Virtual paper pages will ultimately be printed, and therefore require paper parameters that coincide with international standard physical paper sizes such as "A4, " "letter, " etc., if not custom sizes for trimming. Some desktop publishing programs allow custom sizes designated for large format printing used in posters, billboards and trade show displays. A virtual page for printing has a predesignated size of virtual printing material and can be viewed on a monitor in WYSIWYG format. Each page for printing has trim sizes (edge of paper) and a printable area if bleed printing is not possible as is the case with most desktop printers. A web page is an example of an electronic page that is not constrained by virtual paper parameters. Most electronic pages may be dynamically re-sized, causing either the content to scale in size with the page or causing the content to re-flow.

Master pages are templates used to automatically copy or link elements and graphic design styles to some or all the pages of a multipage document. Linked elements can be modified without having to change each instance of an element on pages that use the same element. Master pages can also be used to apply graphic design styles to automatic page numbering. Cascading Style Sheets can provide the same global formatting functions for web pages that master pages provide for virtual paper pages. Page layout is the process by which the elements are laid on the page orderly, aesthetically, and precisely. Main types of components to be laid out on a page include text, linked images that can only be modified as an external source, and embedded images that may be modified with the layout application software. Some embedded images are rendered in the application software, while others can be placed from an external source image file. Text may be keyed into the layout, placed, or (with database publishing applications) linked to an external source of text which allows multiple editors to develop a document at the same time. Graphic design styles such as color, transparency, and filters, may also be applied to layout elements. Typography styles may be applied to text automatically with style sheets. Some layout programs include style sheets for images in addition to text. Graphic styles for images may be border shapes, colors, transparency, filters, and a parameter designating the way text flows around the object called "wraparound" or "runaround. "

While desktop publishing software still provides extensive features necessary for print publishing, modern word processors now have publishing capabilities beyond those of many older DTP applications, blurring the line between word processing and desktop publishing. In the early days of graphical user interfaces in the early 1980s, DTP software was in a class of its own when compared to the fairly spartan word processing applications of the time. Programs such as WordPerfect and WordStar were still mainly text-based and offered little in the way of page layout, other than perhaps margins and line spacing. On the other hand, word processing software was necessary for features like indexing and spell checking, features that are common in many applications today. As computers and operating systems have become more powerful, versatile and user-friendly in the 2010s, vendors have sought to provide users with a single application platform that can meet almost all their publication needs.

With other electronic layout software

In 2010-era usage, DTP does not usually include digital tools such as TeX or troff, though both can easily be used on a modern desktop system and are standard with many Unix-like operating systems and readily available for other systems. The key difference between electronic typesetting software and DTP software is that DTP software is generally interactive and "What you see [onscreen] is what you get" (WYSIWYG) in design, while other electronic typesetting software, such as TeX, LaTeX and other variants, tend to operate in "batch mode", requiring the user to enter the processing program's markup language (e.g., Hyper Text Markup Language or "HTML") without immediate visualization of the finished product. This kind of "workflow" is less user-friendly than WYSIWYG, but more suitable for conference proceedings and scholarly articles as well as corporate newsletters or other applications where consistent, automated layout is important. In the 2010s, interactive front-end components of TeX, such as TeXworks or LyX have produced "what you see is what you mean" (WYSIWYM) hybrids of DTP and batch processing. These hybrids are focussed more on semantics than traditional DTP. There is some overlap between desktop publishing and what is known as Hypermedia publishing (i.e. Web design, Kiosk, CD-ROM). Many graphical HTML editors such as Microsoft FrontPage and Adobe Dreamweaver use a layout engine similar to a DTP program. However, some Web designers still prefer to write HTML without the assistance of a WYSIWYG editor, for greater control and ability to "fine-tune" the appearance and functionality. Another reason that some Web designers write in HTML is that WYSIWYG editors often result in excessive lines of code, leading to "code bloat" that can make the pages hard to troubleshoot.

An early (and comprehensive) reference book on the art of desktop publishing is Desktop Publishing For Everyone by K.S.V. Menon. This publication deals with virtually every facet of publishing and nearly all tools available at the time (2000). It is currently out of print.