For other uses, see Dihedral.

The upward tilt of the wings and tailplane of an aircraft, as seen on this Boeing 737, is called dihedral angle 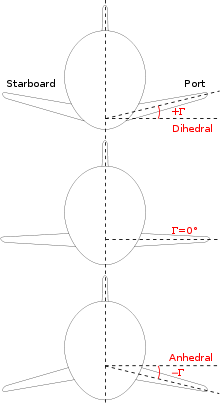 Schematic of dihedral and anhedral angle of an aircraft wing.

When the term "dihedral" (of an aircraft) is used by itself it is usually intended to mean "dihedral angle". However, context may otherwise indicate that "dihedral effect" is the intended meaning.

Dihedral Angle has important stabilizing effects on flying bodies because it has a strong influence on the dihedral effect.

The aerodynamic stabilizing qualities of a dihedral angle were described in an influential 1810 article by Sir George Cayley.[2]

In analysis of aircraft stability, the dihedral effect is also a stability derivative called Cl

The purpose of dihedral effect is to contribute to stability in the roll axis. It is an important factor in the stability of the spiral mode which is sometimes called "roll stability".[note 3] The dihedral effect does not contribute directly to the restoring of "wings level", but it indirectly helps restore "wings level" through its effect on the spiral mode of motion described below.

Aircraft designers may increase dihedral angle to provide greater clearance between the wing tips and the runway. This is of particular concern with swept-wing aircraft, whose wingtips could hit the runway on rotation/touchdown. In military aircraft dihedral angle space may be used for mounting materiel and drop-tanks on wing hard points, especially in aircraft with low wings. The increased dihedral effect caused by this design choice may need to be compensated for, perhaps by decreasing the dihedral angle on the horizontal tail.

Dihedral effect is defined simply to be the rolling moment caused by sideslip and nothing else. Rolling moments caused by other things that may be related to sideslip have different names.

Fig. 1: Uncompensated lift component produces a side force Fy, which causes the aircraft to sideslip.

If a disturbance causes an aircraft to roll away from its normal wings-level position as in Figure 1, the aircraft will begin to move somewhat sideways toward the lower wing.[3] In Figure 2, the airplane's flight path has started to move toward its left while the nose of the airplane is still pointing in the original direction. This means that the oncoming air is arriving somewhat from the left of the nose. The airplane now has sideslip angle in addition to the bank angle. Figure 2 shows the airplane as it presents itself to the oncoming air.

The spiral mode is the tendency to slowly diverge from, or the tendency to slowly return to wings level. If the spiral mode is stable, the aircraft will slowly return to wings-level, if it is unstable, the aircraft will slowly diverge from wings-level. Dihedral effect and yaw stability are the two primary factors that affect the stability of the spiral mode, although there are other factors that affect it less strongly.

Other factors contributing to dihedral effect 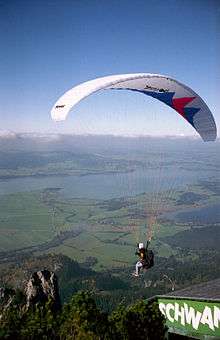 The CG of a paraglider is very low, making a strong contribution to dihedral effect.

Factors of design other than dihedral angle also contribute to dihedral effect. Each increases or decreases total aircraft dihedral effect to a greater or lesser degree.

Wing sweepback also increases dihedral effect. This is one reason for anhedral configuration on aircraft with high sweep angle, as well as on some airliners, even on low-wing aircraft such as the Tu-134 and Tu-154, with the small German 1930s-1945 biplanes of the Bücker Flugzeugbau, the Bucker Jungmann two-seat trainer and more famous Bücker Jungmeister aerobatic competition biplane, both having approximately 11º of wing sweepback giving both designs a degree of dihedral effect, beyond the small amount of dihedral both biplanes' designs also featured.

Vertical position of the center of mass

The center of mass, usually called the center of gravity or "CG", is the balance point of an aircraft. If suspended at this point and allowed to rotate, a body (aircraft) will be balanced. The front-to-back location of the CG is of primary importance for the general stability of the aircraft, but the vertical location has important effects as well.

The vertical location of the CG changes the amount of dihedral effect. As the "vertical CG" moves lower, dihedral effect increases. This is caused by the center of lift and drag being further above the CG and having a longer moment arm. So, the same forces that change as sideslip changes (primarily sideforce, but also lift and drag) produce a larger moment about the CG of the aircraft. This is sometimes referred to as the pendulum effect.[note 5]

Effects of too much dihedral effect

A side effect of too much dihedral effect, caused by excessive dihedral angle among other things, can be yaw-roll coupling (a tendency for an aircraft to Dutch roll). This can be unpleasant to experience, or in extreme conditions it can lead to loss of control or can overstress an aircraft.

Anhedral on the wings and tailplane of an RAF Harrier GR7A

Military fighter aircraft often have near zero or even anhedral angle reducing dihedral effect and hence reducing the stability of the spiral mode. This increases maneuverability which is desirable in fighter-type aircraft.

Anhedral angles are also seen on aircraft with a high mounted wing, such as the very large Antonov An-124 and Lockheed Galaxy cargo aircraft. In such designs, the high mounted wing is above the aircraft's center of gravity which confers extra dihedral effect due to the pendulum effect (also called the keel effect) and so additional dihedral angle is often not required. Such designs can have excessive dihedral effect and so be excessively stable in the spiral mode, so anhedral angle on the wing is added to cancel out some of the dihedral effect so that the aircraft can be more easily maneuvered.

Most aircraft have been designed with planar wings with simple dihedral (or anhedral). Some older aircraft such as the Vought F4U Corsair and the Beriev Be-12 were designed with gull wings bent near the root. Modern polyhedral wing designs generally cant upwards near the wingtips (also known as tip dihedral), increasing dihedral effect without increasing the angle the wings meet at the root, which may be restricted to meet other design criteria.

Polyhedral is seen on gliders and some other aircraft. The McDonnell Douglas F-4 Phantom II is one such example, unique among jet fighters for having dihedral wingtips. This was added after flight testing of the flat winged prototype showed the need to correct some unanticipated spiral mode instability - angling the wingtips, which were already designed to fold up for carrier operations, was a more practical solution than re-engineering the entire wing.[4]