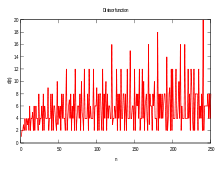 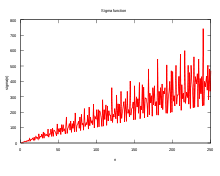 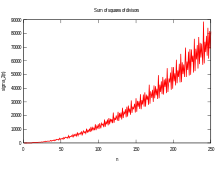 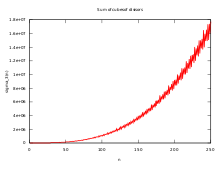 In mathematics, and specifically in number theory, a divisor function is an arithmetic function related to the divisors of an integer. When referred to as the divisor function, it counts the number of divisors of an integer. It appears in a number of remarkable identities, including relationships on the Riemann zeta function and the Eisenstein series of modular forms. Divisor functions were studied by Ramanujan, who gave a number of important congruences and identities; these are treated separately in the article Ramanujan's sum.

A related function is the divisor summatory function, which, as the name implies, is a sum over the divisor function.

The aliquot sum s(n) of n is the sum of the proper divisors (that is, the divisors excluding n itself,

A001065), and equals σ1(n) − n; the aliquot sequence of n is formed by repeatedly applying the aliquot sum function.

and the aliquot sum s(12) of proper divisors is:

For a non-square integer, n, every divisor, d, of n is paired with divisor n/d of n and

is even; for a square integer, one divisor (namely

) is not paired with a distinct divisor and

is odd. Similarly, the number

is odd if and only if n is a square or twice a square.

For a prime number p,

because by definition, the factors of a prime number are 1 and itself. Also, where pn# denotes the primorial,

since n prime factors allow a sequence of binary selection (

or 1) from n terms for each proper divisor formed.

where r = ω(n) is the number of distinct prime factors of n, pi is the ith prime factor, and ai is the maximum power of pi by which n is divisible, then we have

which is equivalent to the useful formula:

We also note s(n) = σ(n) − n. Here s(n) denotes the sum of the proper divisors of n, that is, the divisors of n excluding n itself. This function is the one used to recognize perfect numbers which are the n for which s(n) = n. If s(n) > n then n is an abundant number and if s(n) < n then n is a deficient number.

As an example, for two distinct primes p and q with p < q, let

where φ(n) is Euler's totient function.

Then, the roots of:

allow us to express p and q in terms of σ(n) and φ(n) only, without even knowing n or p+q, as:

In 1984, Roger Heath-Brown proved that the equality

is true for an infinity of values of n.

A Lambert series involving the divisor function is:

for arbitrary complex |q| ≤ 1 and a. This summation also appears as the Fourier series of the Eisenstein series and the invariants of the Weierstrass elliptic functions.

On the other hand, since there are infinitely many prime numbers,

in this formula is known as Dirichlet's divisor problem

where lim sup is the limit superior. This result is Grönwall's theorem, published in 1913 (Grönwall 1913). His proof uses Mertens' 3rd theorem, which says that

where p denotes a prime.

In 1915, Ramanujan proved that under the assumption of the Riemann hypothesis, the inequality:

A related bound was given by Jeffrey Lagarias in 2002, who proved that the Riemann hypothesis is equivalent to the statement that

for every natural number n > 1, where