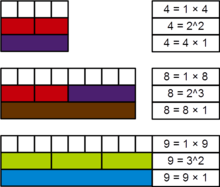 Demonstration, with Cuisenaire rods, of the perfect power nature of 4, 8, and 9

A sequence of perfect powers can be generated by iterating through the possible values for m and k. The first few ascending perfect powers in numerical order (showing duplicate powers) are (sequence A072103 in the OEIS):

The sum of the reciprocals of the perfect powers (including duplicates) is 1:

which can be proved as follows:

The first perfect powers without duplicates are:

The sum of the reciprocals of the perfect powers p without duplicates is:[1]

where μ(k) is the Möbius function and ζ(k) is the Riemann zeta function.

According to Euler, Goldbach showed (in a now lost letter) that the sum of 1/(p−1) over the set of perfect powers p, excluding 1 and excluding duplicates, is 1:

This is sometimes known as the Goldbach-Euler theorem.

Detecting whether or not a given natural number n is a perfect power may be accomplished in many different ways, with varying levels of complexity. One of the simplest such methods is to consider all possible values for k across each of the divisors of n, up to

. So if the divisors of

then one of the values

must be equal to n if n is indeed a perfect power.

This method can immediately be simplified by instead considering only prime values of k. This is because if

where p is prime, then this can simply be rewritten as

. Because of this result, the minimal value of k must necessarily be prime.

If the full factorization of n is known, say

are distinct primes, then n is a perfect power if and only if

In 2002 Romanian mathematician Preda Mihăilescu proved that the only pair of consecutive perfect powers is 23 = 8 and 32 = 9, thus proving Catalan's conjecture.

Pillai's conjecture states that for any given positive integer k there are only a finite number of pairs of perfect powers whose difference is k. This is an unsolved problem.[2]

Calculation by recursion for positive integers

As an alternate way to calculate perfect powers, the recursive approach has yet to be found useful. It is based on the observation that the difference between ab and (a+1)b where

Define the following function on the range of positive integers:

This function generates the following output:

Also define the following function on the range of positive integers: (This is very closely related to the Binomial Theorem and Pascal's Triangle)

It can then be stated that:

This calculation method can be used for all integer power calculations, as negative integers act the same way, simply applying the negative if the exponent is odd.