In species such as this Cornus unalaschkensis, the tiny four-petaled flowers are clustered in a tightly packed, flattened cyme at the center of four showy white petal-like bracts. 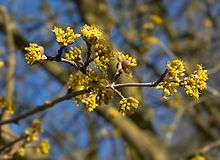 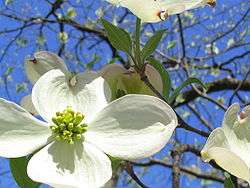 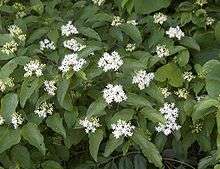 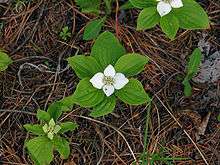 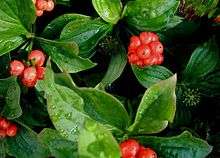 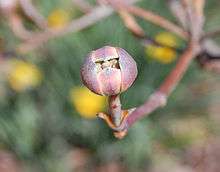 Cornus is a genus of about 30–60 species[Note 1] of woody plants in the family Cornaceae, commonly known as dogwoods, which can generally be distinguished by their blossoms, berries, and distinctive bark.[2] Most are deciduous trees or shrubs, but a few species are nearly herbaceous perennial subshrubs, and a few of the woody species are evergreen. Several species have small heads of inconspicuous flowers surrounded by an involucre of large, typically white petal-like bracts, while others have more open clusters of petal-bearing flowers. The various species of dogwood are native throughout much of temperate and boreal Eurasia and North America, with China and Japan and the southeastern United States particularly rich in native species.

Depending on botanical interpretation, the dogwoods are variously divided into one to nine genera or subgenera; a broadly inclusive genus Cornus is accepted here.

The name "dog-tree" entered the English vocabulary before 1548, becoming "dogwood" by 1614. Once the name dogwood was affixed to this kind of tree, it soon acquired a secondary name as the Hound's Tree, while the fruits came to be known as dogberries or houndberries (the latter a name also for the berries of black nightshade, alluding to Hecate's hounds). Another theory advances the view that "dogwood" was derived from the Old English dagwood, from the use of the slender stems of its very hard wood for making "dags" (daggers, skewers, and arrows).[3][4] Another, earlier name of the dogwood in English is the whipple-tree. Geoffrey Chaucer uses "whippletree" in The Canterbury Tales ("The Knight's Tale", verse 2065) to refer to the dogwood. A whippletree is an element of the traction of a horse-drawn cart, linking the drawpole of the cart to the harnesses of the horses in file; these items still bear the name of the tree from which they are commonly carved.

Dogwoods have simple, untoothed leaves with the veins curving distinctively as they approach the leaf margins. Most dogwood species have opposite leaves, while a few, such as Cornus alternifolia and C. controversa, have their leaves alternate. Dogwood flowers have four parts. In many species, the flowers are borne separately in open (but often dense) clusters, while in various other species (such as the flowering dogwood), the flowers themselves are tightly clustered, lacking showy petals, but surrounded by four to six large, typically white petal-like bracts.

The fruits of all dogwood species are drupes with one or two seeds, often brightly colorful. The drupes of species in the subgenera Cornus are edible. Many are without much flavor. Cornus kousa and Cornus mas are sold commercially as edible fruit trees. The fruits of Cornus kousa have a sweet, tropical pudding like flavor in addition to hard pits. The fruits of Cornus mas are both tart and sweet when completely ripe. They have been eaten in Eastern Europe for centuries, both as food and medicine to fight colds and flus. They are very high in vitamin C. However, those of species in subgenus Swida are mildly toxic to people, though readily eaten by birds.

Dogwoods are used as food plants by the larvae of some species of butterflies and moths, including the Emperor moth, the Engrailed, the small angle shades, and the following case-bearers of the genus Coleophora: C. ahenella, C. salicivorella (recorded on Cornus canadensis), C. albiantennaella, C. cornella and C. cornivorella, with the latter three all feeding exclusively on Cornus.

Dogwoods are widely planted horticulturally, and the dense wood of the larger-stemmed species is valued for certain specialized purposes. Cutting boards and other fine turnings can be made from this fine grained and beautiful wood. Over 32 different varieties of game birds, including quail, feed on the red seeds.[5]

The Dogwood flower motif was adopted as British Columbia's provincial flower in 1956. Actually a flowering tree, the Pacific Dogwood is known for its white blooms, brilliant red berries and bright foliage in the fall. It stands about eight to ten metres high, and blossoms in April and May.

Various species of Cornus, particularly the flowering dogwood (Cornus florida), are ubiquitous in American gardens and landscaping; horticulturist Donald Wyman stated, "There is a dogwood for almost every part of the U.S. except the hottest and driest areas".[6] In contrast, in England the lack of sharp winters and hot summers makes Cornus florida very shy of flowering.[7]

Other Cornus species are stoloniferous shrubs that grow naturally in wet habitats and along waterways. Several of these are used along highways and in naturalizing landscape plantings, especially those species with bright red or bright yellow stems, particularly conspicuous in winter, such as Cornus stolonifera.

The species Cornus mas is commonly cultivated in southeastern Europe for its edible berries, which can be turned into jam, fermented into a wine, or eaten raw after slight bletting.

Dense and fine-grained, dogwood timber has a density of 0.79 and is highly prized for making loom shuttles, tool handles, roller skates and other small items that require a very hard and strong wood.[8] Though it is tough for woodworking, some artisans favor dogwood for small projects such as walking canes, arrow making, mountain dulcimers and fine inlays. Dogwood wood is an excellent substitute for persimmon wood in the heads of certain golf clubs ("woods"). Dogwood lumber is rare in that it is not readily available with any manufacturer and must be cut down by the person(s) wanting to use it.

Larger items have also been occasionally made of dogwood, such as the screw-in basket-style wine or fruit presses. The first kinds of laminated tennis rackets were also made from this wood, cut into thin strips.

Dogwood twigs were used by pioneers to brush their teeth. They would peel off the bark, bite the twig and then scrub their teeth.[9]

The bark of Cornus species is rich in tannin and has been used as a substitute for quinine.[10] During the American civil war confederate soldiers would make a tea from the bark to treat pain and fevers, and dogwood leaves in a poultice to cover wounds.[11]

The Japanese Cornel, C. officinalis, is used extensively in traditional Chinese medicine as "shān zhū yú," (山茱萸) where it is used for weakness, dizziness, pain of the lower back and knees, and to astringe excessive sweating, uterine bleeding, and bladder incontinence.[12]

The following classification recognizes a single, inclusive genus Cornus,[13][14] with four subgroups and ten subgenera supported by molecular phylogeny.[15][16] Geographical ranges as native plants are given below. In addition, cultivated species occasionally persist or spread from plantings beyond their native ranges, but are rarely if ever locally invasive.[Note 2]

The poet Virgil makes reference to a haunted copse of cornel and myrtle in Book III of the Aeneid. The hero Aeneas attempts to break off boughs to decorate an altar, but instead the wood drips with black blood.[22] Anne Morrow Lindbergh gives a vivid description of the dogwood tree in her poem "Dogwood".[23]

A Christian legend of unknown origin proclaims that the cross used to crucify Jesus was constructed of dogwood.[24] As the story goes, during the time of Jesus, the dogwood was larger and stronger than it is today and was the largest tree in the area of Jerusalem. After His Crucifixion, Jesus changed the plant to its current form: He shortened it and twisted its branches to assure an end to its use for the construction of crosses.[25] He also transformed its inflorescence into a representation of the Crucifixion itself, with the four white bracts cross-shaped representing the four corners of the Cross, each bearing a rusty indentation as of a nail, the red stamens of the flower representing Jesus' Crown of Thorns, and the clustered red fruit representing His Blood.[26][27]

In the Victorian Era, flowers or sprigs of dogwood were presented to unmarried women by male suitors to signify affection. The returning of the flower conveyed indifference on the part of the woman; if she kept it, it became a sign of mutual interest.

The term "dogwood winter", in colloquial use in the American Southeast, is sometimes used to describe a cold snap in spring, presumably because farmers believed it was not safe to plant their crops until after the dogwoods blossomed.[28]