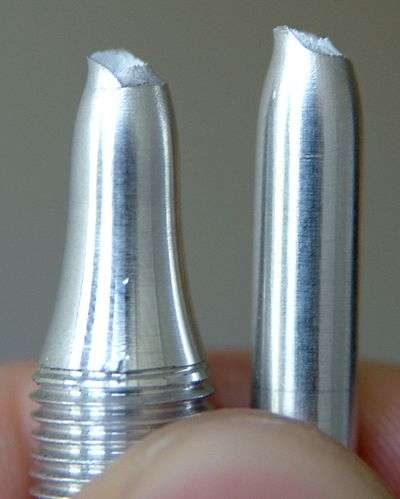 Tensile test of an AlMgSi alloy. The local necking and the cup and cone fracture surfaces are typical for ductile metals. 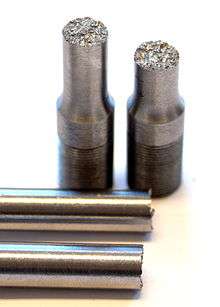 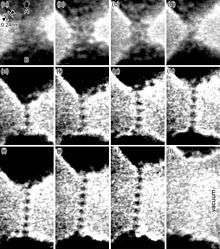 Gold is extremely ductile. It can be drawn into a monoatomic wire, and then stretched about twice before it breaks.[3]

Ductility is especially important in metalworking, as materials that crack, break or shatter under stress cannot be manipulated using metal-forming processes such as hammering, rolling, and drawing. Malleable materials can be formed cold using stamping or pressing, whereas brittle materials may be cast or thermoformed.

High degrees of ductility occur due to metallic bonds, which are found predominantly in metals and leads to the common perception that metals are ductile in general. In metallic bonds valence shell electrons are delocalized and shared between many atoms. The delocalized electrons allow metal atoms to slide past one another without being subjected to strong repulsive forces that would cause other materials to shatter.

Ductility can be quantified by the fracture strain

, which is the engineering strain at which a test specimen fractures during a uniaxial tensile test. Another commonly used measure is the reduction of area at fracture

.[4] The ductility of steel varies depending on the alloying constituents. Increasing levels of carbon decrease ductility. Many plastics and amorphous solids, such as Play-Doh, are also malleable. The most ductile metal is platinum and the most malleable metal is gold.[5][6] 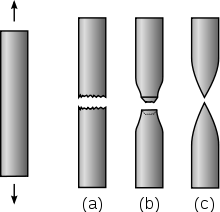 In some materials the transition is sharper than others and typically requires a temperature-sensitive deformation mechanism. For example, in materials with a body-centered cubic (bcc) lattice the DBTT is readily apparent, as the motion of screw dislocations is very temperature sensitive because the rearrangement of the dislocation core prior to slip requires thermal activation. This can be problematic for steels with a high ferrite content. This famously resulted in serious hull cracking in Liberty ships in colder waters during World War II, causing many sinkings. DBTT can also be influenced by external factors such as neutron radiation, which leads to an increase in internal lattice defects and a corresponding decrease in ductility and increase in DBTT.

The most accurate method of measuring the DBTT of a material is by fracture testing. Typically four point bend testing at a range of temperatures is performed on pre-cracked bars of polished material.