East London (Afrikaans: Oos-Londen,[3] Xhosa: eMonti) is a city on the southeast coast of South Africa[4] in the Buffalo City Metropolitan Municipality of the Eastern Cape province. The city lies on the Indian Ocean coast, largely between the Buffalo River and the Nahoon River, and hosts the country's only river port. East London today has a population of over 267,000 with over 755,000 in the metropolitan area.[5]

Lieutenant John Bailie of the Royal Navy, one of the 1820 Settlers, surveyed the Buffalo River mouth and founded the town in 1836, a memorial on Signal Hill commemorating the event.[6] The city formed around the only river port in South Africa and was originally known as Port Rex. This settlement on the West Bank was the nucleus of the town of East London, which was elevated to city status in 1914.

During the early to mid-19th century frontier wars between the British settlers and the local Xhosa inhabitants, East London served as a supply port to service the military headquarters at nearby King William's Town, about 50 kilometres (31 mi) away. A British fort, Fort Glamorgan, was built on the West Bank in 1847, and annexed to the Cape Colony that same year. This fort is one of a series of British-built forts, including Fort Murray, Fort White, Fort Cox, Fort Hare and Fort Beaufort, in the border area that became known as British Kaffraria.

With later development of the port came the settlement of permanent residents, including German settlers, most of whom were bachelors. These settlers were responsible for German names of some towns in the vicinity of East London such as Stutterheim and Berlin. Today, German surnames such as Gehring, Salzwedel and Peinke are still common in East London, but the descendants of the settlers rapidly became Anglicised.

The existing port, in the mouth of the Buffalo River, adjoining the Indian Ocean, began operating in 1870. In 1872, the Cape Colony, under the leadership of its first Prime Minister John Molteno, attained a degree of independence from Britain. The new government merged the three neighbouring settlements of East London, East London East and Panmure in 1873, forming the core of the current municipality, and in 1876 it began construction on the region's railway lines, commencing on the river's east bank. At the same time, it began construction of the East London harbour. This new infrastructure rapidly accelerated development of the area, into today's thriving city of East London.[7][8]

The unusual double-decker bridge over the Buffalo River was completed in 1935 and to this day, is the only bridge of its type in South Africa. Modern day attractions include the East London Museum housing the coelacanth, a prehistoric fish, thought to be extinct, discovered live at Chalumna (Tyolomnqa) Mouth near East London by fishermen in 1938, and numerous memorial statues. The city is well known as a surfing haven, and its beaches are among the best in the country.

In 1961, areas on either side of East London were declared Bantu homelands. Ciskei to the west and Transkei to the East. East London found itself almost surrounded except to the north and became very unsettled during the Apartheid era. The editor of the local newspaper, the Daily Dispatch, was Donald Woods, who broke the story of the murder of Steve Biko, a Pan Africanist leader and author of the book I Write What I Like, at the hands of South African Security Police in Port Elizabeth, in September 1977. The story of Donald Woods was recorded in the Hollywood film Cry Freedom. A prominent statue of Biko now stands outside the East London City Hall.

The period of international sanctions that followed in the 1980s damaged the economy of East London's harbour. Enormous investment in recent years, by corporations such as Daimler Chrysler, has resulted in the harbour being developed to include a new car terminal.

In 2000, East London became part of Buffalo City Metropolitan Municipality, also consisting of King William's Town, Bhisho and Mdantsane and is the seat of the Metro.

East London is the second largest industrial centre in the province. The motor industry is the dominant employer. A major Daimler plant is located next to the harbour, manufacturing Mercedes-Benz and other vehicles for the local market, as well as exporting to the United States and Brazil. Other industries include clothing, textiles, pharmaceuticals and food processing.

From the 1960s until the 1990s, the apartheid government created tax and wage incentives to attract industries to the then black "independent states", including nearby Ciskei. Investment thus flowed into surrounding areas such as Fort Jackson and Dimbaza, leaving East London in relative isolation. The militant labour union activity of the time was not conducive to productivity or good labour relations. Transport infrastructure deteriorated and port activity wound down.

To encourage investment in East London, the East London Industrial Development Zone (IDZ) was established on the West Bank in 2004, close to both the port and airport. 1500ha of land has been made available, and the site is one of four duty-free development areas in South Africa.

East London has good transport links with the rest of South Africa. The N2 highway connecting Cape Town and Durban bypasses the city, while the N6 highway joins East London with the inland city of Bloemfontein (as well as, via the N1, Johannesburg). East London Airport, 10 km from the city centre, has daily flights to all major South African cities.

Cricket is very popular around East London. A combined Border/Eastern Province cricket side known as the Warriors take part in the top provincial competition. Former Proteas wicketkeeper Mark Boucher who currently holds the Test Record for most dismissals by a wicketkeeper hails from East London. Buffalo Park Stadium in East London hosted a match during the ICC Cricket World Cup in 2003 and two matches of the 2009 Indian Premier League.

The Buffalo Road Running Club of East London has created two established events that have gained international recognition. They are the Old Mutual Buffalo 42,2 km marathon, which is held in February/March each year, and South Africa's oldest 160 km extreme ultra marathon, the Washie, over a picturesque and undulating coastal route from Port Alfred to the city.

Triathlon is a popular sport and in particular the world-famous Ironman 70.3 South African event that takes place annually in January. Ironman 70.3 consists of a 1.9 km swim, 90 km of cycling and a 21.1 km road run. The event starts and finishes at Orient Beach in East London.

Rugby is popular in East London. The provincial team, the Border Bulldogs, currently plays in the First Division of the Currie Cup competition. Most national games in East London are played at the Buffalo City Stadium, which holds around 15000 people and was a host stadium during the 1995 Rugby World Cup. East London schools have produced many fine rugby players, including (in recent times) André Vos, Keith and Mark Andrews, Christiaan Scholtz, Brent Russell, Rory Kockott, Akona Ndungane and Odwa Ndungane.

Football is also very popular in the city. East London is home to Blackburn Rovers, a football club competing in the National First Division. The team plays at Buffalo City Stadium.

Motocross is also popular and many national events are held in the area surrounding East London, due to the challenging terrain there and in Transkei. East London is home to the ELMCC (East London Motor Cycle Club), which organises most of the motorcycle events in the area.

East London is home to the Prince George Race Circuit, opened in 1959 (renamed East London Grand Prix Circuit), a historic motor racing track that hosted three Formula One South African Grand Prix during the 1930s and 1960s. The circuit is run and managed by Border Motor Sport Club on a shoestring budget. South Africa's only Formula One World Drivers' Champion, Jody Scheckter, started his motor racing career with a Renault Gordini on this track.

Martial arts are also very popular, with numerous clubs available for training in aikido, judo, karate, t'ai chi and many other forms of martial arts. The East London Aikido Club is taught by a 3rd dan local instructor who has trained under a number of international instructors in South Africa and overseas. Club members of the East London Aikido Club regularly represent their club at national aikido events. Fort Hare Karate and East London Goju Kai have also hosted many memorable events and training weekends. 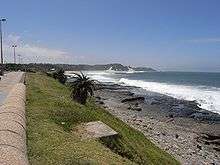 East London has a borderline humid subtropical climate (Köppen Cfa/Cfb), with the warm temperatures and moderation typical of the South African coastline. Although it has no true dry season, there is a drying trend in the winter, with the wettest times of year being "spring" and "autumn". There is also a shorter and lesser dry period in December and January. The all-time record low is 3 °C (37.4 °F), and the all-time record high is 42 °C (107.6 °F). The hottest temperatures have been recorded in springtime, rather than the summer months. Temperatures above 38 °C (100 °F) have only been recorded early in the season, from August to December. Although temperatures have never dropped below freezing since records began, East London has recorded snowfall in 1985 and 1989.[10]

East London is serviced by two national roads: the coastal N2 highway connects it to King William's Town, Port Elizabeth and Cape Town to the west and Mthatha and Durban to the east. It is the southern end of the N6, which runs north via Queenstown and Aliwal North to Bloemfontein. Older sections of the N2 have been renumbered the R102. The R72 is an alternative route to Port Elizabeth, via Port Alfred. The R346 is an alternative route to King William's Town. East London, like South Africa's other major cities, uses Metropolitan (or M) routes as a third tier for its major intra-city roads.

East London Airport is a commercial airport with service to other large South African metropolitan areas.

The East London municipality assumed a coat of arms on 29 August 1892.[13][14] The arms were : Argent, a cross Gules between in the first and fourth quarters a garb and in the second and third quarters a fleece Or; on a chief Azure a demi-sun Or. A golden anchor was placed behind the shield, no doubt to show that the town was a seaport. The motto was Animo et fide.

The arms were improved in the 1950s by the town clerk, H.H. Driffield. He changed the shield from silver to ermine, removed the anchor and devised a crest consisting of two crossed anchors and a mural crown. Heraldist Ivan Mitford-Barberton added two buffalo as supporters.[15] The improved design was granted by the College of Arms on 15 December 1959. It was registered with the Cape Provincial Administration in 1960,[16] and at the Bureau of Heraldry in 1967.[17]