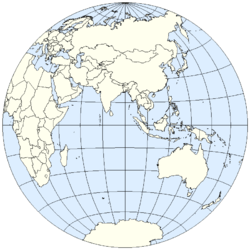 The Eastern Hemisphere is a geographical term for the half of the earth that is east of the prime meridian (which crosses Greenwich, England) and west of the antimeridian.[1] It is also used to refer to Europe, Asia, Africa, and Australia, in contrast with the Western Hemisphere, which includes North and South America. This hemisphere may also be called the "Oriental Hemisphere". In addition, it may be used in a cultural or geopolitical sense as a synonym for the "Old World".

The line demarcating the Eastern and Western Hemispheres is an arbitrary convention, unlike the Equator (an imaginary line encircling the earth, equidistant from its poles) which divides the Northern and Southern Hemispheres. The prime meridian at 0° longitude and the antimeridian, at 180° longitude are the conventionally accepted boundaries, since they divide eastern longitudes from western longitudes. This convention was established in 1884 at the International Meridian Conference held in Washington, D.C. where the standard time concepts of Canadian railroad engineer Sir Sandford Fleming were adopted. Using this demarcation puts portions of Western Europe, Africa and eastern Russia in the Western Hemisphere, thereby diluting its usefulness as a geopolitical construct, since all of Eurasia and Africa are typically included in the Eastern Hemisphere. Consequently, the meridians of 20°W and the diametrically opposed 160°E are often used,[2][3] which includes all of the European and African mainlands, but also includes a small portion of northeast Greenland (typically reckoned as part of North America) and excludes more of eastern Russia and Oceania (e.g., New Zealand). Prior to the global adoption of standard time, numerous prime meridians were decreed by various countries where time was defined by local noon (thereby, local meridian).

The center of the Eastern Hemisphere is located in the Indian Ocean at the intersection of the equator and the 90th meridian east, 910km west of Indonesia in the Ninety East Ridge.