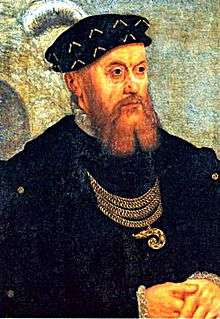 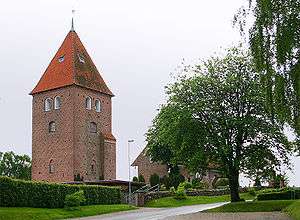 St. Søren's Church in Old Rye was the setting of the election.

The election of Christian III as king of Denmark and Norway on 4 July 1534 was a landmark event for all of Denmark and Norway. It took place in the church in the town of Rye, eastern Jutland, where the Jutlandic nobility elected Prince Christian, son of King Frederick I and Duke of Slesvig and Holsten, as king. This brought about the Count's Feud (Grevens Fejde) and later also led to the implementation of the Protestant Reformation in Denmark and Norway. [1]

Christian was a zealous Protestant who had witnessed the defence of Martin Luther at the Diet of Worms, and he had already carried out the Reformation in the Duchies of Slesvig and Holsten. Christian's views made it difficult to gain the support of a majority of the Council of the Realm as most noblemen and, of course, the bishops would rather see a Roman Catholic king on the throne and hence preferred his younger brother. [2]

Among the supporters of Christian were Mogens Gøye, Steward of the Realm. Mogens Gøye was a Danish statesman and the Royal councillor of several Danish Kings. Gøye was among the originators of the meeting in Rye Church between eight Jutlandic members of the Council and the four Jutlandic bishops. [3]

Members of the lesser nobility had also turned up – presumably on Mogens Gøye's initiative – but had to stay outside the church. The lengthy discussion about the election eventually made them lose patience, and they forced their way into the church and demanded to know who opposed the election of Prince Christian. After that, the opponents finally gave up. Bishop Bille of Aarhus wept when he signed the request for the Protestant Duke to become king, realising that it would mean his own downfall. [4]

Although hesitant, Christian accepted the election and was cheered at a meeting in Horsens on 18 August 1534, where he declared that he would, like his predecessors, sign a håndfæstning (charter), although with a reform of ecclesiastical affairs, i.e. the implementation of the Protestant Reformation in Denmark and Norway.[5]

This article is issued from Wikipedia - version of the 4/26/2015. The text is available under the Creative Commons Attribution/Share Alike but additional terms may apply for the media files.