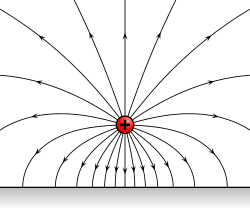 , at a given point is defined as the (vectorial) force,

, that would be exerted on a stationary test particle of unit charge by electromagnetic forces (i.e. the Lorentz force). A particle of charge

would be subject to a force

In the special case of a steady state (stationary charges and currents), the Maxwell-Faraday inductive effect disappears. The resulting two equations (Gauss's law

and Faraday's law with no induction term

), taken together, are equivalent to Coulomb's law, written as

for a charge density

denotes the position in space). Notice that

, the permittivity of vacuum, must be substituted if charges are considered in non-empty media.

The equations of electromagnetism are best described in a continuous description. However, charges are sometimes best described as discrete points; for example, some models may describe electrons as point sources where charge density is infinite on an infinitesimal section of space.

can be described mathematically as a charge density

, where the Dirac delta function (in three dimensions) is used. Conversely, a charge distribution can be approximated by many small point charges.

Electric fields satisfy the superposition principle, because Maxwell's equations are linear. As a result, if

are the electric fields resulting from distribution of charges

, a distribution of charges

will create an electric field

; for instance, Coulomb's law is linear in charge density as well.

This principle is useful to calculate the field created by multiple point charges. If charges

are stationary in space at

, in the absence of currents, the superposition principle proves that the resulting field is the sum of fields generated by each particle as described by Coulomb's law: 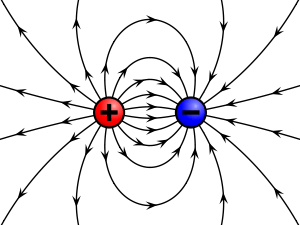 Illustration of the electric field surrounding a positive (red) and a negative (blue) charge. 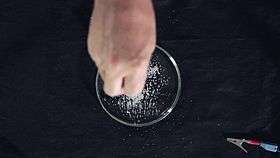 Experiment illustrating electric field lines. An electrode connected to an electrostatic induction machine is placed in an oil-filled container. Considering that oil is a dielectric medium, when current is ran through the electrode, the particles arrange themselves so as to show the force lines of the electric field. Performed by Prof. Oliver Zajkov at the Physics Institute at the Ss. Cyril and Methodius University of Skopje, Macedonia.

Electrostatic fields are E-fields which do not change with time, which happens when charges and currents are stationary. In that case, Coulomb's law fully describes the field.

If a system is static, such that magnetic fields are not time varying, then by Faraday's law, the electric field is curl-free. In this case, one can define an electric potential, that is, a function

.[2] This is analogous to the gravitational potential.

Parallels between electrostatic and gravitational fields

Coulomb's law, which describes the interaction of electric charges:

is similar to Newton's law of universal gravitation:

This suggests similarities between the electric field E and the gravitational field g, or their associated potentials. Mass is sometimes called "gravitational charge" because of that similarity.

Electrostatic and gravitational forces both are central, conservative and obey an inverse-square law.

where Δϕ is the potential difference between the plates and d is the distance separating the plates. The negative sign arises as positive charges repel, so a positive charge will experience a force away from the positively charged plate, in the opposite direction to that in which the voltage increases. In micro- and nanoapplications, for instance in relation to semiconductors, a typical magnitude of an electric field is in the order of 7006100000000000000♠106 V⋅m−1, achieved by applying a voltage of the order of 1 volt between conductors spaced 1 µm apart.

Electrodynamic fields are E-fields which do change with time, for instance when charges are in motion.

The electric field cannot be described independently of the magnetic field in that case. If A is the magnetic vector potential, defined so that

, one can still define an electric potential

which justifies, a posteriori, the previous form for E.

Energy in the electric field

If the magnetic field B is nonzero,

where ε is the permittivity of the medium in which the field exists,

its magnetic permeability, and E and B are the electric and magnetic field vectors.

As E and B fields are coupled, it would be misleading to split this expression into "electric" and "magnetic" contributions. However, in the steady-state case, the fields are no longer coupled (see Maxwell's equations). It makes sense in that case to compute the electrostatic energy per unit volume:

In the presence of matter, it is helpful in electromagnetism to extend the notion of the electric field into three vector fields, rather than just one:[5]

where P is the electric polarization – the volume density of electric dipole moments, and D is the electric displacement field. Since E and P are defined separately, this equation can be used to define D. The physical interpretation of D is not as clear as E (effectively the field applied to the material) or P (induced field due to the dipoles in the material), but still serves as a convenient mathematical simplification, since Maxwell's equations can be simplified in terms of free charges and currents.

The E and D fields are related by the permittivity of the material, ε.[6][7]

For anisotropic materials the E and D fields are not parallel, and so E and D are related by the permittivity tensor (a 2nd order tensor field), in component form:

For non-linear media, E and D are not proportional. Materials can have varying extents of linearity, homogeneity and isotropy.