Born at Greeneville, Tennessee, the only child of John McCardle, a shoemaker, and Sarah Phillips-McCardle, her father died when Eliza was still in her teens.[2] She was raised by her widowed mother in Greeneville, Tennessee. One day in September 1826, Eliza was chatting with classmates from Rhea Academy when she spotted Andrew Johnson and his family pull into town with all their belongings. They instantly took a liking to each other. Andrew Johnson, 18, married Eliza McCardle, 16, on May 17, 1827, at the home of the bride's mother in Greeneville. Mordecai Lincoln, a distant relative of Abraham Lincoln, presided over the nuptials.

At 16, Eliza Johnson married at a younger age than any other First Lady. She was rather tall and had hazel eyes, brown hair and a good figure. She was better educated than Johnson, who by this time had barely taught himself to read and spell a little. Johnson credited his wife for teaching him to do arithmetic and to write, as he had never attended school. She tutored him patiently, while he labored in his tailor shop. She often read aloud to him.

The Johnsons had three sons and two daughters, all born in Greeneville: 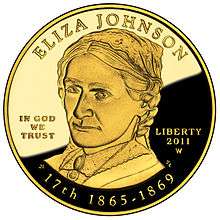 She supported her husband in his political career, but had tried to avoid public appearances. During the American Civil War, Confederate authorities ordered her to evacuate her home in Greeneville; she took refuge in Nashville, Tennessee.

A few months later after her husband became president, she joined him in the White House, but she was not able to serve as First Lady due to her poor health from tuberculosis. She remained confined to her bedroom there, leaving the social chores to her daughter Martha Johnson Patterson.[1] Mrs. Johnson appeared publicly as First Lady on only two occasions—at a reception for Queen Emma of the Kingdom of Hawaii in 1866 and at the president's birthday party in 1867.

After episodes of tuberculosis, Eliza died on January 15, 1876, at the age of 65 in Greeneville, Tennessee. She survived her husband by five and a half months.[2]