Born in Keytesville, Missouri, her father was a lawyer and her mother a pianist who had studied in Europe. She married her first husband, Carleton Hadley, a lawyer, in 1931. She met Carleton at Washington University in St. Louis. He became a prominent railroad attorney. They had two daughters before his death in 1944 at 42.

She married Vice President Alben Barkley, a widower, on November 18, 1949. She was his second wife, and he was her second husband.[1][2] At the time of marriage Barkley was 34 years her senior. He was 71 and she was 37. Barkley's first wife Dorothy had died in 1947. Until her courtship with Barkley, Jane Rucker Hadley had been a devoted Republican. In 1940, Mrs. Hadley was working in the St. Louis office of GOP presidential nominee Wendell Willkie. When her milkman expressed fondness for President Franklin Delano Roosevelt, she left a note saying, "No Willkie, no milkie". 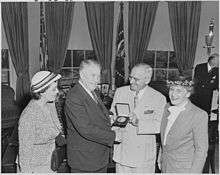 After meeting the young widow in May 1949 at a party in Washington, the Vice President courted her ardently. He was not deterred by her politics or a long-distance relationship. The Vice President began making regular commercial airline stops in St. Louis. Their courtship captured national attention. She resided in a seven-room apartment in the prestigious Central West End neighborhood of St. Louis, which is near both Washington University and the renowned Forest Park. She additionally owned a country estate in nearby St. Charles County near St. Louis. On October 31, 1949, they announced their engagement.

They married three weeks later, on November 18 in St. Louis at St. John's Methodist Church on Kingshighway Boulevard, now Link Auction Galleries. So many well-wishers filled the streets that the newlyweds had trouble getting into the Oldsmobile convertible he had given her. When asked about his wife's politics, the vice president said, "She got swept off her feet by Willkie, but now she's back in the fold." Her husband retired from the Vice Presidency in January 1953. He was elected for another term in the U. S. Senate in 1954, serving until his death in 1956.

After Barkley's death, Jane Barkley accepted a position as a secretary at George Washington University. Mrs. Barkley published a memoir in 1958 with Vanguard publishers of New York, named I Married the Veep. At the time of her death in 1964 from a heart attack, she was still employed at the aforementioned university in Washington, D.C.[3]