This article is about the wife of U.S. President Ulysses Grant. For other uses, see Julia Grant (disambiguation).

Julia Boggs Dent was born at White Haven plantation west of St. Louis, Missouri, the daughter of Frederick and Ellen Wrenshaw Dent, a slaveholding planter and merchant. Julia was one of eight children and "according to a biography of Grant posted to the White House Website Grant once wrote that her childhood consisted of "one long summer of sunshine, flowers, and smiles."[1] All her life, she suffered from a medical condition called strabismus (cross-eyed).

Julia attended the Misses Mauros' boarding school in St. Louis for seven years among the daughters of other affluent parents.[1] She excelled in art and voice. A social favorite in that circle, she met Ulysses at her home, where her family welcomed him as a West Point classmate of her brother Frederick. She soon felt lonely without him, dreamed of him, and agreed to wear his West Point ring.

Engagement and marriage to Grant

Grant proposed several times. When Julia finally accepted, they were sitting on the front steps of her beloved childhood home, White Haven, a picturesque plantation. In 1844, they embarked on a 4-year engagement, delayed by the Mexican-American War, during which they saw each other only once. They married on August 22, 1848 at White Haven when Julia was 22 and Ulysses was 26. Neither of their fathers approved of the match – hers because Grant's career-soldier prospects seemed bleak and his because the Dents were slaveholders. Grant's parents refused to attend the wedding but did accept Julia eventually.

The Grants' marriage was often tried by adversity and it met every test, as the couple gave each other lifelong loyalty. Like other army wives, "dearest Julia" accompanied her husband to military posts, where she passed uneventful days at distant garrisons. When he was ordered West in 1852, she returned to his parents' home.

In 1853 Ulysses Grant resigned from the army. Throughout the 1850s he had many failed businesses, including a farm near St. Louis. Around 1860, the Grant family moved to Galena, Illinois and Ulysses worked in a leather goods store owned by his father.[1]

The Grants had three sons and a daughter:

Ulysses Grant returned to the army from 1861-1868, during which time Julia would often travel to the battlefields to see him. It was said that when she would visit they would sit together holding hands.[1] Throughout the war, Julia lived at Walter Place, an Antebellum mansion in Holly Springs, Mississippi.[2] When Confederate General Earl Van Dorn raided the house, he was not permitted by the pro-Union owner to enter before she went outside.[2] 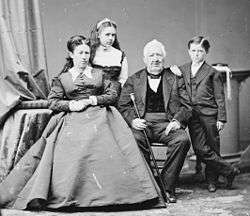 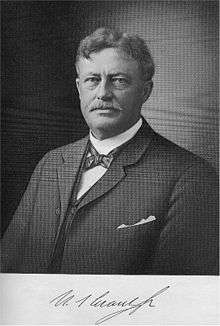 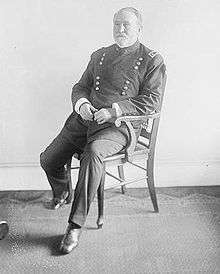 After many years of hardship and stress, Julia rejoiced in her husband's fame as a victorious general and she entered the White House in 1869 to begin, in her words, "the happiest period" of her life and "I am very fond of society and enjoyed to the fullest extent the opportunity afforded me at the White House." [3] With Cabinet wives as her allies, she entertained extensively and lavishly. The social highlight of the Grant years was the White House wedding of their daughter in 1874. Contemporaries noted her finery, jewels, and silks and laces. After four years of war, an assassination, and an impeachment trial, Washington was ready for a little levity, and Julia obliged. She offered a full array of events and became a popular hostess. She planned lavish state dinners, where guests enjoyed expensive wines and liquors.

However, she was the first president's wife to close the White House grounds to visitors.[4]

As First Lady, it was suggested to Julia that she have an operation to correct her crossed eyes, but President Grant said that he liked her that way.[5] He said, "I might not like you half so well with any other eyes."[4]

Julia was the first First Lady recorded on film.[6]

Upon leaving the White House in 1877, the Grants made a trip around the world that became a journey of triumphs. Julia proudly recalled details of hospitality and magnificent gifts they received. A highlight of the trip was an overnight stay and dinner hosted for them by Queen Victoria at Windsor Castle in England. They also enjoyed a swing through the Far East, being cordially received at the Imperial Palace in Tokyo by the Emperor and Empress of Japan.

In 1884, Grant suffered yet another business failure and they lost all they had. When U. Grant was ill with throat cancer, he began to write a memoir, which he finished in 1885, just shortly before his death. The book was a success and earned $500,000 which Julia was able to live on. Though she was once quoted as saying "I may be old-fashioned. I don't like this modern movement.... And yet, there are certain sorts of work a woman may well do; teaching, being governess, or any taking care of children," she was inspired by her husbands book and went on to write her own memoir.[7] Publishers did not want to print her story, and it was not printed until 1975.

Julia Grant was the first First Lady to write a memoir, though she was unable to find a publisher, and had been dead almost 75 years before The Personal Memoirs of Julia Dent Grant (Mrs. Ulysses S. Grant) was finally published in 1975. She had attended in 1897 the dedication of Grant's monumental tomb overlooking the Hudson River in New York City. She was laid to rest in a sarcophagus beside her husband. She had ended her own chronicle of their years together with a firm declaration: "the light of his glorious fame still reaches out to me, falls upon me, and warms me."[8]